First and foremost, Porsche wanted to create a new sports car that looks great, is completely unique and just happens to be electric. The Taycan is the first EV that has made us think that it’s worth the hassle. 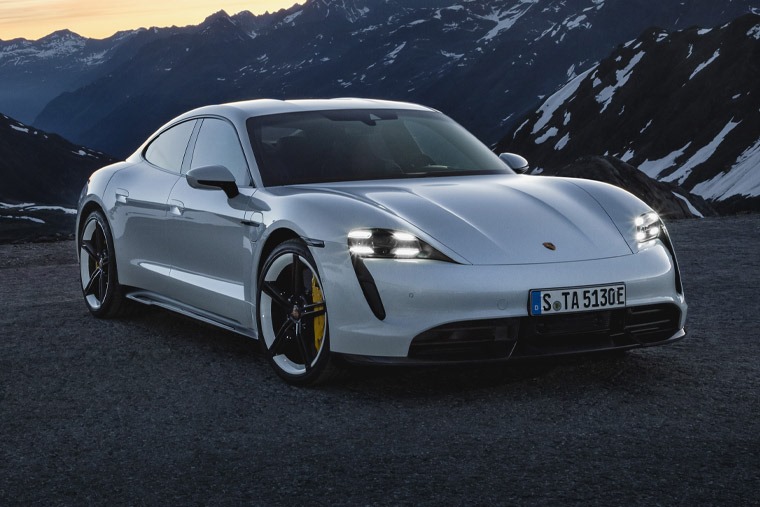 Howard Ritchie’s back with another video review for us, this time he took the Porsche Taycan Turbo S for a spin. We gave Mr Ritchie seven questions to answer whilst he was in the company of such a magnificent machine, and that he did.

You can simply watch the full review here, or if you prefer to read about it, here’s everything you need to know.

The Porsche soul stands for performance, and performance has been provided. The Taycan is Porsche’s first all-electric car, with rear-wheel drive to enhance the drivers engagement.

Porsche’s DNA is comprised of three design attributes that describes every vehicle: timeless, puristic and instantly recognisable. There’s nothing new with the all-electric Taycan. The floating design of the new headlights gives the Taycan a distinctive identity, while the four-point LED signature is an unmistakeable expression of Porsche DNA along with rear design that features a seamless light strip made from glass, as well as the ‘Porsche’ logo in glass look.

The Taycan is available in four different trims and six different engines but whichever version you choose there’s one remaining factor, this car runs purely on electricity which charges 80% in just 23 minutes.

If you’re in the market for a sports-car then look no further. The Turbo S has 680hp, rear-wheel drive and gets a 0-62mph time in an astonishing 2.6 seconds, the Taycan Turbo S is faster than the Mclaren 650S, Ferrari 488 and Lamborghini Centenario. 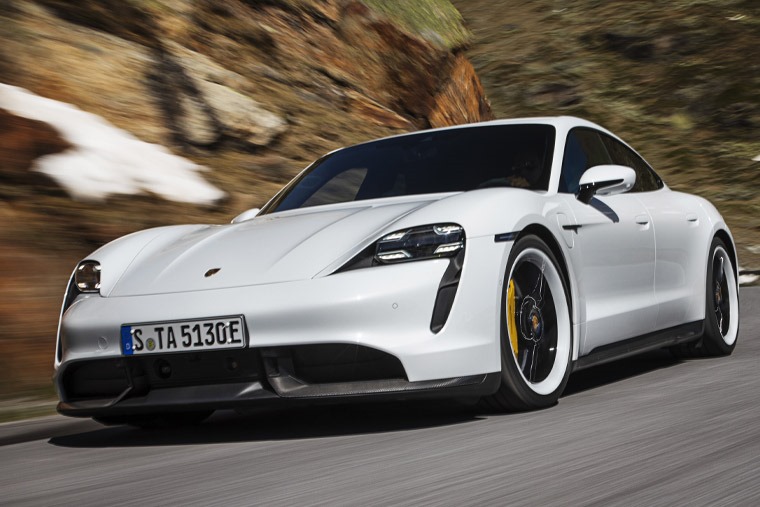 According to the RAC, depending on which model you get, the Taycan is capable of around 205-216 miles whilst the performance batteries will allow you to get from 268-301 miles. However, Porsche say those numbers are more like 286-324 miles. Worst case scenario, it will cost you around £26 to charge it out and about or £12-14 to charge it from home.

This is a big car, 2.2 tonnes, yet you would not believe how well this thing goes round a corner.

Howard set off on the day with a starting charge of 88%, which is the equivalent to 188 miles and he wanted to see how well the battery performed. Carry on reading to find out the results. 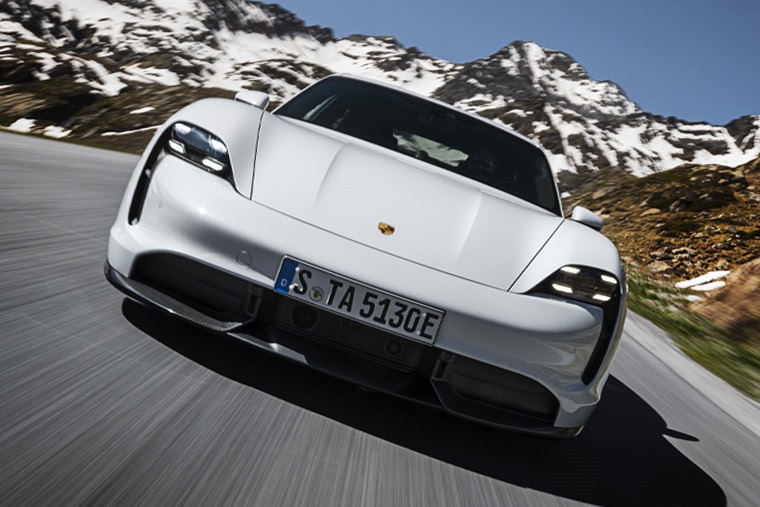 Top tip: Select the additional sound mode called: “Electric Sport Sound”. This gives the car almost like a sub-rumble sound which will in-turn scare people away when you’re facing tough competition to find a parking space.

You’ve got up to four screens to choose from in the Taycan. Your passenger has their own screen to control things such as: the radio, heating, maps etc.. The drivers sleek virtual cockpit is fully customisable and looks the part. Finally, the two central consoles are connected to each other – the bottom screen controls the top with the clever handwriting tech to make the user experience easier and more enjoyable. However, Howard found this to be a little complicated as he spent all morning trying to get the heat on his feet.

Tesla still has the best user interface in the world, but the Taycan has the better looking cockpit and better materials.

The alternative to fiddling around with the screens is to simply ask the car to complete certain tasks and it will. But is it better than Tesla? No. Tesla still has the best user interface in the world, but the Taycan has the better looking cockpit and better materials. 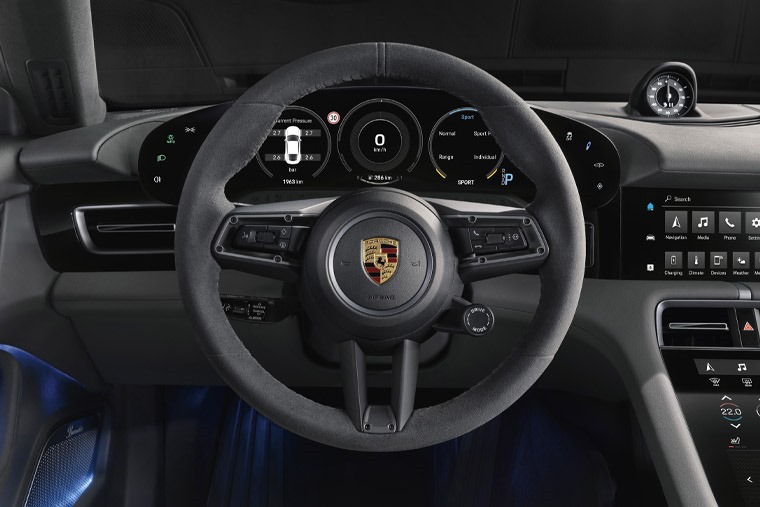 Unlike the 911, it’s quiet spacious for your backseat passengers. Two seats are standard in the rear, but you can opt for a third seat in the back at an extra cost. Boot space is good too, the Taycan has two to choose from. The rear has a capacity of 444 litres which is roughly the same size as a BMW 3 Series and the front bonnet is handy for bits and bobs.

It may not have the shout and the roar of a furious supercar, but it’s something special in its own right and could be considered as the best EV on the road today. Porsche have created a brand new product, for a new customer, which has made Howard think that this could be the first EV that’s worth the hassle.

It doesn’t seem that Porsche has tried to compete with Tesla or VW, both of those cars have more range. First and foremost, they wanted to create a new sports car that looks great, is completely unique and just happens to be electric. 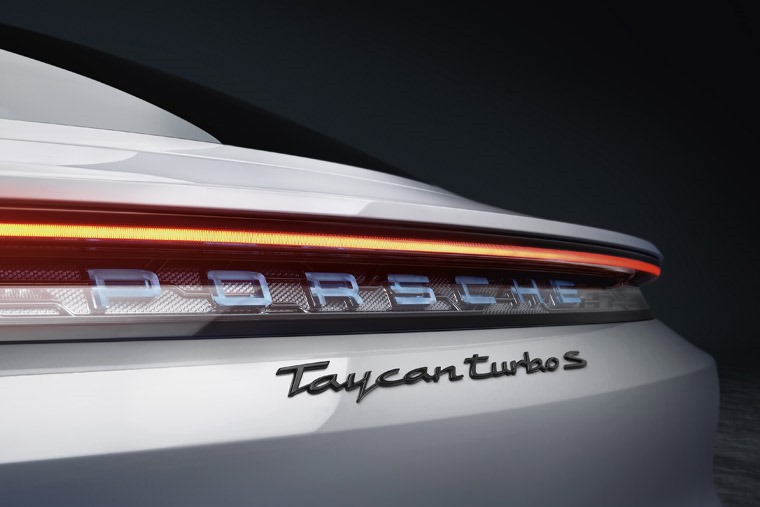 It’s something special in its own right and could be considered as the best EV on the road today.

It’s highly unlikely, but if you’re using the Taycan to do your weekly shop, you might struggle. The Taycan is surprisingly large, nearly the same size as a Range Rover – it’s 5 metres long and 2.8 meters wide. This could become tricky when finding a parking space, but lets be honest, if you’re thinking about leasing a Taycan “you don’t go to Sainsbury’s do you… Ocado innit,” says Howard.

As previously mentioned, Howard wanted to see how Taycan’s battery performed after a running time of 6hrs 51min and 40.4 miles covered. The outcome? 52% remaining battery (104 miles), the total usage of the whole day, 36% (84 miles).