A brief history of… the Toyota RAV4

For the longest of time, the Toyota RAV4 stood as the sensible and attainable SUV for your average motorist. Long before the word ‘crossover’ was ever uttered in a marketing meeting, Toyota created the Recreational Active Vehicle 4-wheel drive (RAV4) to act as a bridge between utilitarian off-roaders and regular vehicles.

As the fifth generation of Toyota’s famed SUV launches onto UK roads in pure hybrid form, we take a look back at the auspicious beginnings of the Rav4 from concept to now. 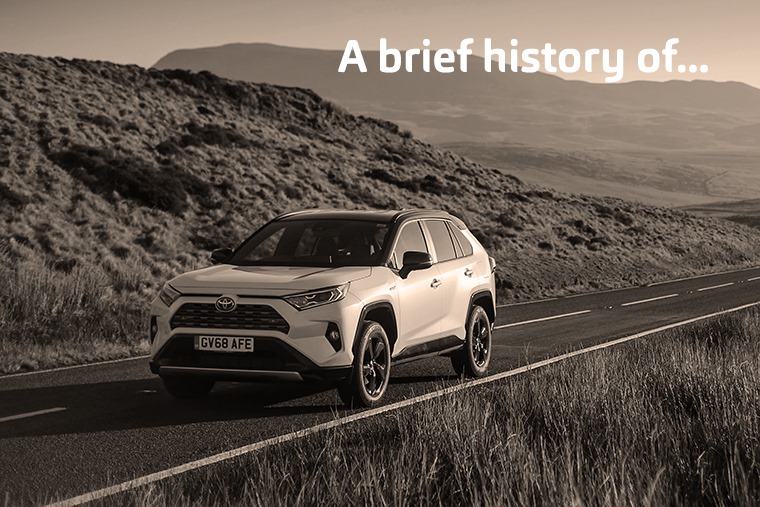 The RAV4 has its beginnings at the 1989 Tokyo Motor Show. Offering the height, ground clearance and muscular looks of your traditional 4x4 but paired with a car-like bodyshell, the concept set tongues wagging but more work was seen to be required. Refined and remodelled for the 1993 Tokyo Motor Show, it was a much closer look at what would launch in 1994.

With parts borrowed from across the entire Toyota range – from the Corolla’s platform to the Camry’s engine – the first generation RAV4 was launched in June 1994 in the UK as a two-door, four-seat model. With permanent four-wheel drive, the first-gen RAV4 was offered with a 2.0-litre four-cylinder engine running through a five-speed manual or four-speed auto. This gave the car plenty of performance to differentiate it from the sluggish 4x4s on the market. 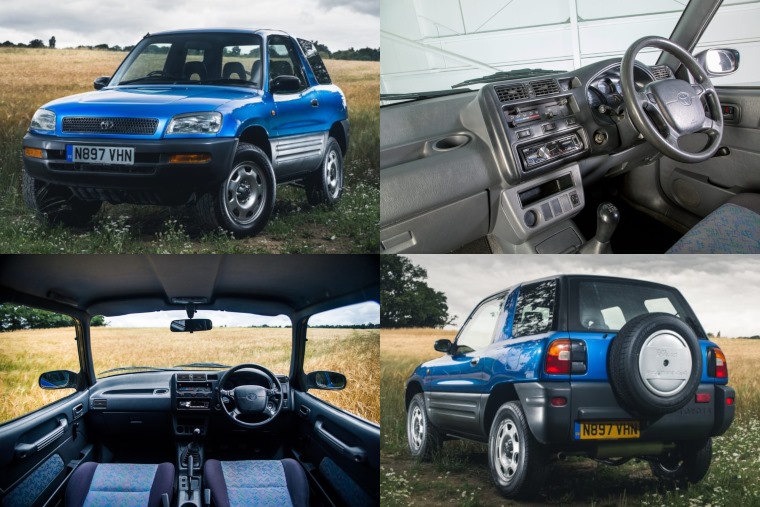 The first-generation RAV4 was initially offered as a two-door.

Thanks to its compact size, car-like handling and accomplished off-road abilities, the RAV4 was different enough to become an instant hit and the production run immediately doubled. However, it wasn’t without its issues as most people felt the rear-passenger space was woeful and the boot space was severely lacking. The following year Toyota launched a four-door model to address this feedback, increasing the overall length of the vehicle by 400mm. This was followed in 1998 with a mid-life refresh which increased power, improved refinement and added more equipment and safety features.

When the second-generation RAV4 was launched in 2001, it found itself with some company. Over the preceding seven years a variety of car-based SUV rivals had launched including the Honda CR-V, Suzuki Grand Vitara and Land Rover Freelander. To take the challenge to them, the new RAV4 was longer, wider and roomier than the previous model without becoming any heavier. Unlike the first-gen model, only a minority of parts were taken from elsewhere in the Toyota range too. 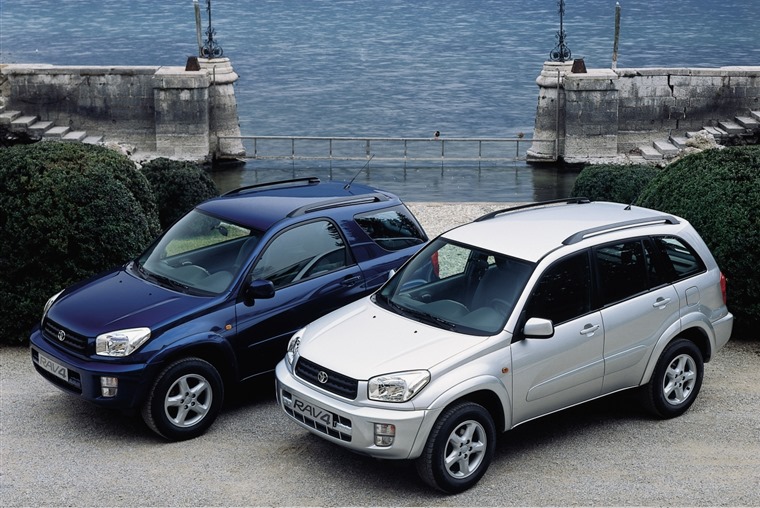 Two and four-door models were offered once again, both with a side-opening tailgate, as was a five-speed manual or four-speed auto. A 2.0-litre engine offering 148hp was one choice, as was a more economical 2.0-litre turbo diesel which was differentiated across the range via a bonnet scoop which directed air over the top-mounted intercooler.

On the inside, the range offered rear seating which could be split, folded, slid fore and aft and even removed entirely if you needed the additional space. Versatility was the name of the game. The 2004 facelift saw a petrol unit offered for the first time, offering 161hp in 2.4-litre guise.

When it came to the third-generation RAV4, maturity seemed to be the key word when it was launched in 2005. Only offered as four-door model in the UK, size once again increased by 130mm while ground clearance became 10mm higher at 200mm.

Perhaps the biggest change, even bigger than no longer offering a two-door model, was Toyota’s decision to do away with full-time all-wheel drivetrain in favour of a part-time system with traction and stability controls. 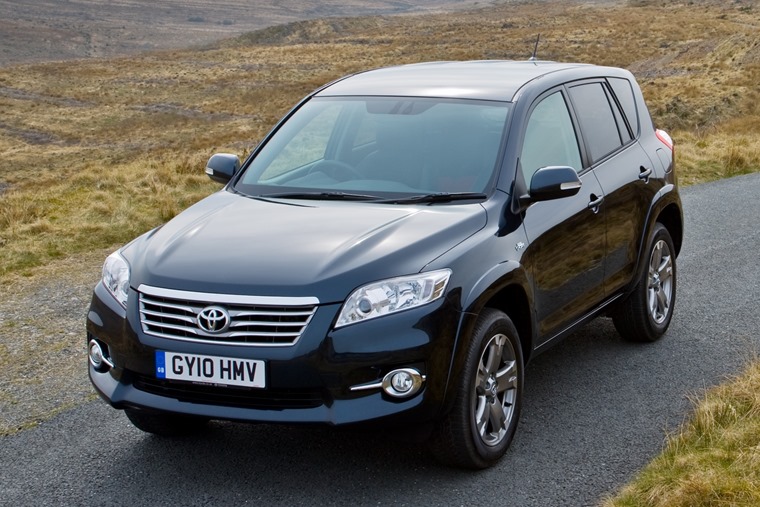 The engine range grew again, with eight different petrol or diesel engines available from a 2.0-litre four-cylinder to a gutsy 3.5-litre V6. Transmission options also increased to include five- or six-speed manuals, and an incredible four-, five-, or six-speed automatic gearbox.

The SUVs bodyshell was also 76% stiffer than the outgoing model which led to improved safety and durability and reduced road noise. These safety credentials were further improved upon in 2008 and 2011, with subtle revisions ahead of the fourth-generation’s release.

When the fourth-generation RAV4 did come to the market in 2013, following its reveal at the 2012 Los Angeles Auto Show, the automotive landscape had shifted slightly away from the original RAV4’s stated aims of providing a compact SUV that offered car-like handling and accomplished off-road abilities. Undermined thanks to the crossover boom started by the Nissan Qashqai in 2007, the model had a lot to prove. 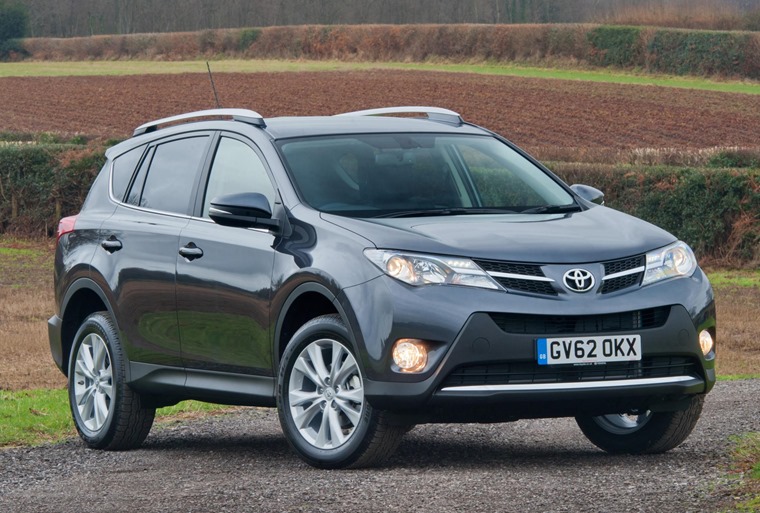 Sales were ten times higher than when the first-gen model was originally launched. Going back to basics, the fourth-gen model shrank 50mm in length and 25mm in height, although it grew slightly in width. Another change was to the tailgate, switching from side-hinged to a more traditional boot design. Erring away from the Toyota RAV4’s initial MO even further, the only way to have 4WD was to opt for the petrol option, with the smooth diesel-powered model front-wheel-drive only.

The biggest change, and a sign of things to come, came in 2016 when the range was expanded to introduce a petrol-electric hybrid model in response to air quality concerns. With 4x4 optionally paired to the hybrid engine, it quickly came to account for two-thirds of all RAV4 sales in the UK and took the fight to the Mitsubishi Outlander PHEV.

Perhaps this is why Toyota took the decision to only offer the fifth-generation RAV4 in hybrid guise. Despite once announcing itself as the ‘King’ of diesels in the UK, offering the widest range of diesel engine derivatives of any manufacturer, Toyota obviously saw the way the market was turning. 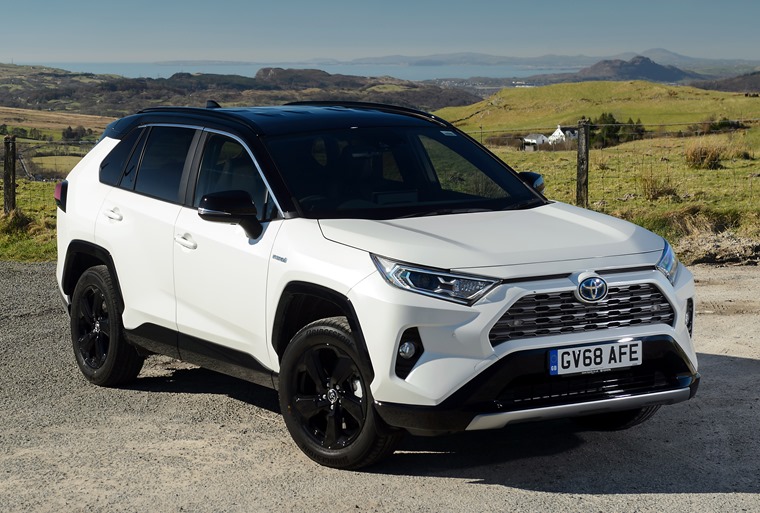 Is the fifth-gen all-hybrid Toyota RAV4 the car of today?

With the fifth-generation, the RAV4 has finally morphed from the Barbie beach cruiser look of the first-gen model to the rugged SUV it once tried to differentiate itself from. Sharper body contours, angular headlights and a much more prominent grille feature. It’s taller and slightly longer than before too.

All models feature a 2.5-litre hybrid engine available in either 2WD or AWD to offer high torque, low emissions and reduce fuel consumption.

Still new to market, it remains to be seen if the fifth-generation RAV4 can continue the success it has seen previously. Judging by the models ability to evolve and improve with each iteration, as well as change with the times, the future is certainly bright.

Read our full review of the new Toyota RAV4 here.