The Alfa Romeo Stelvio QV takes everything fantastic about its Giulia QV sibling and transposes them onto an SUV that’s practical enough to use every day. 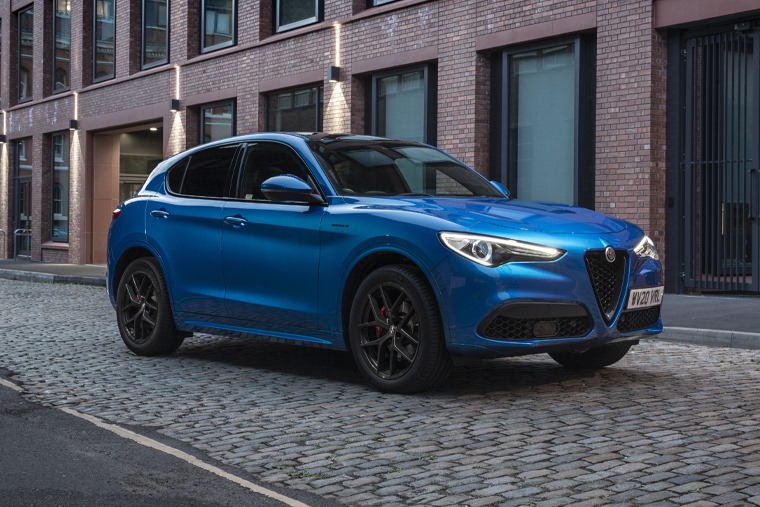 As the BMW X3 is to the BMW 3 Series, so the Alfa Romeo Stelvio is to the Alfa Romeo Giulia. To put that another way, it’s a mid-sized family SUV, based on many of the same components as its saloon-shaped sibling but with a far more practical (and, judging by the sales numbers of SUVs and crossovers, more desirable) body on top.

But the Quadrifoglio Verde, or QV, means this Stelvio isn’t just a family SUV - it’s a family SUV that’s been breathed on by Alfa Romeo’s performance wizards and endowed with a huge amount of power, totally reworked chassis and numerous other advancements intended to make it truly thrilling to drive.

This sort of thing would have been unheard of a few years ago, but nowadays there are plenty of fast SUVs to compete with. The Stelvio QV guns directly for cars like the Mercedes-AMG GLC 63 S or Porsche Macan Turbo, or it could be the logical next step up for somebody who already owns a junior SUV such as an Audi RS Q3 or Volkswagen T-Roc R.

So, in essence, this takes an existing super-saloon - the Alfa Romeo Giulia Quadrifoglio - and puts it on stilts.

Underneath the lightweight, carbon-fibre bonnet the Stelvio QV uses a remarkable 510hp twin-turbocharged V6 engine. It’s a responsive and massively powerful unit, brimming with character - and it’s paired up to the same slick-shifting eight-speed automatic gearbox as the standard Giulia QV. 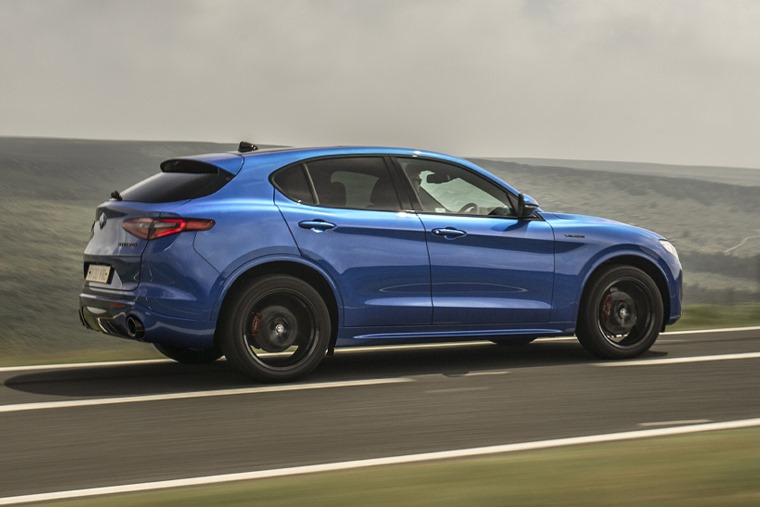 The Stelvio QV is a little different to its saloon sibling, though for two main reasons. For a start, you sit much higher off the ground, but the Stelvio is also fitted with four-wheel drive.

From a standing start, thanks to all-wheel traction, it’ll reach 62mph in just 3.8 seconds, a barely measurable 0.1 seconds ahead of the Giulia.

This has the unexpected result of making the heavier, bulkier, Stelvio quicker to 62moh than it’s lithe Giulia sibling. From a standing start, thanks to all-wheel traction, it’ll reach 62mph in just 3.8 seconds, a barely measurable 0.1 seconds ahead of the Giulia. It also removes some of the drama from fast cornering but, if you’re not an especially adventurous driver, that might be a plus point. We’d wager many enthusiasts will feel a bit short-changed by the Stelvio QV’s comparative stability and composure, though. 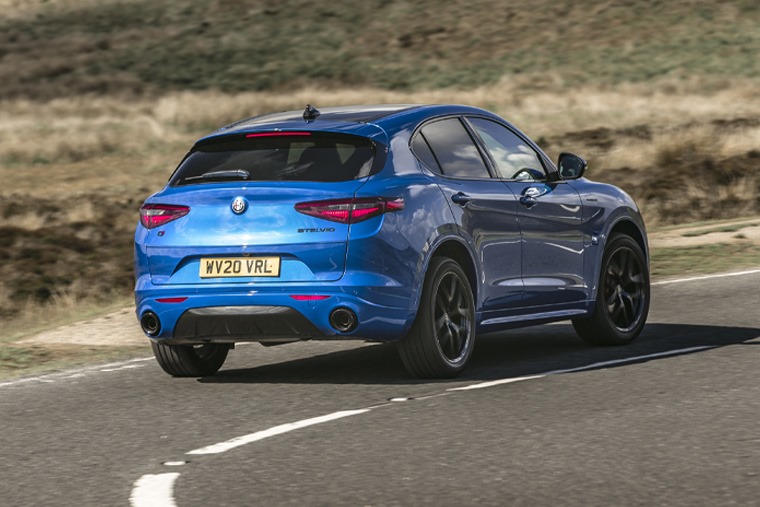 That’s only in comparison to the Giulia, of course - when driven next to other SUV rivals the Stelvio QV feels positively light on its feet. And it is, relatively. At around two-tonnes, it’s no lightweight, but it’s as much as 500kg lighter than some of its rivals.

Naturally, all of this power and performance comes with a high price, and you’ll certainly be paying for it at the pumps. The Stelvio QV will just about crack 25mpg if you drive extremely carefully (I didn’t drive particularly gently, and managed just 18.2mpg…), and its CO2 emissions and company car tax are high too. 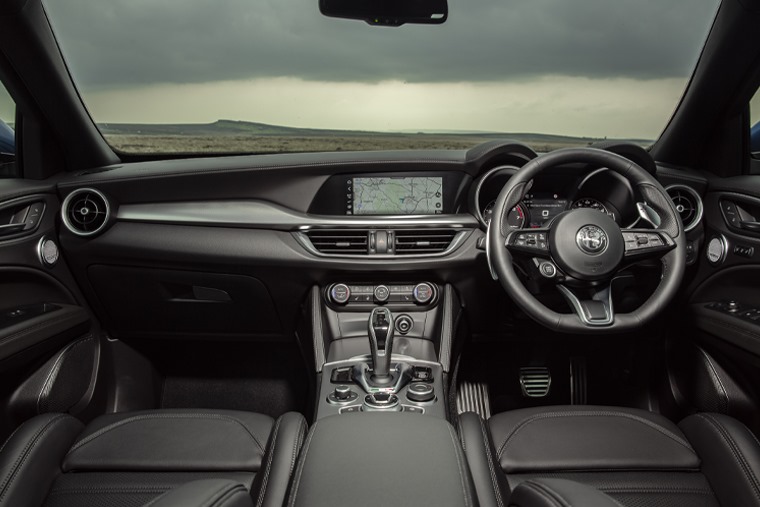 Initially, the Stelvio (and its Giulia sibling) suffered from interiors that were style over substance - they looked good but felt desperately cheap and tacky. A facelift earlier in the year went a long way towards addressing that, and now the Stelvio QV has an interior deserving of the rest of its package.

The driving position, in particular, is nearly perfect, with a lovely-feeling steering wheel and the best gearshift paddles in the business.

That means it feels high quality across the board, with niceties such as a digital instrument panel and big infotainment display with smartphone connectivity. Better yet, the fundamentals are still as correct as they ever were - the driving position, in particular, is nearly perfect, with a lovely-feeling steering wheel and the best gearshift paddles in the business. 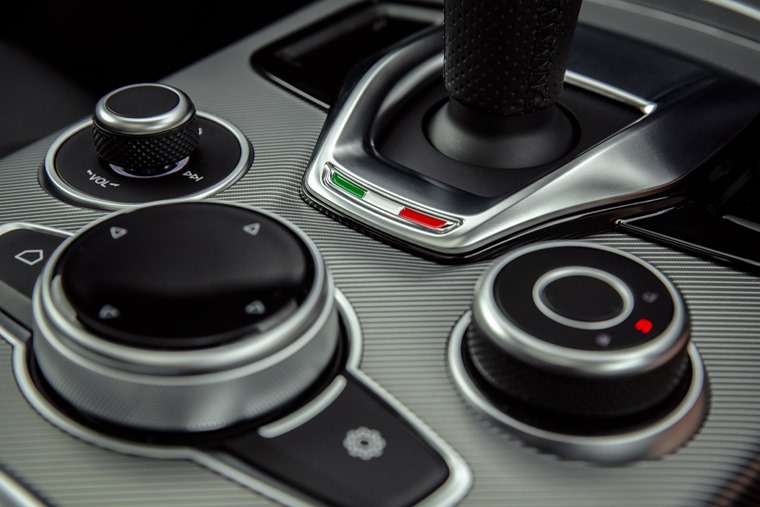 It is a bit dark and claustrophobic inside though, despite its bulk providing plenty of space, and considering the Stelvio Quadrifoglio is a costly car, it’s a shame there aren’t more features inside to surprise and delight.

Of course, an SUV has to be practical, otherwise what’s the point? Luckily the Stelvio is excellent in this regard - there’s room for two six-foot adults in the rear seats, and while the boot volume is a little bit smaller than some of its rivals it’s nevertheless a very square, wide and easy-to-load area.

Keen drivers will struggle to find an SUV they enjoy more.

The Alfa Romeo Stelvio QV takes everything fantastic about its Giulia QV sibling and transposes them onto an SUV that’s practical enough to use every day. It’s pricey and thirsty, but so are its rivals - very few of them can match the Alfa’s character, though.

A hugely powerful engine, pretty and practical SUV body and that added bit of Italian soul? Keen drivers will struggle to find an SUV they enjoy more.

Alfa Romeo Tonale: Everything you need to know