Say hello to the new BMW 1 Series – a car that’s aiming to take on on the latest A-Class and upcoming VW Golf MK8 simultaneously. Priced from £24,430 up to £32,470 for the 120d xDrive Sport, lease deals are available now ahead of its imminent arrival.

Featuring a front-wheel drive platform for the first time, a complete exterior redesign and tonnes of new tech, here’s all you need to know about the third generation of BMW’s most compact model… 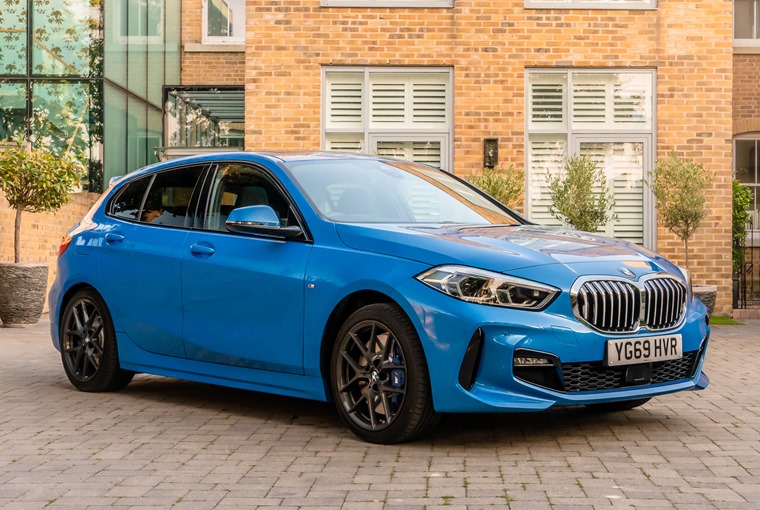 Externally, there’s been a lot of changes. Up front, a much more prominent grille is now present – it’s not quite the size of the X7’s, but the larger kidney grille is now much more in-keeping with the latest BMW products.

The headlight arrangement has also been redesigned, and BMW claim it has a more ‘wedge-shaped’ silhouette than its predecessor. The window line is also higher than before, while BMW’s trademark Hofmeister kink is incorporated into the C Pillar. 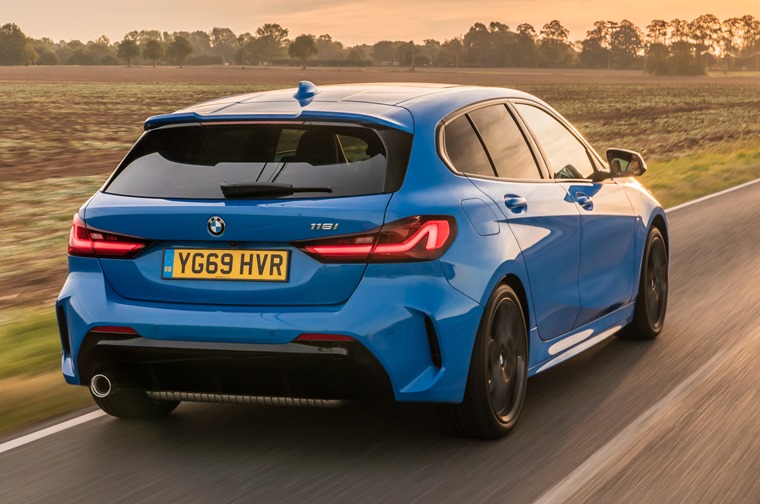 The biggest news, however, is that the new 1 Series features a front-wheel drive platform rather than BMW’s traditional rear-wheel drive layout. While this is likely to be contentious for some who prioritise driver involvement above anything else, the new platform has been designed to retain BMW’s driver-orientated characteristics.

On the inside, the cabin is very driver-orientated as is the BMW way. It’s also more spacious than before, offering 19mm more rear headroom and 42mm more elbow room in the front. Luggage capacity has risen to 380 litres, while an electrically operated boot lid is available for the first time.

BMW Head-Up Display, which uses sensors at both the front and rear to warn and prevent collisions with obstacles located to the side or rear of the vehicle, also debuts on the 1 Series. A rear-view camera is an option. 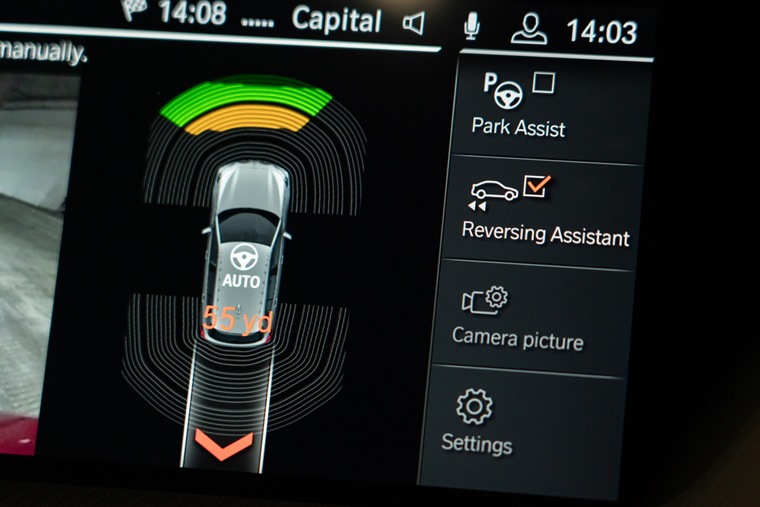 Infotainment-wise, the new 1 Series features BMW’s latest iDrive sytem that’s operated via a 9in touchscreen angled towards the driver. A 10in screen is also available, as is gesture control. If you decide to opt for the bigger screen you’ll also get a digital driver display that replaces analogue dials in front of the driver.

BMW’s Intelligent Personal Assistant is also available – it’s much like Mercedes’ MBUX ‘Hey Mercedes!’ system. It allows you to operate things such as the satnav, climate control and heating by saying ‘Hey BMW’ and without interacting with the infotainment screen and controls themselves.

Trim levels from launch will include SE, Sport and M Sport, as well as the range-topping M135i xDrive, all of which differ from one another in both exterior and interior details. SE comes with matt black air guide grilles on the front bumper, while Sport adds exclusive air inlets finished with a high-gloss black, the kidney grille features a chrome frame with high-gloss black struts.

The M Sport features aerodynamic bodystyling as well as satin aluminium struts in the kidney grille whilst the seat upholstery is in Dakota leather with contrast stitching. 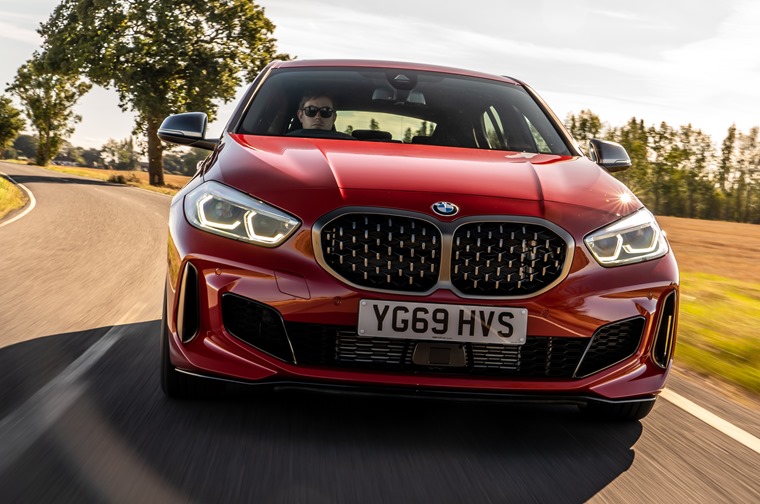 The all-new BMW 1 Series is powered by three-cylinder and four-cylinder engines with a choice of three diesel and two petrol engines at launch, with the range kicking off with the 1.5-litre 118i. This produces 140hp and can get the 1 Series from 0-62mph in 8.5 seconds. A 1.5-litre diesel badged as the 116d gets 117hp and a 0-62mph time of 10.3 seconds, although it can return more than 70mpg.

The 118d is a 2.0-litre diesel with 150hp and a 0-62mph time of 8.5 seconds, while a more potent version of this engine is found in the 120d xDrive Sport which gets four-wheel drive. A six-speed manual is standard on the lower powered models, while automatic gearboxes are available across the range. 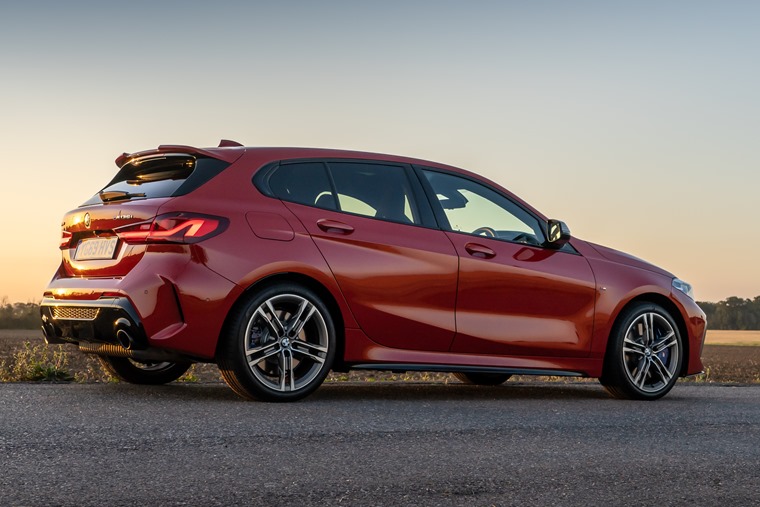 The range topping M135i xDrive features a 308hp four-cylinder turbo petrol engine – enough for a 0-62mph time of 4.8 seconds and a top speed of 155mph.

It’s aimed to rival the likes of the VW Golf R and new Mercedes-AMG A35 and gets sports additions such as a limited-slip diff to improve traction, a sports suspension set-up and a 50:50 front-rear power split. This model also gets its own design tweaks such as a mesh-style front grille, large 18in alloy wheels and a rear spoiler.

The all-new BMW 1 Series will be available for customer delivery from late September with lease deals on the new model available now.