Evolution more than revolution, the new Mercedes-Benz A-Class offers drivers an impressive amount of connected and interactive technology. With its its class-leading refinement and comfort, it's lost no appeal.

The Mercedes-Benz A-Class is one of the most popular cars on our site. On point interior, cutting edge tech and of course affordable monthly rates make it extremely attractive. But can it handle Swindon’s infamous ‘magic roundabout’? 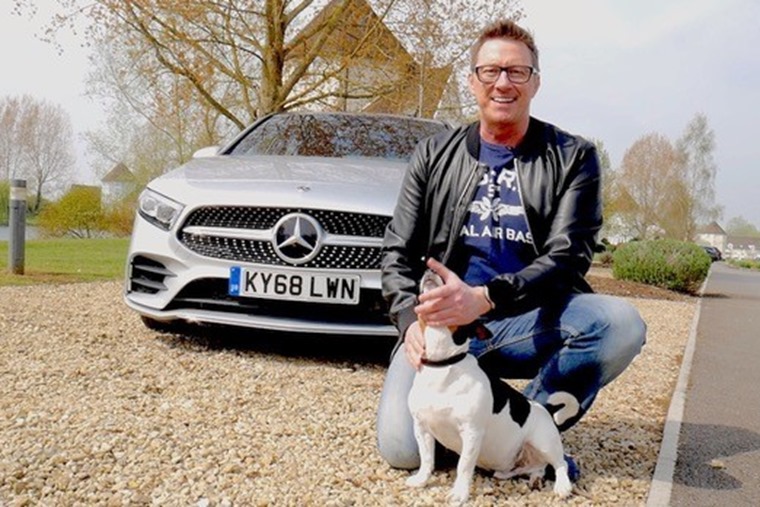 Howard Ritchie endeavours to find out. You can watch his video review below, or alternatively read on for our full thoughts on Mercedes’ premium hatchback.

Guess where the biggest market in the world for the Mercedes A-Class was in 2017? Nope, not the USA or Germany, but here in the UK and much of that success is down to leasing.

A total of 43,717 new A-Class found a home here last year, so this all-new fourth generation model is a big deal for Mercedes and drivers over here. 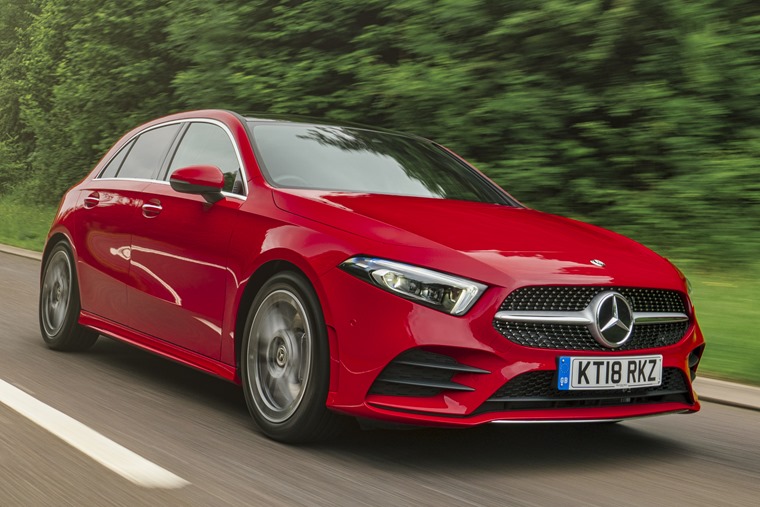 While note quite in the same league as the Ford Focus or Volkswagen Golf for outright sales, it was enough to put the A-Class in the top ten overall and well ahead of its rivals from Audi and BMW. Little wonder then that Mercedes has preferred gentle evolution rather than revolution for this car.

Is that damning the car with faint praise? Well, there’s certainly a strong whiff of by-the-numbers thinking here as the car has 10% better all-round visibility from the driver’s seat, the boot is 29-litres bigger than before and its 14mm wider and 30mm longer.

None of that comes as a surprise as almost every new car offers more space and practicality than its predecessor – it’s what the market demands and is the nature of evolution. Where this A-Class breaks new ground is with the amount of connected and interactive technology provided either as standard or from the options list.

When you want to change the cabin temperature you simple say “Hey Mercedes, I’m cold” and it will turn up the heating.

Every version comes with MBUX, which is the Mercedes-Benz User Experience, and Hey Mercedes.

The former of these is the first time it’s been used in a car from the Three Pointed Star and it uses artificial intelligence to learn your preferences and tailor the display on the central infotainment screen. It can also receive updates via the car’s wifi connection for functions such as the standard satnav. 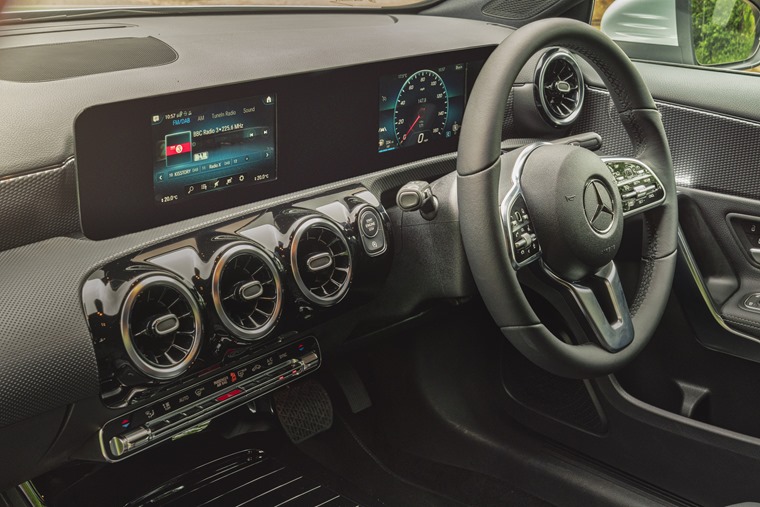 Then there’s Hey Mercedes, which works with MBUX to give a more intuitive voice command system. The idea is the system adapts to the driver’s voice rather than the human having to use set commands the computer recognises. For example, when you want to change the cabin temperature you simple say ‘Hey Mercedes, I’m cold’ and it will turn up the heating.

It’s a clever bit of kit, but the only problem is it only worked around once in every three attempts during our time with the car. Luckily, there are easy to use ventilation controls for the air conditioning, but other functions take longer to access through the touch pads on the steering wheel or centre console so you can scroll through to the relevant menu. 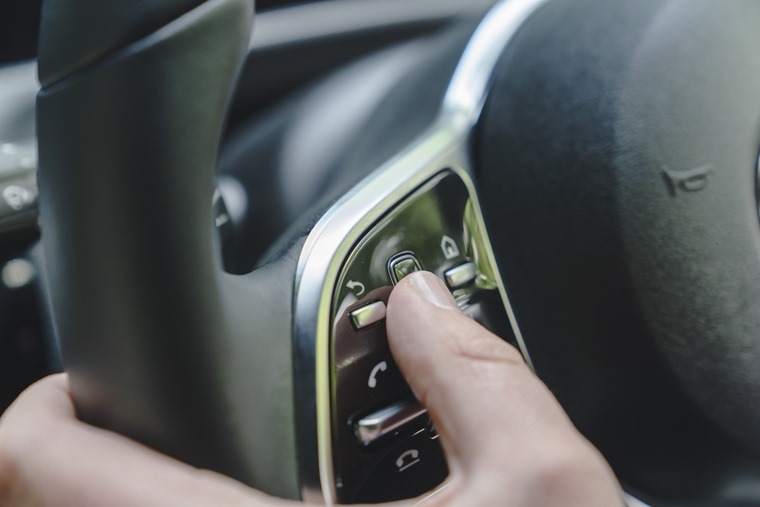 Still, it’s easy to hook up your smartphone to the car and there’s wireless charging available. You can also opt for the £495 augmented reality navigation display that shows a camera image of the road ahead on the central display with overlaid directions to make it easier to spot where you need to turn.

The latest S-Class ... has also inspired the general look and feel of this A-Class’ cabin

As for screens, the infotainment and main instrument monitor come as seven-inch displays as standard or you can choose the Executive pack to gain a 10.25-inch centre monitor. This pack costs £1,395 and comes with heated front seats, Active Park Assist with Parktronic and the Mirror phone kit too. To get the second screen in the larger size, you need the Premium package for £2,395 that creates a widescreen affect as both displays join together.

Mercedes is predicting very strong residuals for the A-Class, which should make it just as appealing to lease customers as the previous model

This is very similar to the information screen in the latest S-Class, which has also inspired the general look and feel of this A-Class’ cabin. You get the classy round air vents in the upper dash, as well as buttons that have that well damped Mercedes feel. All of the materials inside feel substantial, so this is a small Mercedes in exterior dimensions only.

Inside, you won’t hear any complaints about space as the front occupants have plenty of room and lots of adjustment to fettle the seating position. Improved visibility for the driver makes parking simple and the automatic gearbox fitted to the cars we tried is operated by the right-hand column stalk.

In the rear quarters, Mercedes has 22mm more shoulder room, 36mm greater elbow space and an extra 8mm of head clearance. The result is a six footer can sit in comfort behind someone of similar stature on the front seat. Anyone sitting in the middle back pew is less well served due the transmission tunnel that’s there for the 4Matic all-wheel drive versions that will follow after launch. However, this doesn’t detract from the boot growing to 370-litres with the seats up to offer excellent load capacity.

Now, what about the driving side of this A-Class? Well, there’s a choice of 1.4- and 2.0-litre turbo petrol engines in the A200 and A250 respectively.

The smaller of the two comes with 163hp and covers 0-62mph in 8.0 seconds while offering a combined economy of 51.4mpg and 123g/km CO2 emissions. It does a decent job of powering this Mercedes and is quiet at all times, but it’s not as much fun as a BMW 118i. 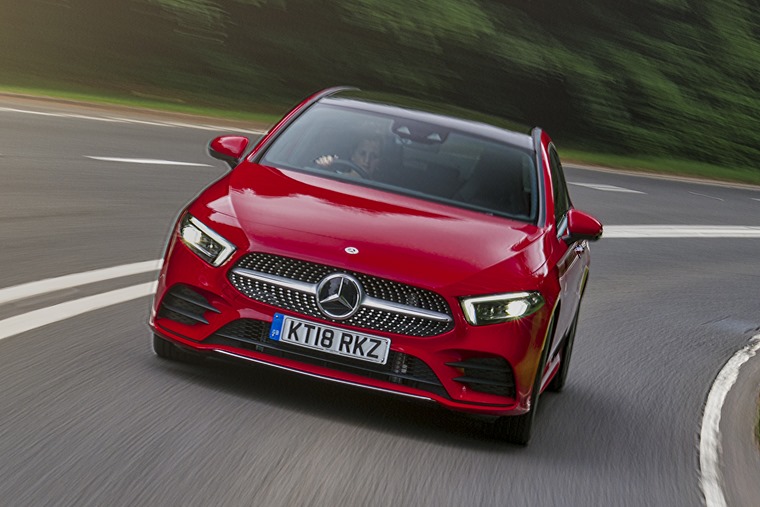 For more performance, the A250 has 224hp to give 0-62mph in 6.2 seconds, along with a 155mph top end, 45.6mpg and 141g/km. Those figures are with the standard seven-speed automatic gearbox with this model and those above for the A200 are also with an auto transmission as the six-speed manual will not arrive till late in 2018.

The same is true for the A180d that will make up more than half of A-Class sales. This 1.5-litre turbodiesel may only boast 116hp, but 192lb ft of torque spread between 1750- and 2500rpm make it very flexible. It’s also hushed at all speeds and saunters through the automatic gearbox efficiently to make this a very easy car to live with. Add in 68.9mpg and 108g/km emissions and it’s good, if not class leading on costs. 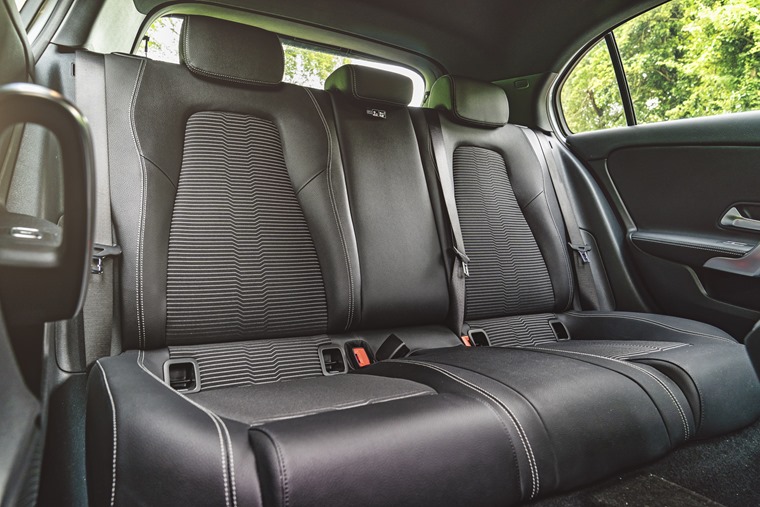 Whichever engine you choose, though, the A-Class does not provide the same driver involvement as a BMW 1 Series or Ford Focus. The ride tends to bounce over bumps or, if you choose the Sport setting in cars fitted with the optional adaptive suspension, it becomes too firm. A happy medium between the two would be the ideal but is not offered.

There are three trims for UK buyers, starting with the SE that has the twin 7in display screens, satnav, Active Lane Keeping Assist that can intervene all too abruptly, air con and 16in alloy wheels. The Sport gains LED headlights, 17in wheels and climate control, while the AMG Line gets 18in alloys, AMG body styling, Mercedes’ man-made leather upholstery and a three-spoke sport steering wheel. 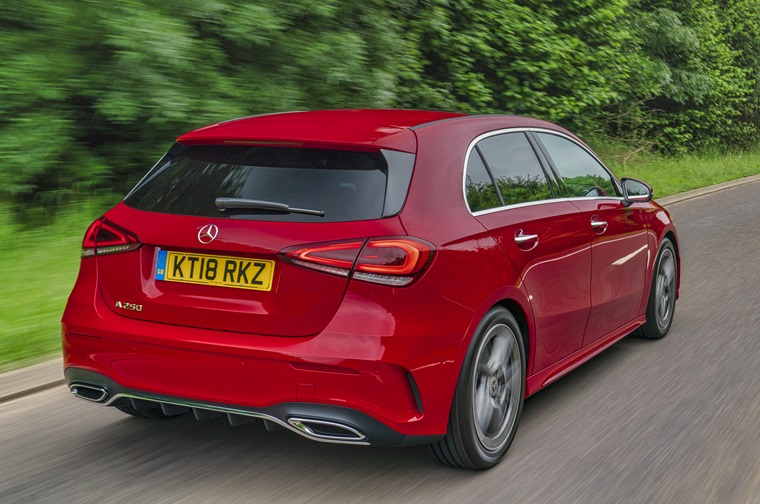 Prices kick off at £25,800 for the A180d, rising through the A200’s £27,500 and up to £30,240 for the A250. Those might seem a little steep compared to some rivals, but that does include around £1,600 for the automatic gearbox. Mercedes is predicting very strong residuals for the A-Class, which should make it just as appealing to lease customers as the previous model.

Should you choose the A-Class over its rivals? While it does seem like a car developed strictly by the numbers, they do stack up very well. Keen drivers will be drawn more to the BMW 1 Series, but the Mercedes is a more compelling all-round package.