The new Range Rover Evoque has been subtly yet comprehensively overhauled. Stylish, quiet, practical, refined and luxurious, it's another big win for JLR. 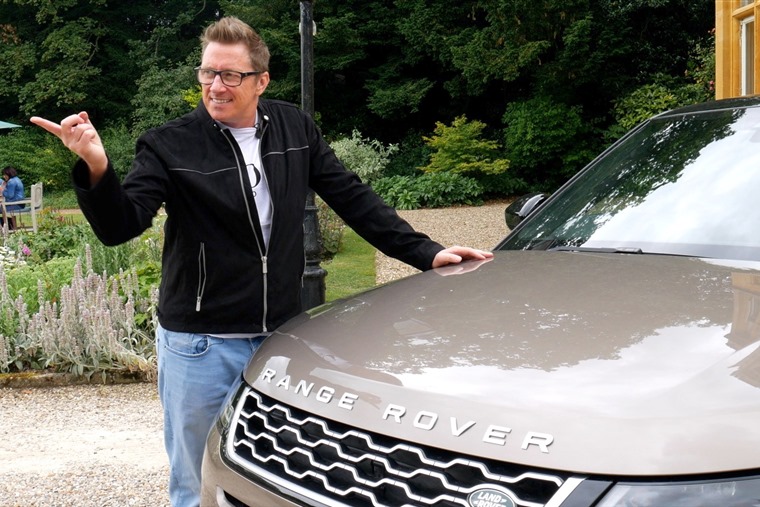 The Evoque got a lot of traditionalists worked up when it was launched back in 2011, but the fashionistas of the country couldn’t buy enough of the new compact SUV. The combination of that Victoria Beckham design (she didn’t design it, but the rumour refuses to go away), the promise of off-road ability, and that Range Rover name meant it flew off the showroom floor.

Replacing something that has seen the levels of success that Evoque has is tricky, which is why it initially appears that Land Rover has played things safe. Very safe.

However, despite appearing to be little more than a facelift, every single part of the car is new. Existing buyers didn’t want anything bigger than the outgoing model so the new one is almost identical in size, and they also didn’t want to mess with the style. 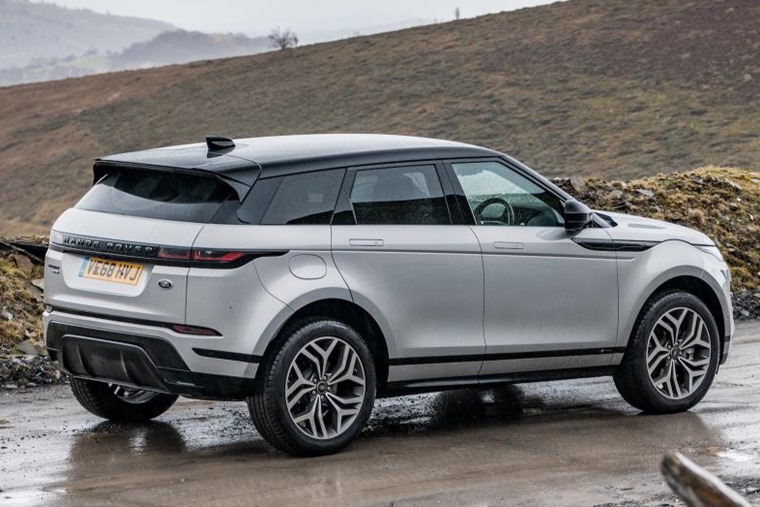 To that end, the Evoque carries on with the sharp, wedge shape of the old, smooths off the front end, adds Velar-like flush-fit door handles, and removes the black plastic cladding around the wheel arches. There’s far more to it in detail, but that’s what you’ll notice straight away.

You won’t be following a Defender down every green lane, but it’ll take some effort to get the Evoque stuck

New from the ground up, despite the similarities, the Evoque now rides on the new Premium Transverse Architecture platform that’s ready for a plug-in hybrid power plant. That’s some way off yet, so for now there’s a mild 48-volt hybrid system alongside the 2.0-litre turbocharged ‘Ingenium’ diesel engine of this test vehicle. This uses the starter motor that’s been integrated into the engine, attaching it to a 0.2kWh battery pack, which allows the engine to be switched off when coasting. It can also add extra power at low revs, filling in blanks while the turbo spools up. 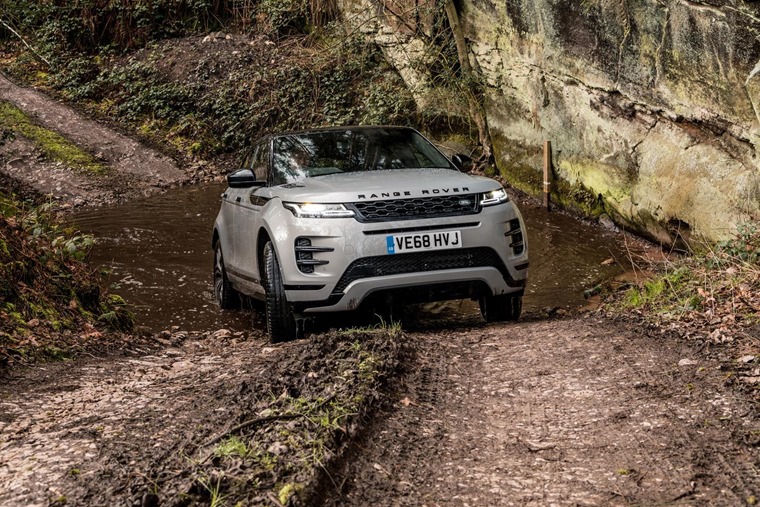 The new model is as quiet, refined and luxurious as anything else in the Range Rover range - and that includes models costing well into six figures.

The claim from Land Rover is that it improves efficiency by around 6%, which makes the official economy figure of 40.4mpg sound a little thirsty. However, during our testing, the road-based economy hovered at around 40mpg suggesting the figures are pleasingly grounded in some sort of reality. Economy dropped significantly when off-road, as you might expect.

Yes, off-road. The old model could get itself across muddy terrain without too much difficulty, but it was never at home on the really rough stuff. The new model improves on this and is seriously capable, thanks to a clutch-based torque vectoring four-wheel-drive system backed up by computers which adjust drive systems, hill descent control, and an impressive hill-hold system. There’s even the off-road equivalent of cruise control, allowing you to creep along and concentrate on squeezing between trees, climbing over rocks, or avoiding steep drops. You won’t be following a Defender down every green lane, but it’ll take some effort to get the Evoque stuck. 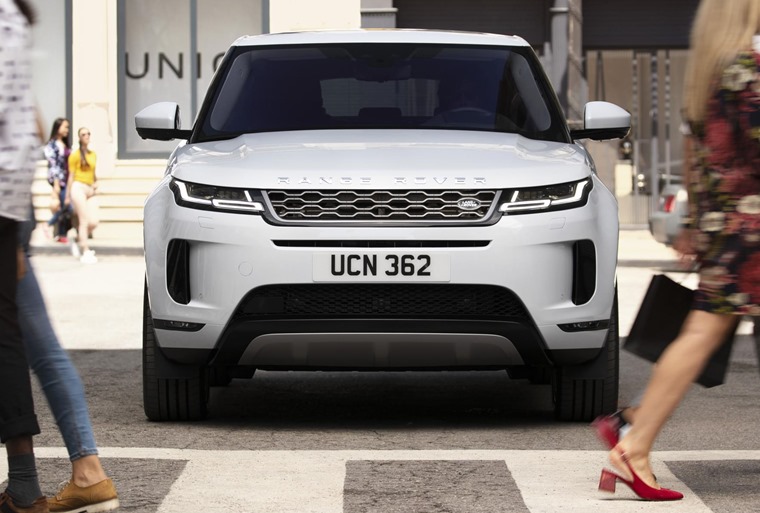 Of course, few owners will actually venture away from tarmac, so on-road behaviour is ultimately more important. Performance is certainly up to scratch, with an impressive 500Nm of torque able to pull the car along to 62mph in just 7.7 seconds, and 240hp to keep it going all the way to 140mph. The standard nine-speed automatic gearbox shifts smoothly, and generally keeps up with demands.

The Evoque’s strong residuals means that leasing prices, like the Range Rover Velar, are surprisingly low.

It follows the straight and narrow with aplomb, but when it arrives at a corner it, well, is actually quite good. Wide tyres grip hard, but the fully independent front suspension and the Velar-inspired ‘Integral Link’ rear set-up makes sure the car remains firmly connected to tarmac. It does this without sacrificing comfort, which is a trick few SUVs manage. The sheer weight of the Evoque eventually sends it drifting wide, as two-tonnes of metal fights physics - that’s more than the old model weighed, and almost 200kg more than an Audi Q3.

Despite the use of lightweight materials, there’s a lot of bulk in the Evoque. Much of that could well be soundproofing as the new model is as quiet, refined and luxurious as anything else in the Range Rover range - and that includes models costing well into six figures.

That premium sensation continues with a dashboard that manages to be both traditional and cutting edge. A couple of smartphone-like pitch-black glass panels dominate the centre stack, producing vibrant, high-contrast graphics that look fantastic. The digital instrument binnacle looks impressive, with fully configurable displays, and there’s also a digital rear-view mirror that shows the video feed from a roof mounted camera, allowing for a clear view through the letterbox rear window even when there’s passengers and luggage in the way.

The New #RangeRover #Evoque - designed to meet your needs from city streets to mountain tops with an eco-chic design and effortless technology. #HelloEvoque #LiveForTheCity pic.twitter.com/z5lOR8FPUF

The Evoque is more practical, more capable and every bit as stylish as before, it’s difficult to make much of a case against the car.

That’s all very lovely, but they’re all options. Every model gets climate control, heated seats and a 10in infotainment system, but the list of options extends endlessly, and includes equipment you’d possibly expect to be fitted as standard. Headlight washers, fog lights and auto high beam for example will add more than £500, while blind spot monitoring, a surround view camera, adaptive cruise control, automatic emergency braking and rear cross traffic alert adds a further £2,500. Even keyless entry comes at a cost. Still, the cabin is well finished and spacious enough, even in the rear. The boot is more accommodating than previously too, able to take 472 litres of wellies and Fortnum & Mason hampers.

Being a little stingy with equipment means prices haven’t moved much from the previous generation, however the Evoque’s strong residuals means that leasing prices, like the Range Rover Velar, are surprisingly low.

Given that the cost of usership therefore needn’t be alarmingly high, and that the Evoque is more practical, more capable and every bit as stylish as before, it’s difficult to make much of a case against the car. It’s everything you wanted the original Evoque to be. 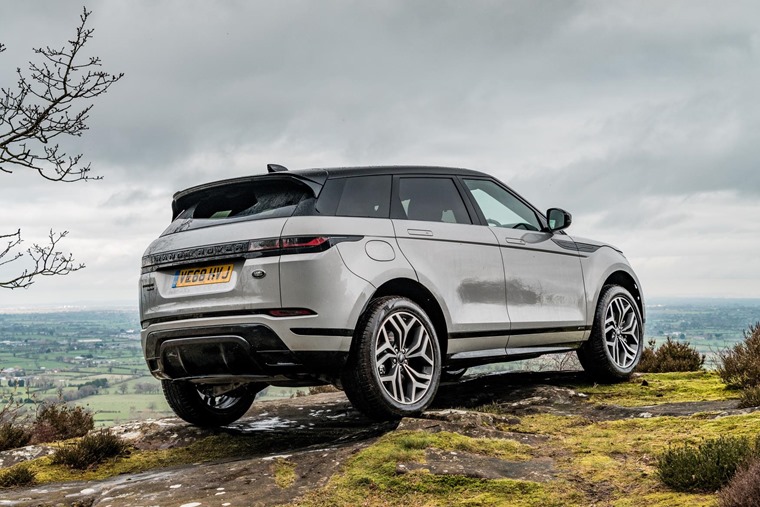