Plenty of grip. Plenty of power. Plenty practical. The Focus ST is still the best hot hatch you can get.

There are two ways to judge the latest Ford Focus ST. The first is to look at the on-paper facts and figures that show it’s not the fastest or most powerful car in its class. Not even close, when a Honda Civic Type R easily outguns it for outright bhp.

This is all despite Ford equipping the new ST with a larger engine than before, upping it from a turbocharged 2.0-litre to a 2.3-litre turbo petrol in the model that most people will want. You can also opt for a 2.0-litre turbodiesel with 187bhp that covers 0-62mph in 7.6 seconds and tops out at 136mph. However, we’re talking hot hatches here and a merely brisk diesel doesn’t cut the condiment.

So, back to that 2.3-litre petrol motor that produces ‘just’ 276bhp. That might have raised eyebrows 20 or even 10 years ago, but it’s just about the entry point to contenders for overall hot hatch honours. Using its power to drive the front wheels only, the Focus doesn’t have the same traction advantage as its RS predecessor. However, it does cover the 0-62mph dash in the same 5.7 seconds as its key Japanese rival and this is only the beginning of the Ford’s ascent to greatness.

Where the Civic feels like a car that’s been perfected on a race track to be quick on the road, the Focus ST is clearly a car honed by those who know it will spend most of its time on badly patched A-roads. This isn’t to say the Ford is soft or too wide in its brief, what it ably demonstrates is you don’t have to forego all semblance of comfort or suppleness to have a car that rides and handles supremely well.

It's clearly a car honed by those who know it will spend most of its time on badly patched A-roads.

Point the Focus ST down a lumpy back road and, where many others in this sector would quickly begin to buck and baulk, the Ford is slap, bang in its element. Revised steering and front suspension geometry from the standard car’s endow the ST with the sort of grip and control rarely afforded front-wheel drive cars and it means you can use every last ounce of its 276bhp to propel the Focus forward. There’s also Continuously Controlled Damping to keep the car on an even keel at all times. None of this feel hooligan in the way it can in the Civic or as if the driver is hanging on for dear. 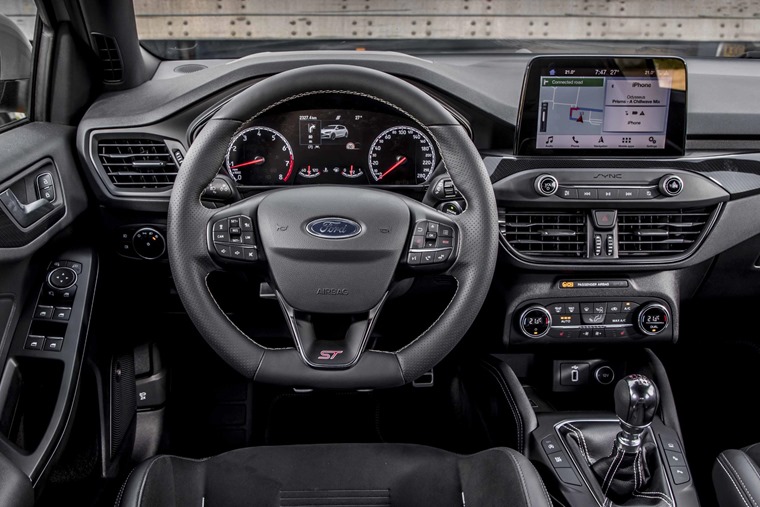 Nor does the Ford sanitise the experience in the same way the likes of the Audi S3 or Mercedes-AMG A35 can. Instead, the ST pulls off the perfect balance of entertaining its driver at the sort of speeds ad acceleration the human brain can deal with. You don’t need to be fighter pilot quick to get the best from it, but there are more than enough reserves here to keep you coming back for more and finding little gems of ability when you do.

Head down that favourite stretch of tarmac and the ST puts you in sporting mood.

During our time with the ST, we quickly grew to love the ease with which it could head down the motorway, return close on its official 35.7mpg combined economy without any effort and mooch through town. Even with the obligatory ST body kit and large rear spoiler, it doesn’t shout too loudly of its roots, so this is a hot hatch that can match the Volkswagen Golf GTI for subtlety.

However, head down that favourite stretch of tarmac and the ST puts you in sporting mood. The six-speed manual gearbox has a tick-tock accurate shift ad matches revs on the way down the ’box should you want it to smooth out the changes. That sharper steering lets you turn into bends with confidence and allows more than enough feel to filter back to the driver’s hands for minute corrections when needed. 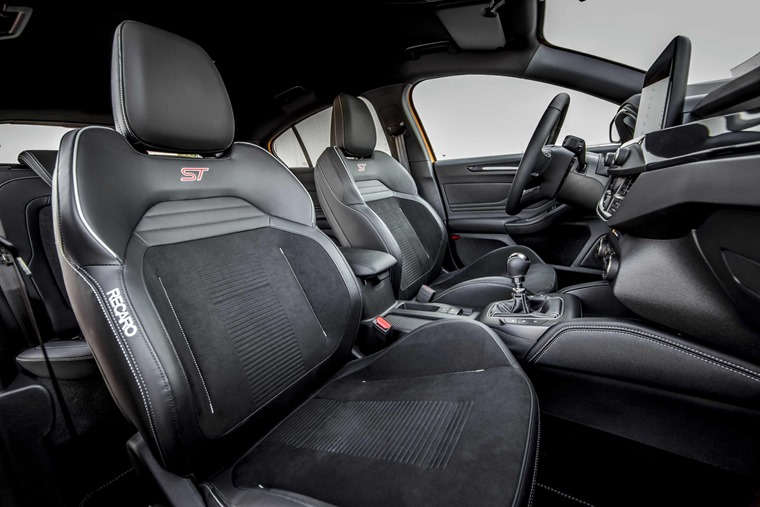 Plenty of grip is a given in the ST, but what’s also impressive is the way Ford has tamed the waywardness of the previous model when the driver applied the throttle. Where the old ST could run wide, snatch a wheel or tug the steering in the driver’s hands, this one just pulls the car forward with greater force thanks to an electronic limited slip differential that meters and divides the power to the front wheels as appropriate.

The ST is a better hot hatch than anything else in its bracket right now.

This is the key to why the ST is a better hot hatch than anything else in its bracket right now. Some are quicker or more powerful, but the Ford lets you access and use all of its talents whenever you want without making you feel overwhelmed or short-changed.

As for the rest of the ST, you can choose it in five-door hatch or estate forms, with the wagon 0.1 seconds slower from rest to 62mph, though both versions share the same 155mph top speed.

While all of this kit is great to have, the real reason to choose the Focus ST is its supreme dynamic ability. If you enjoy driving, you’ll love the Focus ST.

Numerous revisions give the Focus ST a sporty flavour... there’s a new grille, a roof-mounted spoiler and the obligatory dual exhaust pipes.

Not the quickest or most potent hot hatch, but electronic limited slip diff lets you have fun without worry. Even more impressive is the ride is equal to the handling.

It’s a Focus: 375 litres of boot space is bigger than the Astra’s and a huge leap over the old ST.

Petrol manages 36mpg combined, while the diesel ekes out more than 60mpg.