It’s well-equipped, comfortable, looks great and makes for a decent family car. It’s also got a huge load bay, can tow 3.5 tonnes, and get pretty much anywhere. 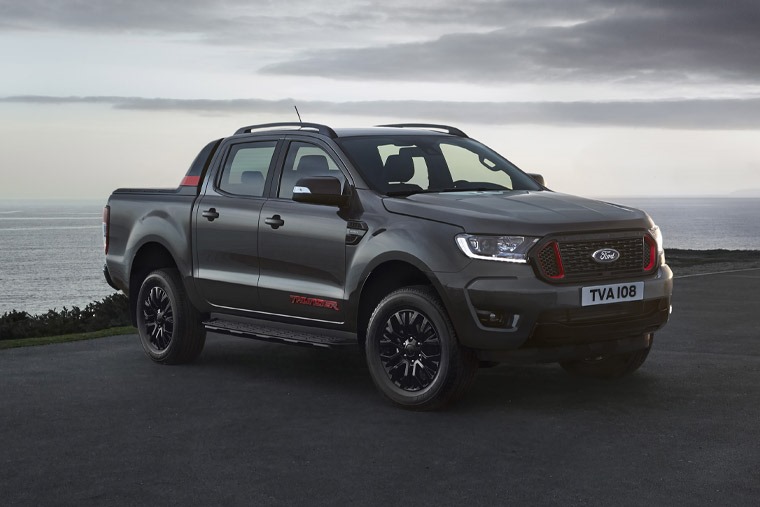 You wouldn’t believe that the current Ford Ranger is getting on for ten years old, but a series of facelifts has kept it looking (fairly) fresh against its rugged rivals.

The latest update isn’t so much a facelift, but simply a new trim level with some cosmetic accoutrements to make the Ranger appeal to drivers who are less likely to venture off-road.

The Thunder name has graced the Ranger on every previous generation of the truck, going right back to 2003, and has always been a popular choice amongst commercial and lifestyle users. This time, perhaps, the commercial users might look elsewhere as the Thunder has definitely shifted its focus.

It’s based on the Wildtrak version of the pickup, which is a pretty bold truck, but adds a large sports bar, Thunder logos all over the place, and red highlights dotted around the vehicle - including those red ‘nostrils’ on the grille - set against dour Sea Grey paint. 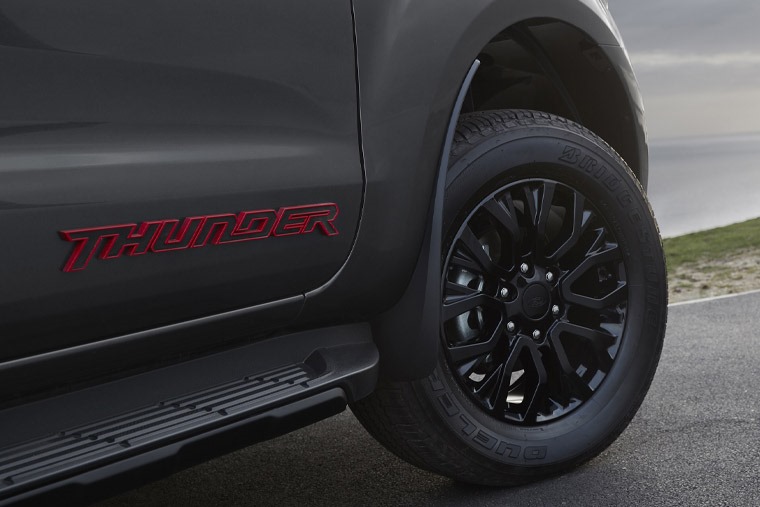 Add some 18in gloss-black alloy wheels, gloss black bumpers, skid plates, grille and surround, and door handles, along with darkened bezels for the LED headlights, and it somehow looks both menacing and appealing at the same time.

Those looking in their rearview mirror may disagree with the latter, as the Ranger is huge. It’s able to wade through 800mm of water, so rides very high, and the upright grille and clamshell bonnet accentuate its bulk. It’s also the longest regular pickup on sale, at almost 5.4 metres long, so you’re not going to disappear into the background. This, whilst not quite as bold as a Ranger Raptor, is not a vehicle for shrinking violets. 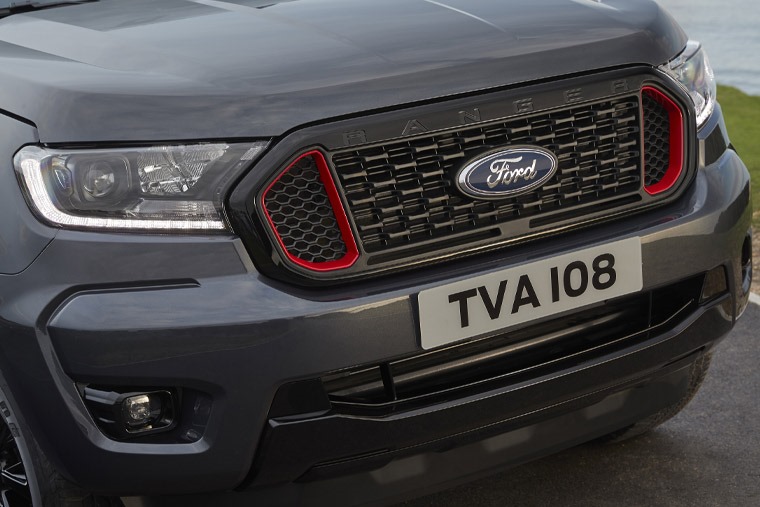 There’s just one engine option for the Ranger Thunder, and that’s the 2.0-litre, 213hp diesel unit. There’s 500Nm of torque on tap, so it sprints from zero to 62mph in just 9.0 seconds - that’s quicker than the ‘sporty’ Raptor! The 10-speed automatic gearbox generally knows what to do, and shifts gears smoothly, but the sheer number of ratios means it’s occasionally left hunting for a gear.

The 2.0-litre engine here is amongst the best in class.

No pickup is particularly refined, but the 2.0-litre engine here is amongst the best in class, being quiet enough at motorway speeds to be able to comfortably hold a conversation across any of the five seats.

There’s plenty of space for all in there, especially in the front seats, which are wide, comfortable and reasonably supportive. They’re also covered in leather, electrically adjustable, heated and have more bold Thunder logos stitched into them. 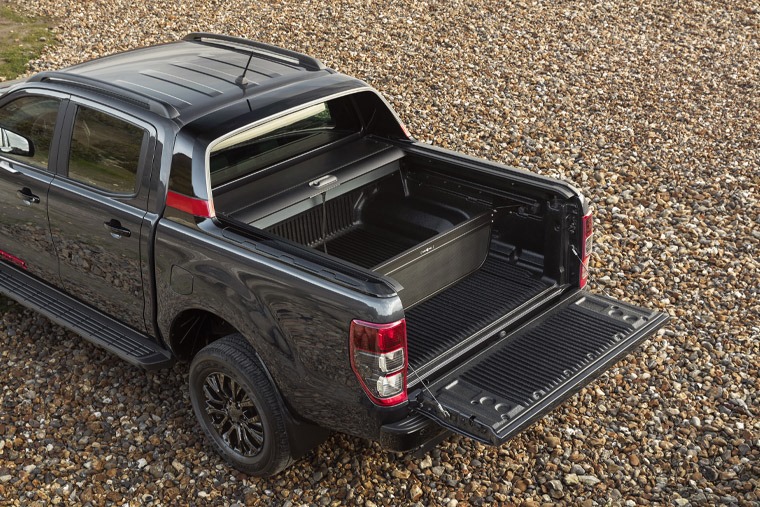 The cabin itself is surprisingly car-like, but only if you consider a car from about 2013. Granted, there’s an impressive infotainment system accessible through an 8.0-inch touchscreen, complete with Android Auto and Apple CarPlay for smartphone mirroring, but the sheer quantity of tiny buttons set low down in the dashboard to control the heating and ventilation is a complex mess.

Switching the Ranger from rear-wheel drive to having all four wheels powered takes seconds.

At the other extreme, the selector for two-wheel, four-wheel or low-range drive is as simple as it gets; a single rotary knob selects the mode you want. Switching the Ranger from rear-wheel drive to having all four wheels powered takes seconds, and leaves it able to tackle most terrain. There’s good ground clearance (237mm) and decent approach and departure angles, and 500Nm of torque to pull you out of any sticky stuff. That ability is boosted by an electronic locking rear differential, providing increased traction when selected, as well as hill start assist and hill descent control.

But the Thunder is probably going to spend most of its time on the road. Like every truck, it can get uncomfortable over uneven surfaces as the rear, as the suspension bounces from bump to bump, but the Ranger is one of the softer trucks on the market and rides better than most. It also handles better than most, with an almost eager front end that grips tenaciously. You’ll miss your SUV though, if you’re coming from one of those.

You’ll miss the fuel economy, too. The Ranger Thunder returned 28.6mpg during my time with the pickup truck, against an official economy figure of 36.7mpg. The reality is that it’s not too bad a figure, with few trucks getting far north of 30mpg, but those covering high mileages might still want to look elsewhere. 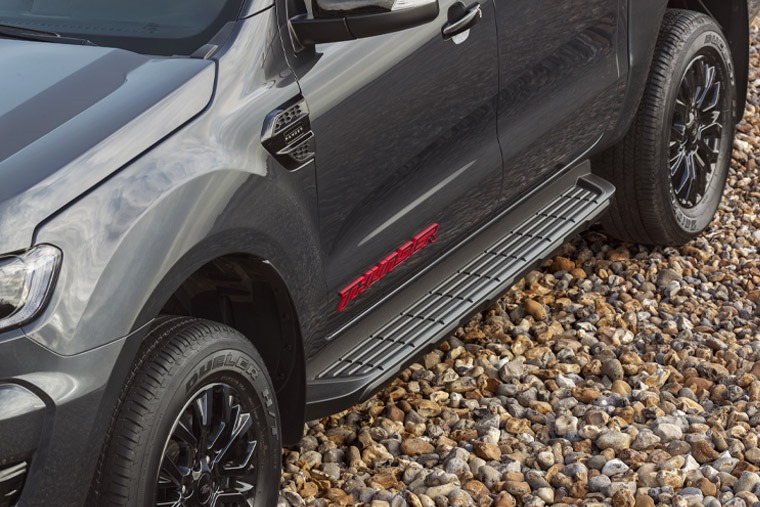 But there are other considerations, especially for business users. As a commercial vehicle, with a payload capacity of more than a tonne, you’ll be able to claim the VAT back on your lease payments, while company car tax is set at a low fixed rate that’s unrelated to CO2 emissions.

The Ranger is one of the softer trucks on the market and rides better than most.

Even without those financial benefits, the Ranger Thunder is a strong choice. It’s well-equipped, comfortable, looks great and makes for a decent family car. It’s also got a huge load bay, can tow 3.5 tonnes, and get pretty much anywhere.

As a vehicle to bridge that gap between outright lifestyle use and tough professional use, it could be just about perfect.