Mercedes A-Class Saloon vs CLA-Class: Which one’s for you?

Mercedes’ ability to successfully identify a niche is something we’ve touched on before. In fact that three-pointed star attracts more lease customers than any other badge. But when it comes to the A-Class Saloon and the CLA-Class Coupe, has the brand managed to out-niche itself?

The thing is, to the untrained eye they are one and the same. Both are likely to be a success for Mercedes, and we’re positive the pair will prove a hit with lease customers. So, we’ve created a helpful go-to guide to point out some of the key differences.

It’s time for a game of spot the difference…

Let’s start with the obvious… They’re a similar-looking pair, aren’t they? When the A-Class Saloon was revealed last year, Mercedes announced it was primarily aimed at the Chinese market. However, it has since made its way to Europe. This lead many into the natural conclusion that the sleek four-door CLA Coupe – which up until now has essentially operated an A-Class Saloon – would be discontinued from the line-up.

But no. Instead, Mercedes revealed an all-new CLA which, externally at least, is a very close relative to the aforementioned A-Class Saloon.  The CLA is the larger of the two as you’d expect, but not by much: the A-Class Saloon is 4,550mm long while the CLA is 4,688mm. 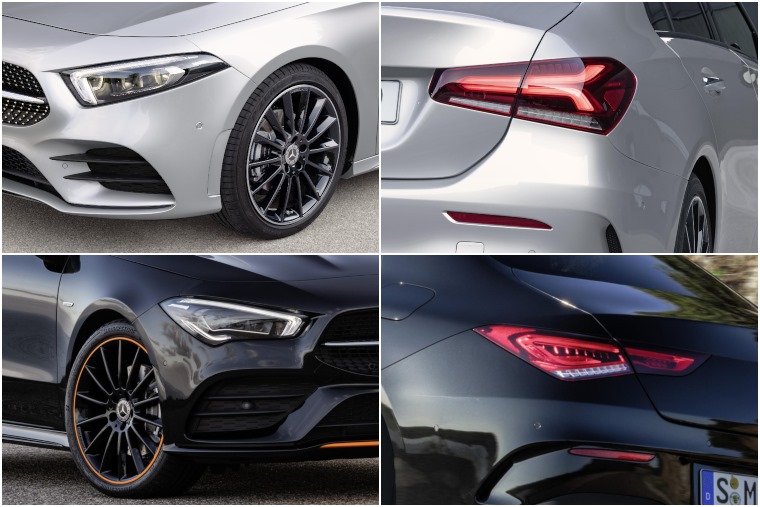 Up front, the A-Class Saloon borrows the face from its hatchback sibling. The CLA? Well the grille, air intakes and frontal proportions mimic the A-Class Saloon pretty much like for like, but the eagle-eyed will notice a larger set of headlights, and most significantly, a clam-shell effect bonnet to give it a more sporting look.

The changes get slightly more noticeable down the side. The CLA lies 6mm lower than the A-Class Saloon – just enough to incorporate a slightly swoopier roofline to ensure it lives up to its four-door coupe brief. It misses out on the creases that run down the A-Class Saloon’s sides though. Picking the CLA will also see you benefit from sleeker, pillarless doors – something the A-Class can’t boast.

The most sizeable change is round the rear, where the CLA benefits from a extenuated boot line that incorporates a longer boot. Rather than a flat rear end, it slopes into a tail much like the larger CLS does. The taillights differ by design too, as do the bumpers. At first glance there’s not much in it, but Mercedes has clearly tweaked the CLA enough to give it that extra special feel. Is that enough to sway you?

Well if you thought they looked nigh on identical externally, you’ll have an even harder time telling them apart from the driver’s seat – even we struggled. For reference, the A-Class is in the upper portion of the images, CLA the lower. See what we mean? 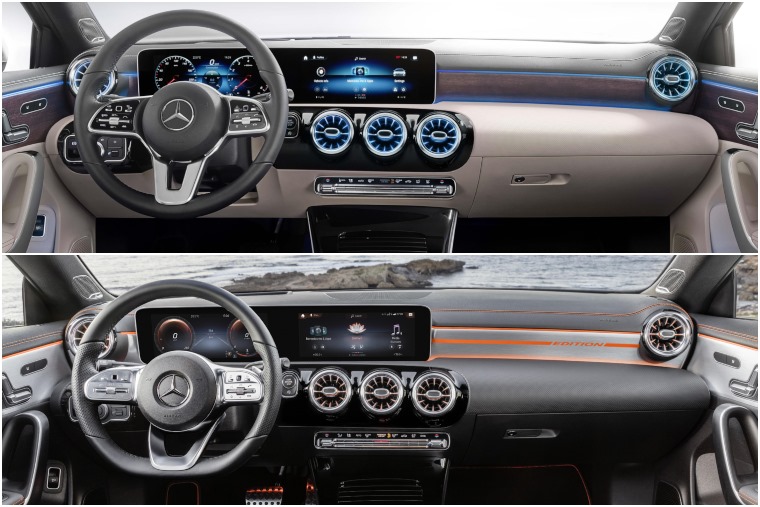 From the MBUX infotainment system, air vents, LED ambient lighting placement to the boot release button – there’s very little in it. Overall, the A-Class Saloon is ever-so slightly subtler, but that’s almost entirely down to the choice of trim colours on the pictured models.

Both benefit from Mercedes’ MBUX set-up. The only difference is that the A-Class Saloon gets two 7in monitors as standard, while the right-hand screen in the CLA measures 10.25in as standard. If you want it in the A-Class Saloon, you’ll have to plump for the Executive Equipment Line pack. It’s a worthwhile upgrade in the smaller car if you connect your smartphone to your car regularly. 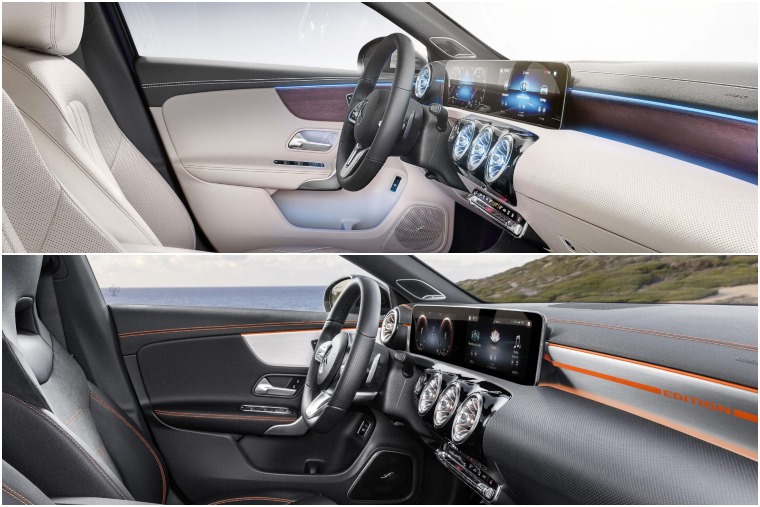 Where there is a difference, however, is space. That extra bit of length sees the CLA edging ahead on the practicality front. With 460 litres of space in that curvaceous boot, it outdoes the A-Class Saloon by 50 litres. There’s also a little more room for rear passengers, although in both cars the low-lying roof impedes head room if you regularly ferry about tall passengers in the back. The CLA also has a much wider boot opening, making it marginally more practical. 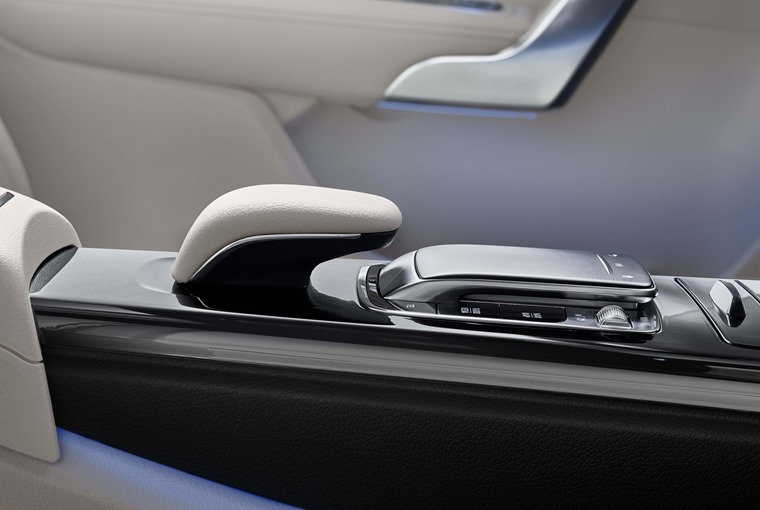 The A-Class range includes just two trims: Sport and AMG Line. Sport models feature faux-leather seats and dual-zone climate control, while AMG Line ups the alloy wheels from 17in to 18in along with a sports body kit. As highlighted earlier, Mercedes are big fans of offering additional packs and these include the Executive Equipment pack and the Premium equipment line pack. The latter adds keyless entry and illuminated door sills.

While the trim and layout is nigh on identical, standard equipment levels are slightly higher as standard in the CLA. That’s primarily because it is only available in AMG Line guise in the UK – hence the larger infotainment screen. You can increase the 7in driver display to another 10.25in unit if you plump for the range-topping AMG Line Premium Plus, though. This also gets you Adaptive Highbeam Assist, memory seats and even an energising pack – something that uses the car’s infotainment and cabin space to boost driver fitness and wellbeing. 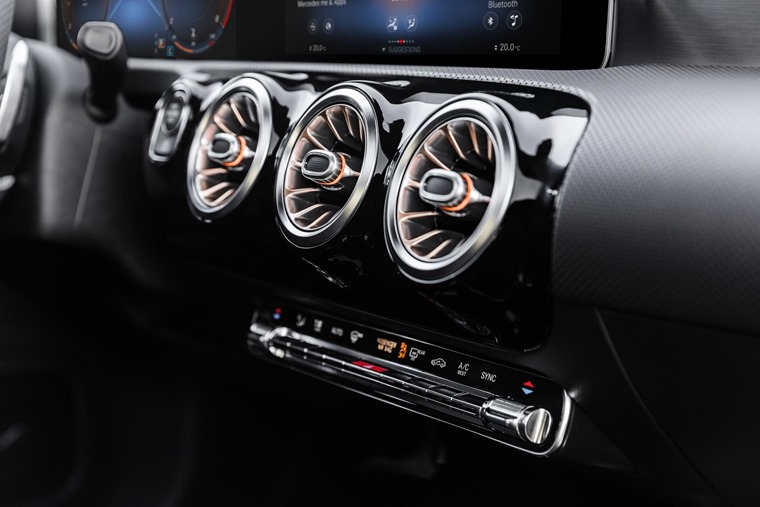 Four drivetrain options are currently available for the A-Class Saloon. A sole diesel – the A180 d – kicks the range off and offers 116hp. The petrol A200 gets 163hp and is the only engine available with a manual gearbox; all the others get a seven-speed auto as standard. 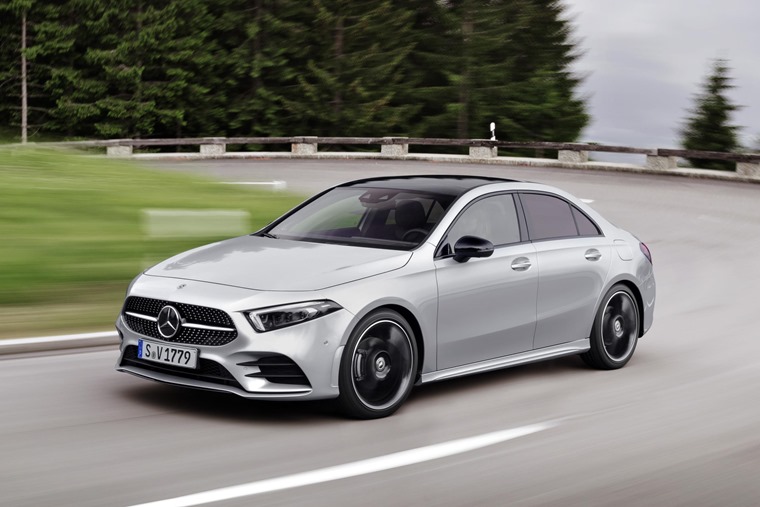 The A220 4MATIC boosts power to 190hp and adds Mercedes’ 4MATIC all-wheel drive, while the range-topping A250 produces 224hp – enough to get the Saloon from rest to 62mph in 6.3 seconds. Suffice to say, there’s a wide enough choice for most people, although there’s no word on whether we’ll be seeing a booted version of the performance A35 hatch anytime soon.

The CLA’s engine line-up mirrors the A-Class’ to a large extent, although a more potent CLA 220 d diesel producing 187bhp and 400Nm of torque will be available shortly after launch. This model will also get a slightly slicker eight-speed automatic gearbox. Interestingly, the entry-level CLA 180 is available as a less potent 136hp unit in addition to the 163hp variant used in the A-Class. 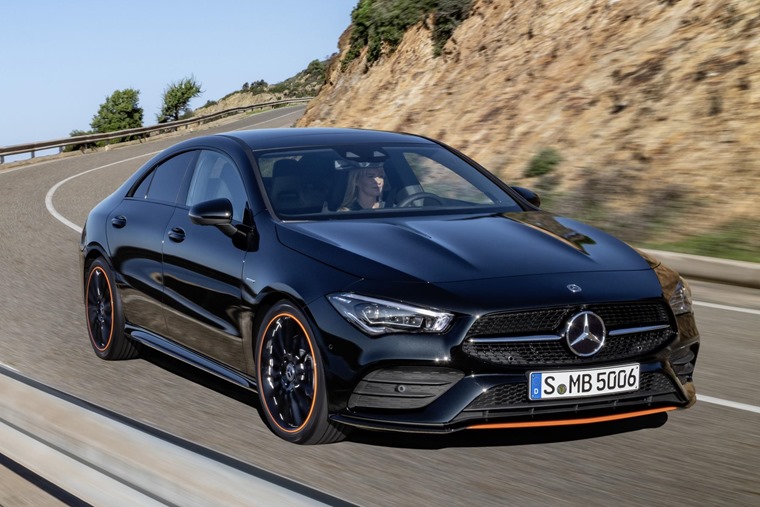 The CLA 220 gets 190hp and is again available with 4MATIC all-wheel drive. At the top of the range is the CLA 250 that produces 224hp and 350Nm. Like the A-Class hatch, the CLA has been given the AMG treatment, with an AMG 35 4MATIC set to top the range. The 2.0-litre turbo produces 306hp – just as it does in the hatch. This is another hint that Mercedes will be leaving the A-Class Saloon alone when it comes to more potent models.

Which one should you choose?

Rates and availability will play a part in your decision, of course. Considering list prices for the A-Class Saloon and CLA start from £25,840 and £29,655 respectively, there’s a noticeable difference in the monthly repayments. Rates for the A-Class Saloon currently hover around the £225 per month mark, while around £275 per month is a more reasonable budget if you plump for the CLA.

Based on that, which one would we pick? If you’re after a stylish, small and truly premium saloon, you can’t go far wrong with the A-Class. However, to justify its existence, the CLA has had to up its game, and upped that game it has. 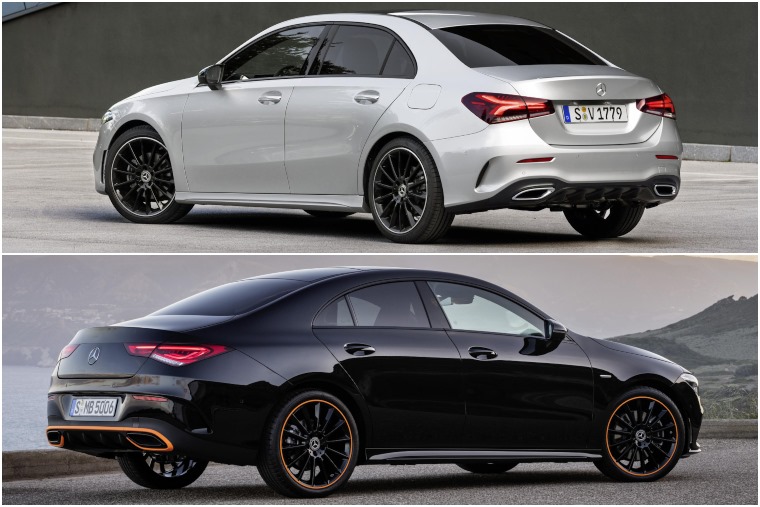 It might look very similar to the smaller car, but let’s be honest: lots of people probably mistake a C-Class for an E-Class. That tapered rear end still helps it stand out too, and standard equipment is slightly more impressive.

What would we do? All things considered, we’d probably pick the slightly smaller A-Class lease. Its lower monthly costs Its lower monthly costs are the main persuader. Plus you’ll be able to choose a higher specification than a CLA for around the same price. At the same time, style isn’t sacrificed. At the end of the day, however, this enviable choice is yours.