Aiming to take on and beat Tesla at its own game, lease deals on the Porsche Taycan are now available. Priced from £873 per month, here’s everything you need to know about this new all-electric sports car. 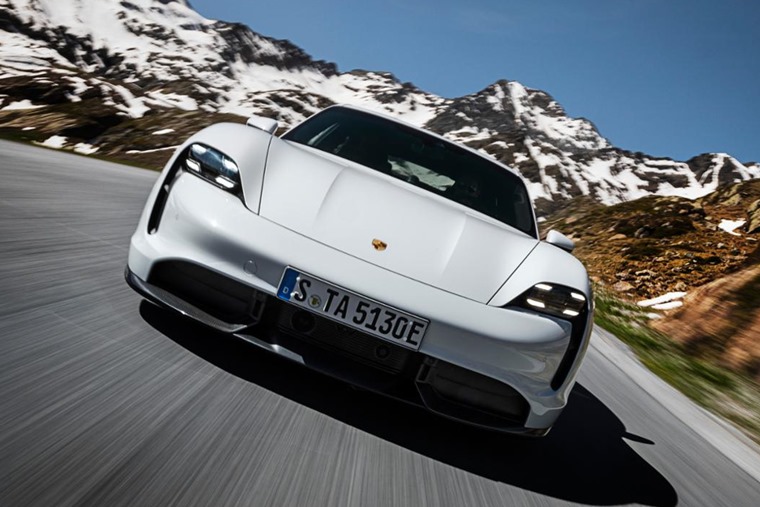 We’ve known Porsche has been developing an all-electric car for a while now, with concept cars such as the Mission E and Cross Turismo giving us a glimpse of what the Tesla Model S rival will look like.

Having initially been revealed at the Frankfurt Motor Show in 2019, up close and personal it actually resembles those original concepts quite significantly. It’s obviously been designed to stand out from the rest of the range, with it being the brand’s first EV. 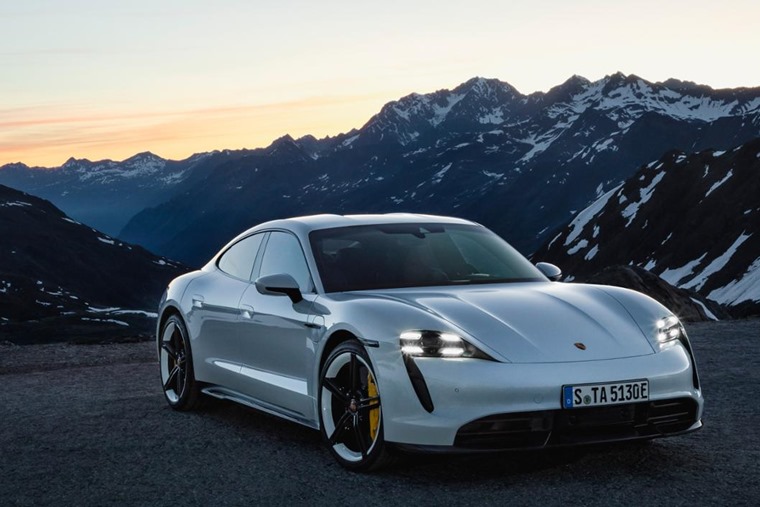 However, there are notable Porsche design cues. The rear windows resemble the iconic lines of the 911, as does the sloping roof. The wraparound tail lights and four-point LED headlights are reminiscent of the rest of Porsche’s line-up too.

At 4,963mm long, it’s not a small car by any means, while 21in wheels are standard. We know three trims will be available, with the Taycan Turbo and Turbo S being the models available from launch. They’ll cost from £115,858 and £138,826 respectively.

Inside is a tech-fest. There’s four screens, with Porsche introducing a new 16.8in driver display. To its side there’s a central 10.9in infotainment screen, while there’s the possibility to add a further screen as an option for the passenger that can be controlled independently. 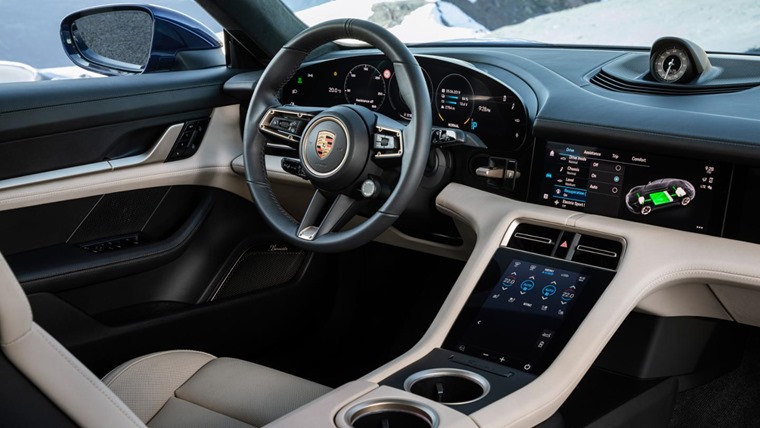 Below, a portrait 8.4in touchscreen makes up the centre console, and also gets haptic feedback which will make it easier to use whilst driving. Porsche has confirmed the infotainment system will feature a standalone Apple Music app, with new customers set to get a free six-month access pass.

That means you won’t even need to pair it to a phone to access music. Three years of in-car internet will also be offered with the Taycan. This is the first-ever full integration of Apple Music in any vehicle. 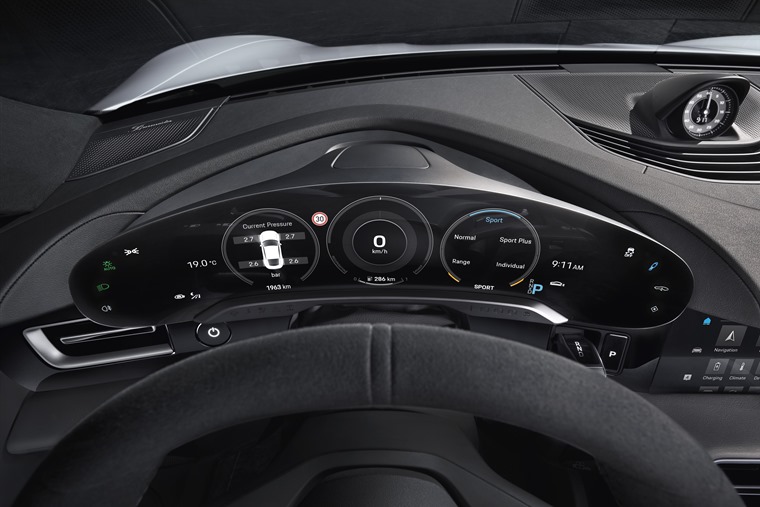 Like Tesla, Porsche will offer ‘over-the-air’ tech updates for the Taycan, meaning you’ll be able to update the infotainment, navigation and safety tech without visiting a dealer.

Sitting on an all-new electric platform, the Taycan gets two electric motors and a 93.4kWh battery pack. Running on 800 volts – currently unusual for an EV – the most potent Turbo S model produces 750hp and more than 1,000 Nm of torque. This allows for a 0-62mph time of 2.8 seconds and a top speed of 161mph. Full specs are to be confirmed, but the lesser Turbo model will produce 617hp. 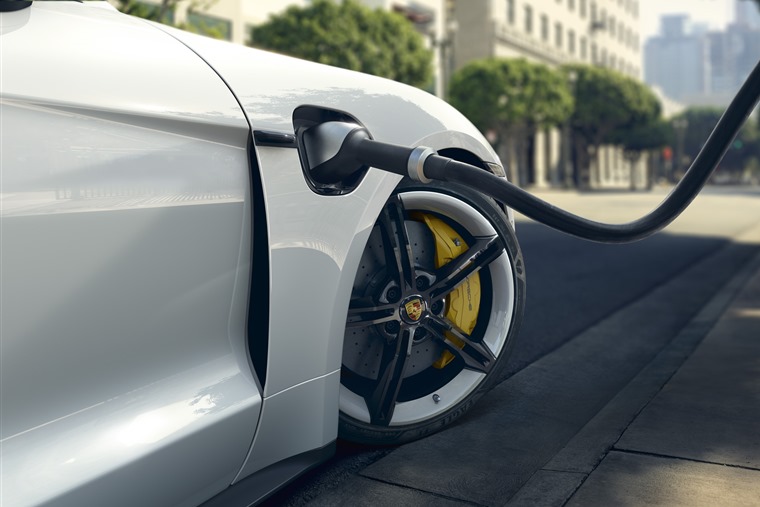 According to WLTP figures, the Turbo can cover 279 miles between charges, while the more potent Turbo S can manage 257 miles on the same charge.

The lithium-ion battery pack has been developed to ensure hard acceleration won’t negate range. It will also be able to gain around 60 miles of charge in just four minutes – via a 350kW CCS charger that is. 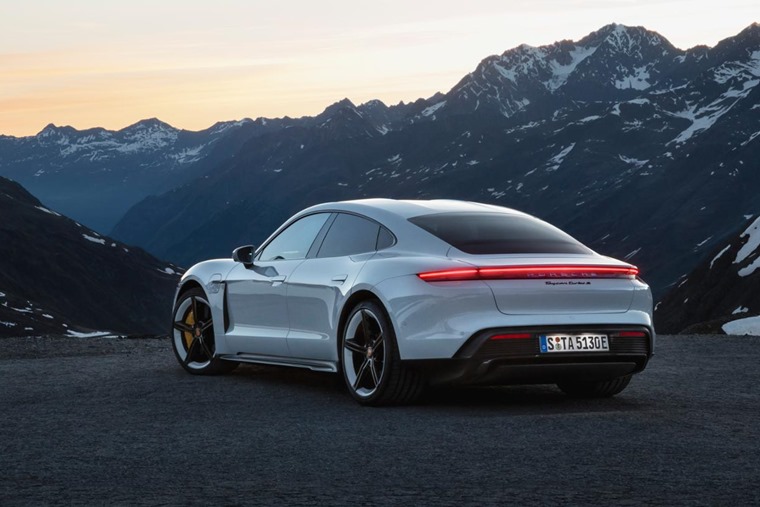 On top of its ground-breaking electric platform, other standard features include four-wheel steering and a special active air suspension system. Five drive modes feature: Range, Normal, Sport, Sport Plus and Individual.  There’s also an energy recuperation system that can be operated via a switch on the steering wheel.

It’s certainly a milestone for the German brand, with the Taycan being its first fully electric vehicle. We’ll bring you exact specification and trim details as they are released.