It’s cute, it attracts more attention than anything else I’ve driven over the last year, and there’s an undeniable charm to zipping around a city in what’s not much more than a skateboard with a roof.

Citroen insists that the Ami isn’t a car. In a sense, they’re right. It’s legally a quadricycle, and that definition brings with it many advantages for those wanting to build a super-compact eco city car.

Over in Europe, there are countries where somebody as young as 14 can drive one, while adults can get behind the wheel even if they’ve been banned from driving proper cars for having a few too many bottles of Beaujolais.

We’re rather stricter with our laws and the Ami is treated much the same way as a car - you need to have a driving licence. Of sorts. You’ll need a full driving licence to get behind the wheel, but a 16-year-old could take a CBT test and drive under the same licence they could use a moped on. 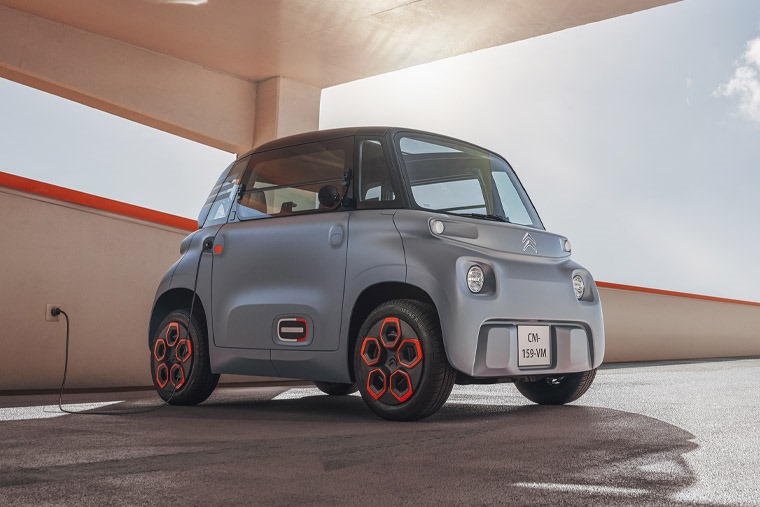 The fact you can drive it on a moped licence also suggests there’s not a surfeit of power available. It’s a pure-electric vehicle with an electric motor that provides (checks notes) eight horsepower.

It’s all made of plastic, inside and out. Citroen has been clever with the Ami’s construction, with external panels that are symmetrical front to back and left to right, reducing production costs and keeping repair bills low. Even the doors are made from the same moulding, with the passenger door opening normally and the driver’s door-mounted the other way round and opening backwards.

The body panels are thick coloured plastic too, ensuring that any scratches don’t show up and keeping insurance bills right down. The bright orange plastics inside are a little sudden, with lego-like boxes under the windscreen offering storage for bits and pieces. Even the windows are designed to save money, manually folding upwards rather than needing anything as complicated as a winding mechanism.

Ignore the 0-62mph sprint time as the Ami will only reach 28mph thanks to the legal limits in place across Europe. Even without that limiter, it’s doubtful the Ami would go much quicker as, despite its enthusiasm off the line, it runs out of puff by the time you’re doing 20 or so. Even if you were brave enough to take to a major road, the electric range of 43 miles will soon put paid to your plans. 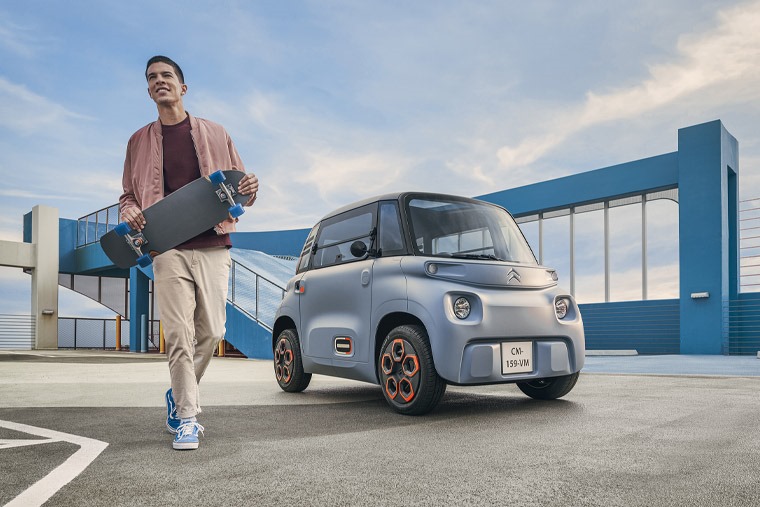 This is not a car for the motorway, then. Instead, stick to the city streets and you’ll find that the range is more than enough and that it’s plenty quick enough to keep up with (and beat) the congested traffic around you. There’s also a comically tight turning circle that leaves cabbies looking on longingly, which allows you to take some innovative route through the throng of cars and buses.

Stick to the city streets and you’ll find that the range is more than enough...

Frustratingly, it’s just a little too wide to filter between lanes, so you’ll often be stuck in the same traffic jam as everybody else.

That will give you some time to see what you’ve got in the Ami: There’s a heater, and, well, that’s it.

There’s also a compact but usable instrument panel in front of you, and a phone mount with a USB port to the right - plug your phone in here, balance in the cradle, and then use your smartphone to provide navigation and music. You can stream your music to a portable Bluetooth speaker, with a suitably sized Ami-branded model being available, of course. 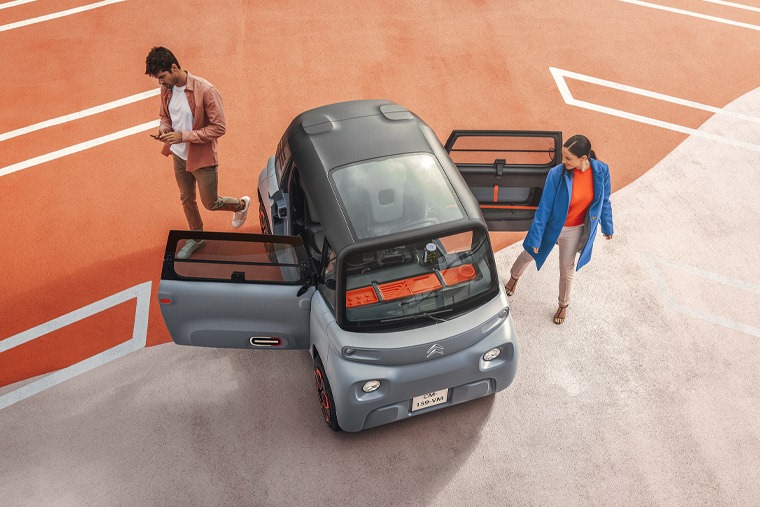 If you’ve got a couple of squashy bags, you can also wedge them in the gap behind the seats.

The cabin consists of two wipe-clean plastic seats with just a little padding, but they’re not particularly comfortable. In the future car-sharing world Citroen sees the Ami operating in, that makes some sense, but if you’re spending more than half an hour or so in the car, you’ll begin to think otherwise.

There’s no boot, but the passenger footwell has an area to take a bag, and there’s a hook to hang a bag from. If you’ve got a couple of squashy bags, you can also wedge them in the gap behind the seats.

Outright practicality isn’t an issue though, as you won’t be using the Ami to head to the airport for your family holiday (Oh, I remember the days of airports and holidays…) so the compact nature of the Ami works well enough.

It’s unusual to have to talk about a vehicle being watertight, and the Ami is, but it’s certainly not a sealed cabin. The cold, miserable day in London saw the cabin temperature drop, aided by a cold wind coming through a gap in the door. The heater helped, of course, but it’s got just one speed which sounds a little like an Airbus A320 at take off, and it pushed the hot air onto the windscreen rather than the driver and passenger. That means there’s no fan to cool you on a hot day and, with a panoramic sunroof and lots of glass, that could be uncomfortable.

Some have made a point about the safety of vehicles like the Ami. They don’t have to go through the same rigorous safety testing that a proper car does, which causes some concern. However, while the Ami clearly won’t sail through a Euro NCAP test, the fact that speeds are (very) low and you’ll be surrounded by equally low-speed vehicles, the chances of a significant impact are low. If my only other option would be to ride a moped, I think I’d rather be in the four-wheeled, enclosed, Ami. 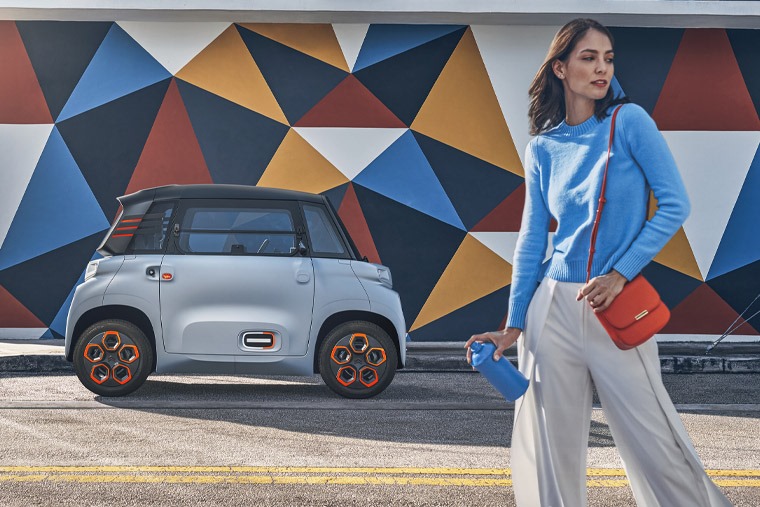 Should you buy or lease an Ami? Well, you can’t. At least not yet. Citroen has brought a handful to the UK to gauge reaction, but there is currently no plan to bring the car to this country.

If they did, it'd be incredibly cheap to acquire (you can lease one for around £20 a month in France, after subsidies and a deposit) and run - maintenance costs will be close to zero and the battery pack will cost just 85p or so to fully charge. There’ll be no car tax to pay, no congestion charges, and it’ll slip into tiny gaps in parking bays that could enable you to take advantage of cheap or free spaces.

There’ll be no car tax to pay, no congestion charges, and it’ll slip into tiny gaps in parking bays that could enable you to take advantage of cheap or free spaces.

Even then, it’s a niche model with a very specific customer in mind. If you live in an urban area where public transport is sub-optimal, or you’ve got nothing more than a few miles of driving into the office, then there’s a justification for the Ami. Any more than that and those justifications start to fall apart a little.

It’s cute, it attracts more attention than anything else I’ve driven over the last year, and there’s an undeniable charm to zipping around a city in what’s not much more than a skateboard with a roof. As the basis of a car-sharing service, there’s potential for the Ami but, for most, once the novelty wears off it’s arguably just too compromised.

Despite that, I still love it.