First impressions of the Mustang Mach-E are great. It looks good, is practical enough to please most, promises strong performance, and has a battery range that could get you more than 350 miles down the road.

Central London doesn’t initially feel like the right place to launch a car that has the Mustang name slapped on the back of it, but then this isn’t a normal Mustang. Gone is the long, sleek body, replaced by a fairly conventional crossover shape that is far more practical. Also gone is the soulful 5.0-litre V8 petrol engine, replaced by an electric motor and a large battery pack. 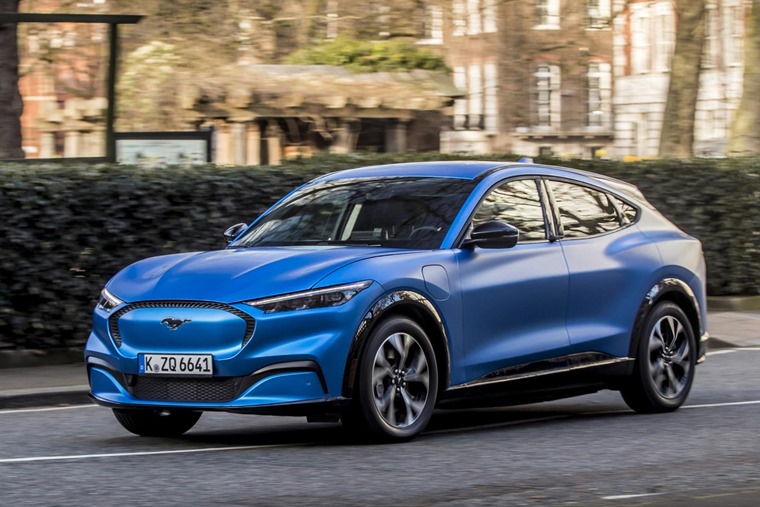 At 4.7 metres long, it’s still a big, America-friendly car, but some clever styling cues masks its bulk. The front end has a clear Mustang-inspired grille, although it’s actually just a solid plate as the electric motor doesn’t need the air that a petrol engine does.

The roofline appears to slope away steeply, but it’s an illusion - judicious use of some black paint hides the real roofline which is more horizontal than you might imagine. It then blends this into the rear spoiler, making the Mach-E look surprisingly svelte. 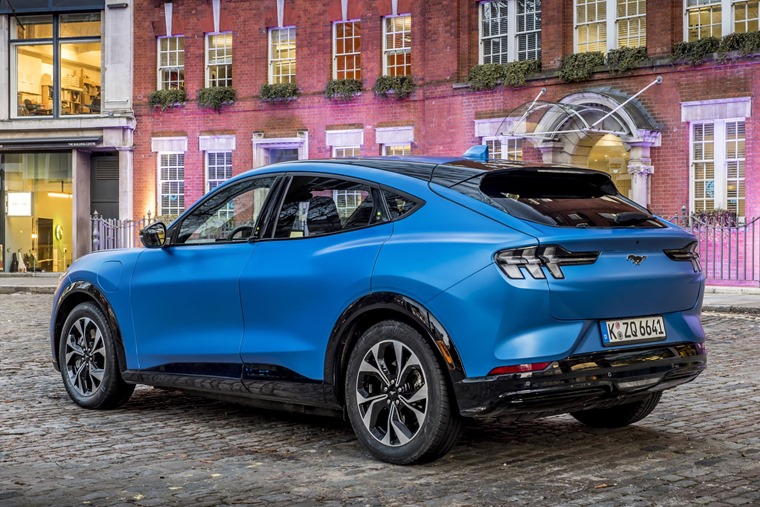 Having ‘Mustang’ in the name does rather raise expectations though. Had Ford followed on from Puma and Kuga with something like ‘Linx’ then nobody would bat an eyelid.

The rear is clearly following Mustang tradition, with triple vertical LED bars used as lights, but there’s now a horizontal beam that joins them up. More black plastic adds chunky SUV-styling around the wheels and some visual height along the sills. That’s needed as, despite being four-wheel-drive, ground clearance doesn’t appear to be appreciably greater than any conventional hatchback.

Step up into the cabin - and you have to, as the battery pack lifts the floor up - and you’re presented with something that’s quite minimal. Ignore the massive bright red emergency stop button atop the dashboard and you’ll focus instead on a 15.5-inch infotainment screen that dominates the interior. It would be great to say how well it all works, but this pre-production model (one of just three in Europe) didn’t have a fully functioning system. However, Ford’s existing Sync-3 system works well, so it shouldn’t be too tricky to use. 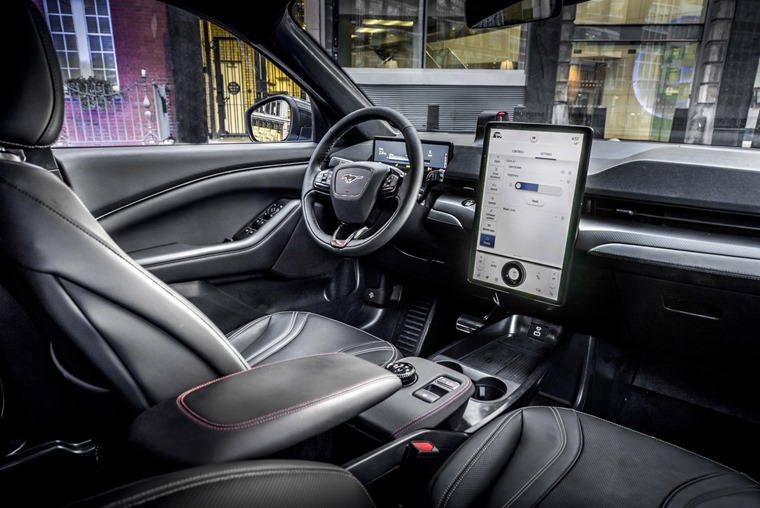 Impressively, a physical dial ‘floats’ on top of the screen, allowing for easy volume control or, I would assume, quick selection of other options such as climate controls. Pleasingly, there's a small digital instrument binnacle in the traditional place behind the steering wheel, allowing for critical information to be presented directly to the driver.

Expectations of its driving dynamics are set very high, mainly because it’s got that famous Mustang badge.

Space is generous, with enough legroom and headroom in the back to keep most happy. The same is true upfront, as you would expect, but the boot looked a little small with a surprisingly high floor. Nothing about the cabin stood out as being emotionally engaging like the traditional Mustang, but Tesla buyers could be swayed by the new style. 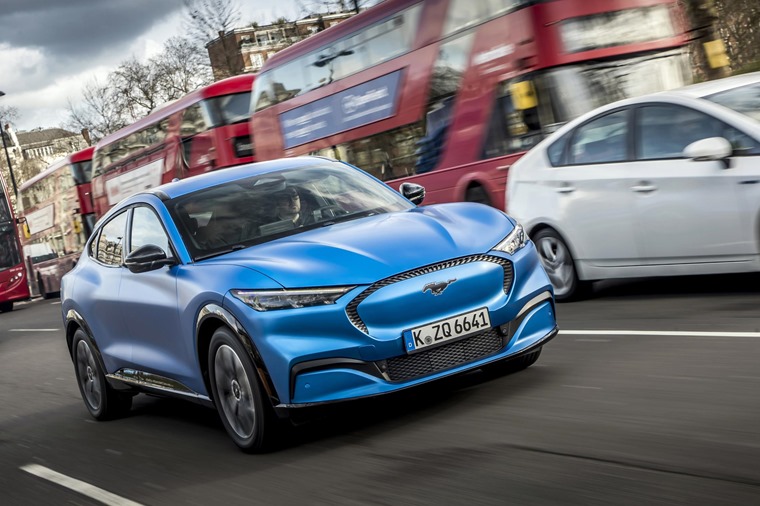 The engineers promise that the Mustang Mach-E will be the real deal when let loose on an open road.

Expectations of its driving dynamics are set very high, mainly because it’s got that famous Mustang badge on the front and rear, which is why central London seemed a weird choice for a first drive. To make matters worse, it wasn’t even a drive - the offer was very clearly just a passenger ride, as Ford wasn’t going to let one of its invaluable prototypes loose on public roads with a journalist at the wheel. Fair.

A quick acceleration demo in an underground car park proved the Mustang Mach-E is quick, but it’s no quicker than many of its rivals. It’ll hit 62mph in around five seconds, roughly the same as it takes a regular Tesla Model 3, but that depends on which model you choose. 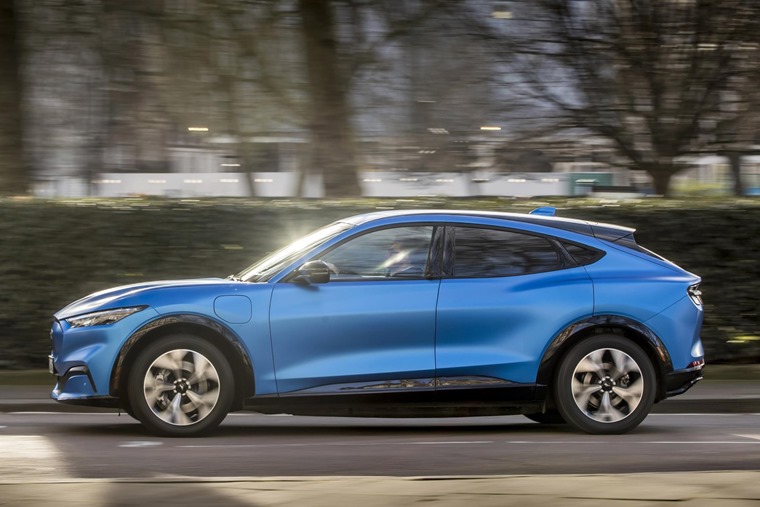 There’s anything from 260hp to 470hp to pick from, some with rear-wheel drive and some with four-wheel-drive, and each with different size battery pack options. You'll be able to extract the most range or the most performance using the drive modes available which are called, in all seriousness, Whisper, Engage and Unbridled. Honestly.

The modes don’t adjust the suspension, which will be tuned specifically for European tastes. That means it’s a little bit on the firm side, but not enough to make life uncomfortable. How does that translate into handling prowess? Crawling around Marble Arch didn’t tell me much, but the engineers promise that the Mustang Mach-E will be the real deal when let loose on an open road. There was talk of a low centre of gravity, as you’d expect from a car with a couple of hundred kilos of batteries in the floor, as well as springs and dampers that are easier to tune thanks to that lower point. 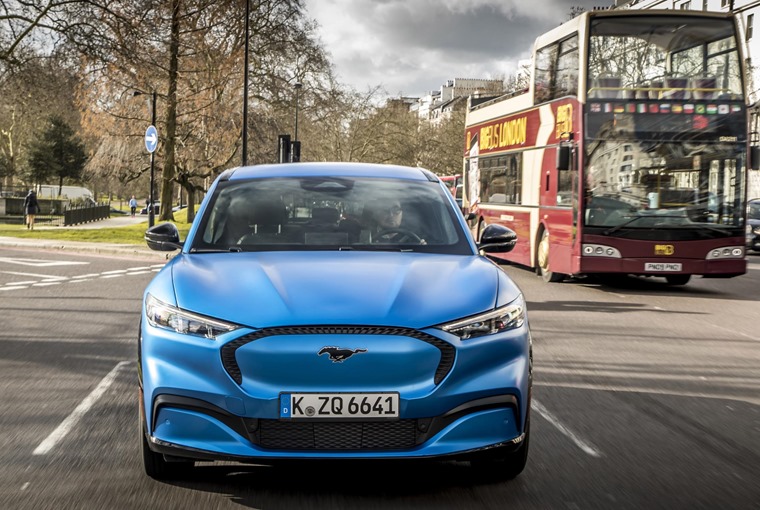 I’d love to give a full verdict but, given the circumstances, that’s really impossible. The positive points are that the car looks good, is practical enough to please most, promises strong performance, and has a battery range that could get you more than 350 miles down the road.

Pricing is strong too, with the entry-level model expected to cost around £40,000. Although with leasing options this doesn’t mean much. Certainly it’s tempting enough for Ford to have already sold out of the First Edition model, with its 98.8kWh battery pack, all-wheel-drive, 335-mile range and every option box ticked.

Having ‘Mustang’ in the name does rather raise expectations though. Had Ford followed on from Puma and Kuga with something like ‘Linx’ then nobody would bat an eyelid if the car was anything less than stellar. Instead, it’s piled the pressure onto itself by using that name but, given the enthusiasm and confidence of the engineers around the project, there’s a feeling that they might just have pulled it off.