Rivals are catching up and the Civic Type R certainly doesn’t have the class all to itself any more, but we’d still very much recommend it as a hot hatchback that’s worth serious consideration. 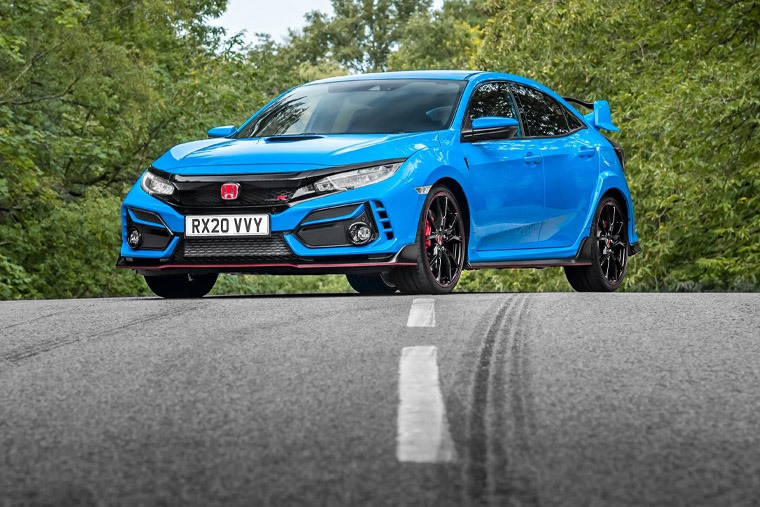 This is the Honda Civic Type R, a veritable hot hatchback legend that’s well worthy of being mentioned in the same breath as cars like the Volkswagen Golf GTI. And then some.

As with most hot hatchbacks, this has humble beginnings, being based upon one of the UK’s more staid and sensible family cars. But Honda’s engineers haven’t just breathed on the Type R - they’ve chewed it up and spit it out at the other end as an almost unrecognisable fusion of outlandish styling and pure driving excitement. 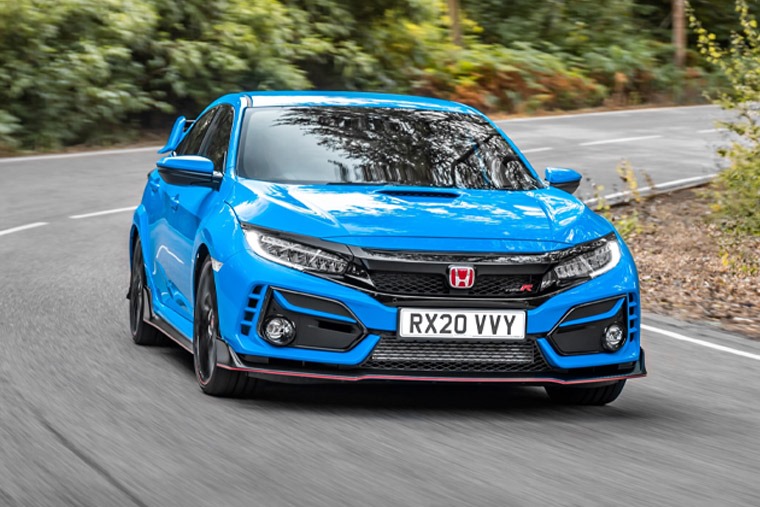 The Civic Type R uses an engine you won’t find in any other Honda. It’s a 2.0-litre, four-cylinder petrol that produces 320hp. That’s not the most powerful engine of any hot hatchback - Mercedes-Benz, in particular, fits far more powerful units to its AMG-fettled A-Classes - but it still offers highly impressive performance.

This, then, is a family-sized hatchback that’ll hit 62mph from rest in just 5.8 seconds, and given a long enough piece of autobahn can top out at 169mph.

The engine pairs beautifully with a six-speed manual gearbox, which is one of the car’s finest features. With a short, snappy shift and gorgeous-feeling metal gear knob, it’s pure crack cocaine for keen drivers, who might find themselves changing gears just for the hell of it.

The steering is beautifully weighted and provides a good wallop of feedback, so the Civic’s very satisfying to pilot through a series of corners - where you’ll find the Type R very responsive without feeling excessively darty. Compared to a Golf GTI, the Civic Type R feels glorious to drive, and incredible fun. 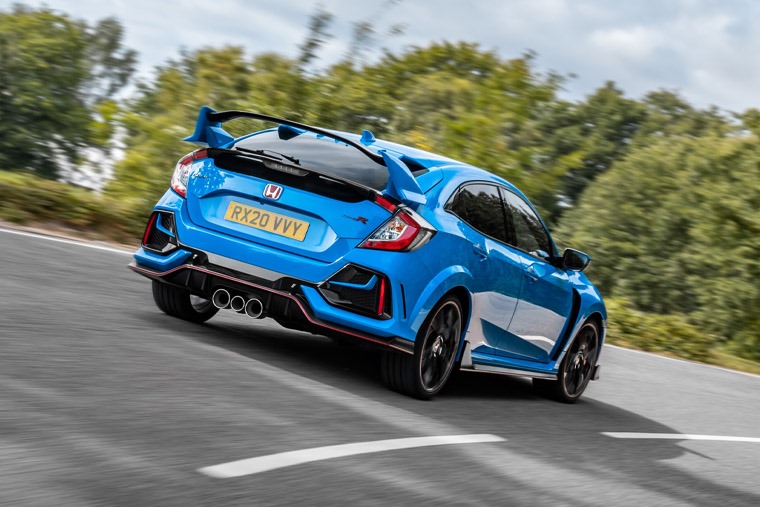 The payoff is ride comfort that can’t match the best hot hatchbacks, and this Civic does tend to thud over bumps in the road. But this is a hot hatchback, not a long-distance cruiser, and the excellent seats do a good job of keeping you in place whether schlepping along the M25 or stringing together the corners of a sweeping B-road.

Fuel economy isn’t even too bad given the car’s performance bent - Honda claims 33.2mpg, which you’ll only achieve if you drive like a saint. The high 20s ought to be possible, though. 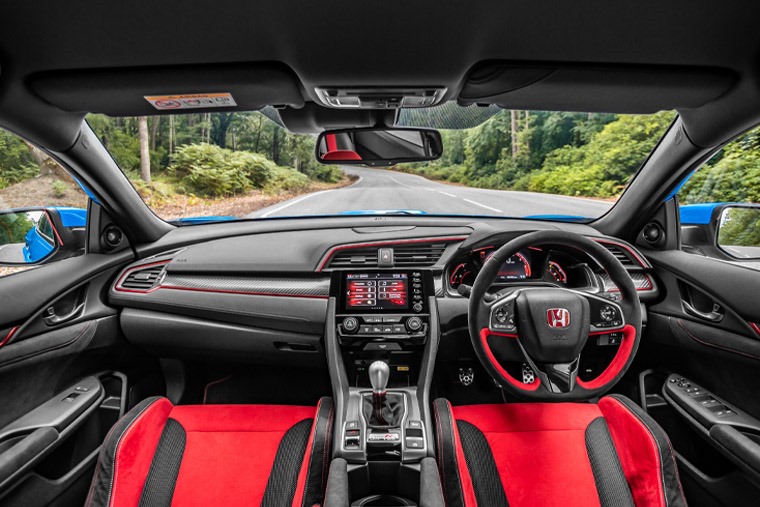 Even the regular Civic has its good and bad points about the cabin, but they’re rather amplified in the Type R.

First, the good. Build quality is impeccable and there’s a great deal of space inside here, with a big boot and space for adults to stretch out in the rear.

The aforementioned seats and gear knob are both excellent, and the wheel very tactile.

The aforementioned seats and gear knob are both excellent, and the wheel very tactile. The digital dash is a plus point, too. Though it’s not as customisable as some rivals, it’s very legible, bright and clear, and ideal for getting the information you want from a glance. 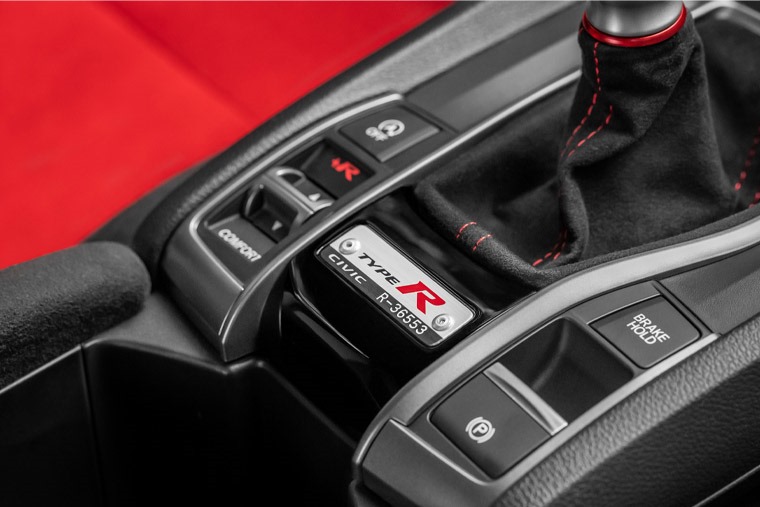 However, the Type R’s infotainment lets it down somewhat, especially compared to models such as the Mercedes-AMG A35 or Volkswagen Golf GTI which offer far slicker and more modern-feeling systems. Then, there’s the design - which is dull as ditchwater and only slightly lifted by copious red highlights across the dashboard and in the steering wheel. Highlights that don’t look quite so impressive when the car is blue. 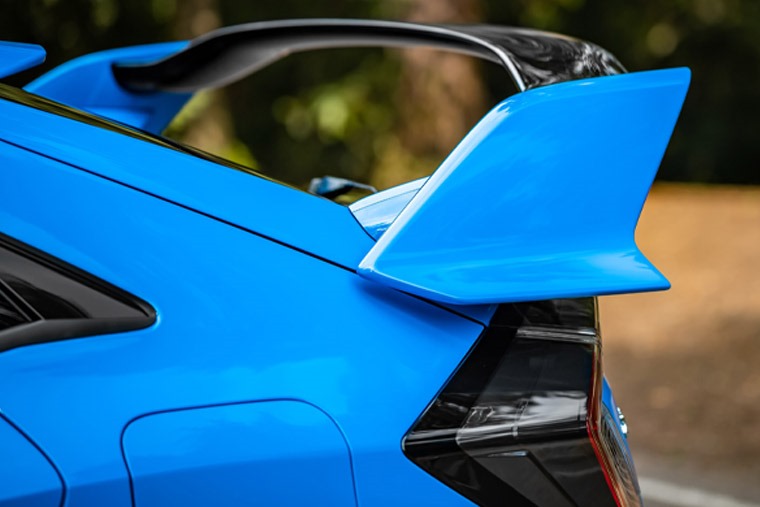 For the money, the Civic Type R remains one of the finest hot hatchbacks money can buy. It offers performance and involvement to shame cars costing twice as much, and given Honda’s reputation should prove reliable and dependable for years to come.

It offers performance and involvement to shame cars costing twice as much.

Rivals are catching up and the Civic Type R certainly doesn’t have the class all to itself any more, but we’d still very much recommend it as a hot hatchback that’s worth serious consideration, especially as there’s now the choice of a (marginally) more luxurious version.