Honda has hit the ball out of the park with the e, producing something that drives, handles and rides well, looks a million dollars and, crucially, is an appealing car in its own right.

Look at it. Just look. Is there a cuter car on sale right now? In fact, has there been one cuter in the last, ooh, 30 years or so? Drive this and you’ll attract attention everywhere you go. 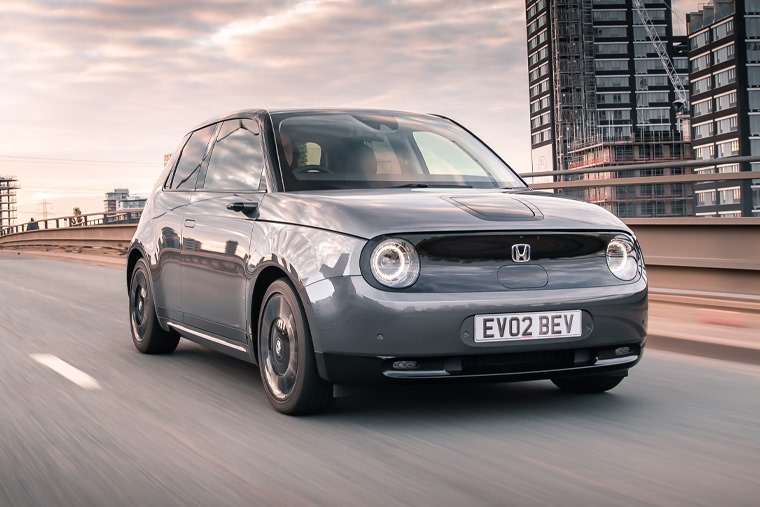 And I mean that literally. Whether I was cruising along the M4 or navigating my way through Windsor, I was stared at by most, while some gave a thumbs up. Other drivers and riders would pull alongside and glance over, again giving a thumbs up. Not one person displayed anything that could be construed as negative, and I had the windows open in town so I could hear what was being said.

Honda’s excelled in managing to make a car hark back to its historic roots - it really does have so many hints of the 1972 Civic hatchback - as well as looking like a near-future interpretation of the car. Stylistically, it’s nailed it. If you ignore the black panel on the bonnet, that is. 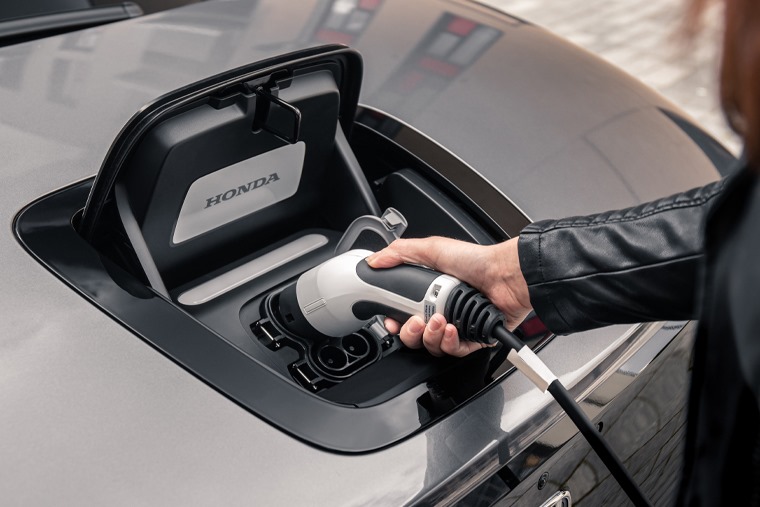 Under that panel lies a charging port, as there’s no engine in this diminutive bundle of cuteness. Instead, there’s a 35.5kWh battery pack mounted low down in the floor, with a single electric motor producing 154hp and 315Nm of torque. All that goes through the rear wheels, too. Extracting all of the power is as simple as mashing your foot to the floor, where the e will jump from a standstill to 62mph in eight seconds.

Of course, as with all electric cars, it feels rather zestier when driving as the instant power translates to near-instant acceleration at urban speeds. Once above 40mph it starts to feel the strain a little, but will happily carry on to motorway speeds and beyond. 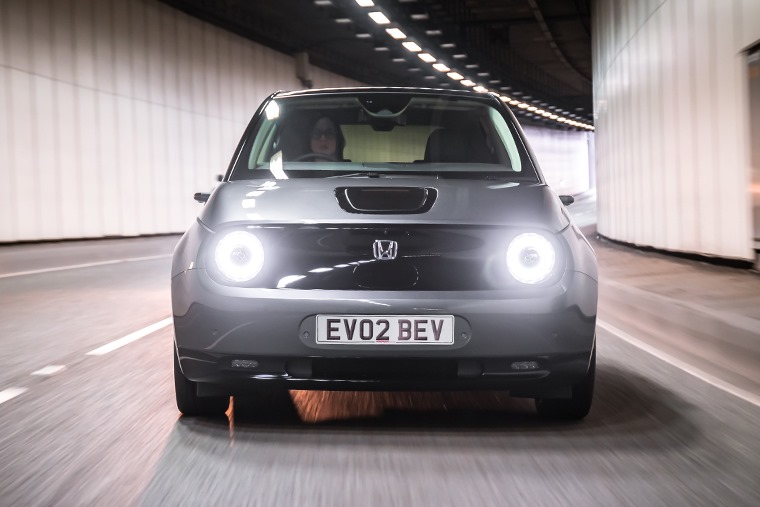 Motorway speeds will affect the range, draining the battery more quickly than gentle driving around town, but even then you might end up fearing there’s not enough power - with a WLTP official range of just 125 miles, and a real-world figure of around 100 miles, long journeys might be a problem.

However, Honda is gambling that a compact range in a compact car (it’s less than four metres long) will appeal to a segment of customers who realise the limitations but don’t feel they will interfere with their lifestyle. That’s true for most people, too; the average daily journey is well under 30 miles, with journeys of more than 100 miles few and far between. With rapid charging at up to 100kW allowing an 80% charge in just 30 minutes, the Honda e is probably far more practical than you might imagine.

Practicality takes a dive when you start looking at space. The boot is, frankly, laughable. With just 171 litres of storage space there, you could squeeze in 15 basketballs. You could 40 of them in the back of a Renault Clio.

The same is true of the rear seats, which are tiny. But, seriously, does anybody really care? Honda really should have made this a three-door, two-seater car, but nobody buys those and everybody insists on having rear seats that will never get used for more than throwing a bag onto. It’s all about the front of the cabin.

From there runs a bank of screens showing every bit of infotainment data you could imagine, from maps and radio to energy efficiency and pictures of a forest.

And boy, what a cabin it is! Video screens run, literally, from one window to the other. At the far left is a screen that displays the view from the exterior camera mounted on the door - there’s no wing mirror, just a high-tech solution that improves style and airflow. From there runs a bank of screens showing every bit of infotainment data you could imagine, from maps and radio to energy efficiency and pictures of a forest. You can even have a fully animated digital aquarium, with options to change the scenery, number and even type of fish on display. 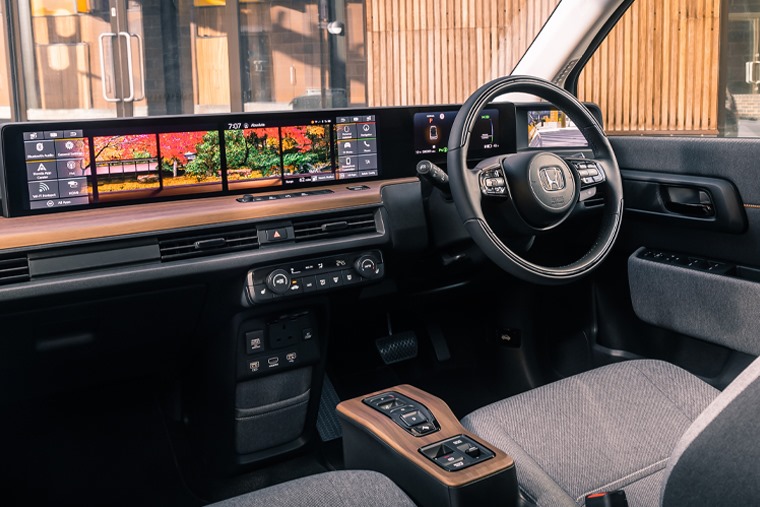 Despite the overwhelming array of pixels, it’s all presented in a gloriously minimalistic style that oozes quality. The clearly-not-real wood trim contrasts beautifully, with the grey trim of the seats adding balancing neutrality. Little touches show thought, like the cupholder hidden behind a panel that pulls out with a leather strap, or the three-pin plug socket low down by the USB port allowing you to plug in a laptop charger or similar.

Once you’ve got the car and set it up how you like it, it’ll be great.

It’s when it comes to using those screens that problems surface. Honda isn’t known for its cutting edge infotainment technology, and the graphics are all rather rudimentary. There are certainly better-looking systems out there, but it’s the ease of use that’s a problem. You can move screens from one side to another, swapping and changing as you go along, but it’s not intuitive. Switch from nav to, for example, the phone menu to make a call and all works well. At the end of your call, press back a few times and you end up not at the navigation but the wallpaper, literally staring at the woods. Other options are buried deep in menus, while some seem to be stuck to the menu at the far side of the car. I’m sure that, once you’ve got the car and set it up how you like it, it’ll be great, but you’d be brave to try and make any changes. I can only imagine how fantastic it would be if Volkswagen, Volvo or BMW got involved to build the interface.

It’s a big step up from, say, a Nissan Leaf.

The e recovers some ground on the way it drives but, even then, there are a couple of significant niggles that frustrate me arguably more than they should. It’s rear-wheel-drive - something you only remember when you put a bit too much power down on a gravel driveway - which promises a near-perfect weight distribution. That feels about right, the e zipping and darting from side to side at little more than the flick of a finger. The steering is as taught as any modern car gets, and it rides well over almost all surfaces. It’s a big step up from, say, a Nissan Leaf. 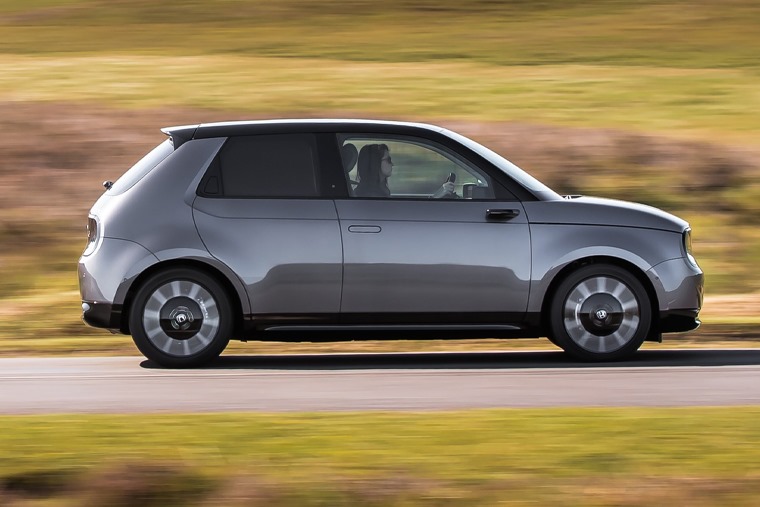 Energy-saving aids like adjustable regenerative braking (used to recover space energy when slowing down) are in place too, helping to stretch that limited range. However, there's a quirk; you can adjust the strength of the regen braking using the steering-wheel paddles, but then the car ‘forgets’ what you’ve done a couple of miles later and you end up without the extra braking assistance. Likewise, switching on cruise control resets everything, which can be a surprise when you knock it off on the approach to traffic lights. It leads to an inconsistent level of braking which is, at best, irritating and at worst, dangerous. 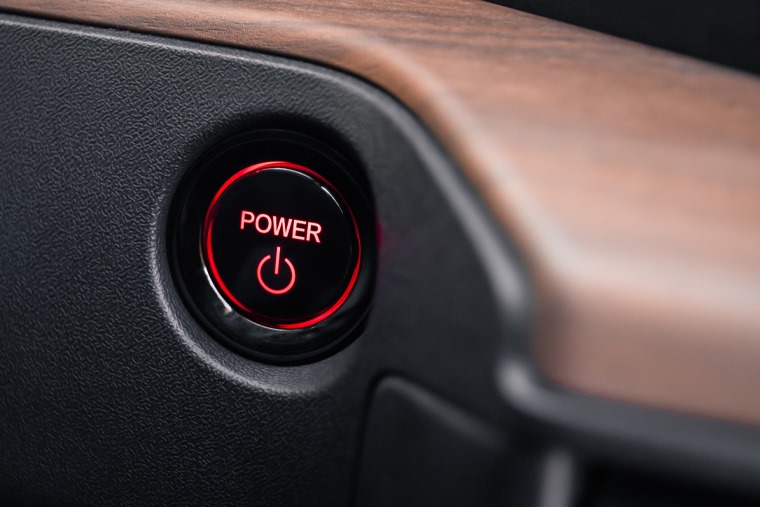 But, really, who cares? Most won’t ever touch those settings and, even if they did, they’d forgive it everything because of the way it looks. They’re already paying £100 a month more for the Honda than a rival (the cheapest lease deal I could find was around £300 a month, while the e-Golf and Zoe are around £200) so the Honda e must appeal to the heart rather than the head, unless prices change.

On that count, and despite the flaws, Honda has hit the ball out of the park with the e, producing something that drives, handles and rides well, looks a million dollars and, crucially, is an appealing car in its own right. There’s no need to add “for an EV” to the end of that sentence.