If you need luxury, you can spec it up to have everything you want. If you want space, it’s got plenty. Low running costs? Well, 64.1mpg suggests it won’t be expensive. 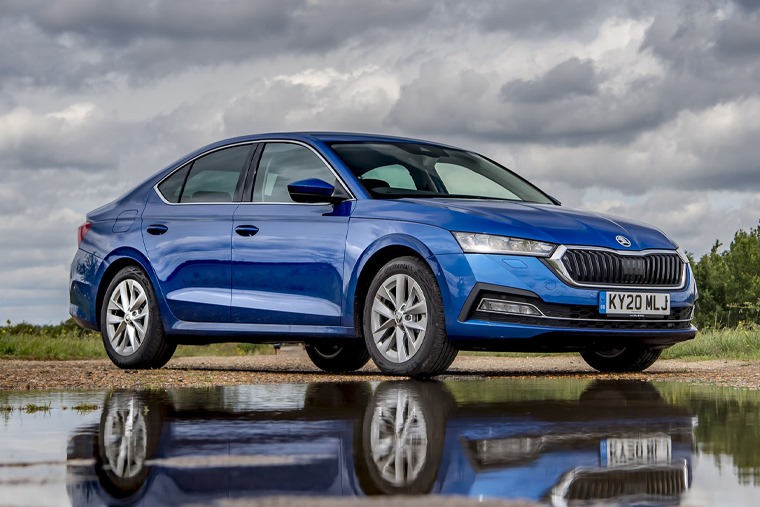 It’s almost 25 years since Skoda introduced the Octavia, a figure that shows how far the brand has travelled from its roots, and a figure that’s depressing as I clearly remember the car being shown at the motor shows of the time and that can’t be 25 years ago.

Back then, I was probably somewhat unimpressed, my younger self wanting powerful rear-wheel-drive sports cars or impractical supercars to drool over. A sensible family hatchback barely registered. Now I’m still just about in the right half of my forties, I still like a proper sports car, but I’ve grown up to recognise how important sensible, family motoring really is.

And, if you’ll excuse me for jumping ahead a little, I doubt there’s a more capable, sensible form of family transport right now than the new Octavia. It. Is. Brilliant.

Starting on the outside, there’s increased confidence in the design. Skoda’s have been getting more mature with each generation, and this fourth-gen model makes no apologies. It’s not trying to be the value option, it’s showing itself as a straight head-to-head contender to the new Golf. Low slung at the front, with a classic profile and an elegant rear, this could be a car from any of the German premium manufacturers.

The bodywork covers the Volkswagen Group’s MQB chassis, a platform that has seen action in everything from the Audi TT to the Volkswagen Tiguan, but it’s been strengthened a little for the Octavia, making it a little stiffer. Other than that, there’s little change underneath from the old model; the electric power steering remains, as does the independent front suspension and the multi-link or torsion beam options at the rear. Everything has been tweaked a little though, making the car more comfortable. 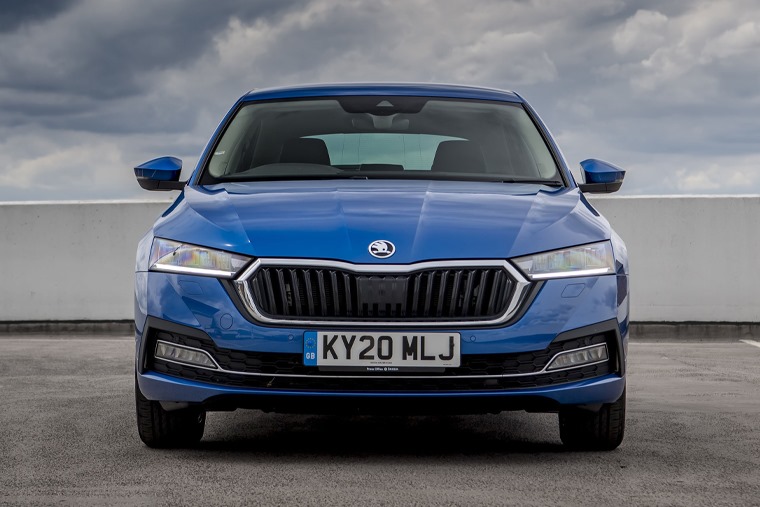 Step inside and you’re presented with a new dashboard design that manages to look seriously classy, while also being easy to use. Dominating things is the 10-inch infotainment screen offering access to everything you’d expect, from Android Auto and DAB radio to navigation and driving statistics. Directly in front of the driver, behind the new two-spoke steering wheel, is another big screen, this time 10.25-inches, that operates as a fully customisable instrument panel. There’s also an optional head-up display, for the first time on a Skoda. 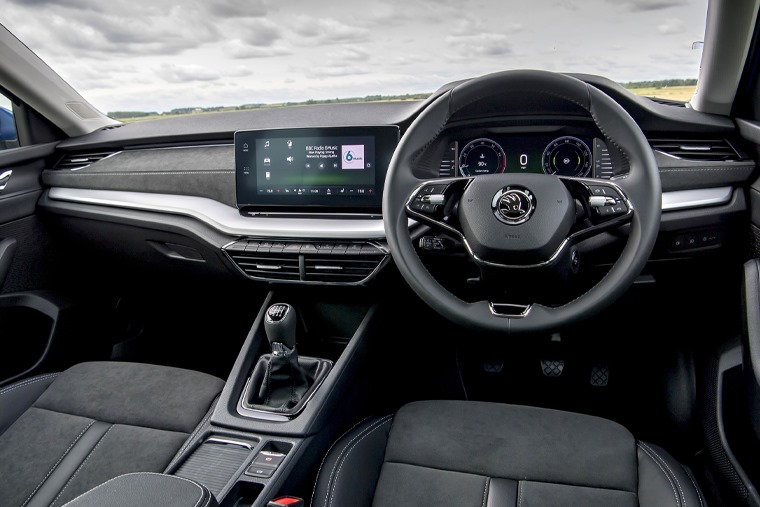 Dominating things is the 10-inch infotainment screen offering access to everything you’d expect, from Android Auto and DAB radio to navigation and driving statistics.

This all sits above a wing-shaped band that runs across the front of the cabin before running down the side, albeit with a bit of a gap and, below that, there’s loads of space where the gear lever used to be - that’s been replaced on the DSG auto models with a selector switch that really opens up the cabin. 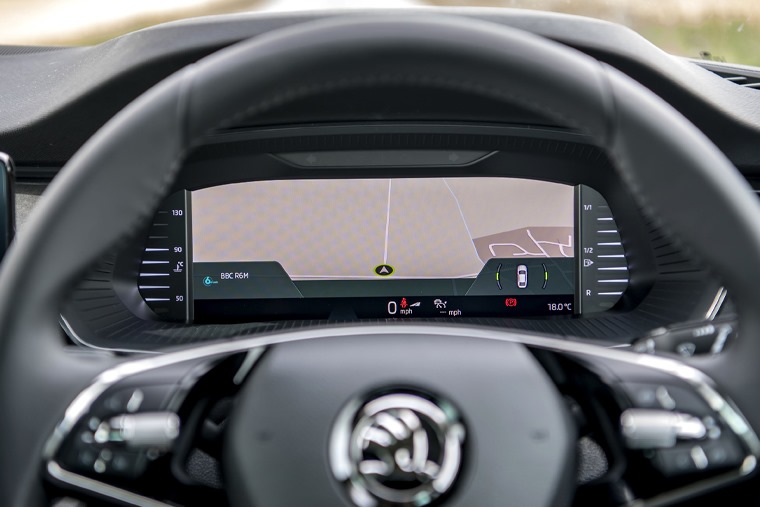 It’s full of clever little touches that Skoda calls Simply Clever. Plenty exist in other cars, and we won’t go on about the umbrella in the door or the ice scraper in the fuel filler flap, but I will mention the smartphone pockets in the back of the front seats that the kids can use to hold their phone. I’ll also mention the USB socket up by the rearview mirror, ideal for plugging a dash-cam into, negating the need for cable dangling everywhere.

There is some evidence of cost-cutting; despite this being the top of the range model, there’s no reversing camera, there’s some uncovered metal visible around the doors, the boot lid is manually operated, and the car doesn’t default to park when you’ve finished driving. As there’s no gear lever, it’s easy to skip pressing the P button, especially when the handbrake applies automatically.

In the real world, few of those issues really matter. What is really important to buyers of the Octavia is space and economy. This has both, almost to excess. The boot is huge, at 600 litres - that’s 25% larger than the back of the Volkswagen Golf. 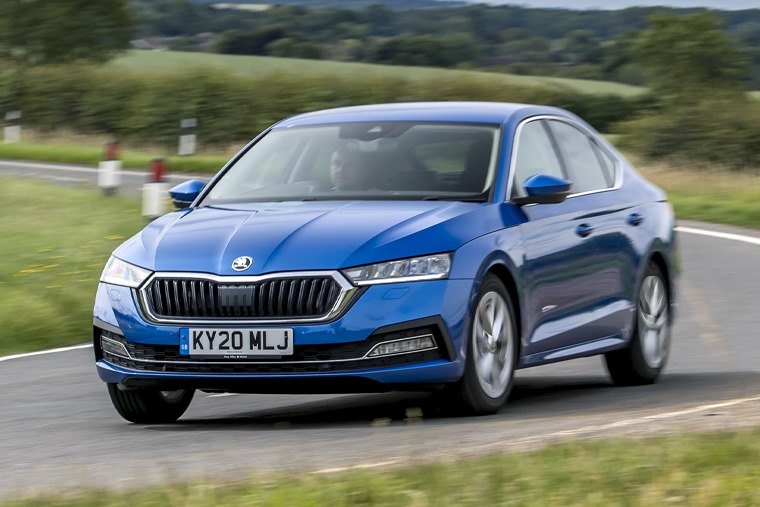 As for economy, the 2.0-litre 150hp diesel engine in this model almost refuses to use any fuel. Officially, with the optional 18-inch wheels fitted, it should return 59.9mpg. The reality is that, over 400 miles of mixed driving and no effort to drive particularly economically, the Octavia returned 64.1mpg. Who needs a hybrid?

On a motorway run, where this model really is at its best, there’s barely a ripple from the suspension. You can feel a jiggle or two at lower speeds, but it’s amongst the smoothest of cars out on the open road. That suggests that mimicking Skoda’s rally drivers might not be a great idea and, while it’s true that the Octavia is very definitely set up for comfort rather than speed, it’s nicely balanced and utterly predictable when pushed. Body roll is controlled, if not quite contained, and the steering allows for precise placement of the car. I suspect you could make rather more swift progress than you might imagine, although there’ll be little excitement as you do so.

If you need luxury, you can spec it up to have everything you want.

In fact, who needs anything other than an Octavia? If you need luxury, you can spec it up to have everything you want. If you want space, it’s got plenty. Low running costs? Well, 64.1mpg suggests it won’t be expensive. A sporty drive? Ok, you might miss out on that, but then there is a sporty vRS version coming soon.

See? Everything you need.