The new engine has transformed the truck, but it’s decision to install it into the lifestyle-friendly Invincible models shows us what buyers Toyota is targeting.

Along with our van leasing deals, we have pickup deals available for lease. Have a browse to find your Toyota Hilux 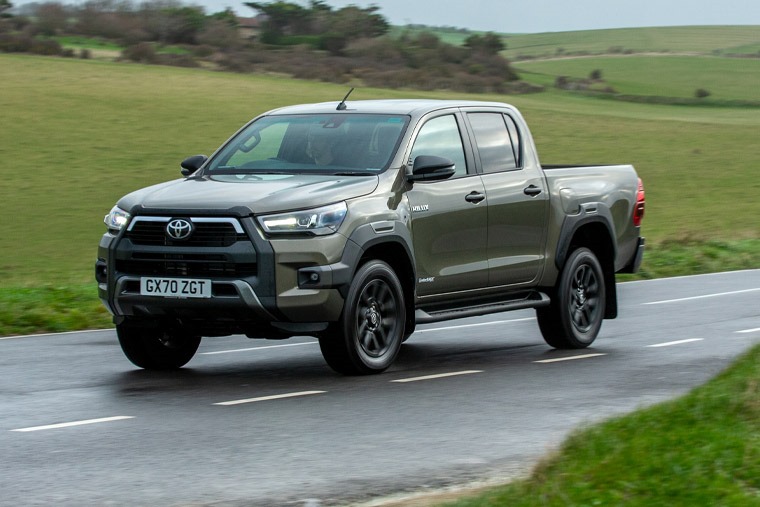 Everybody knows about the Toyota Hilux. Much of that might be down to Top Gear’s repeated attempts to destroy one, only to prove that this mid-size pickup truck really is indestructible.

It’s got a fearsome reputation for longevity already, dominating sales in Australia and much of Africa, where a breakdown in a remote part of the countryside could be fatal. In some territories, it accounts for 40% of the market. Not just the pickup truck market, but all cars and trucks.

In the UK, it’s less successful. Even amongst limited competition, it makes up for just one in eight pickups sold.

That’s partly down engine choices. Until now, there was just one, a 2.4-litre diesel that put out a scant 150hp. With 70% of UK buyers wanting something far more powerful than that, Toyota was missing out. 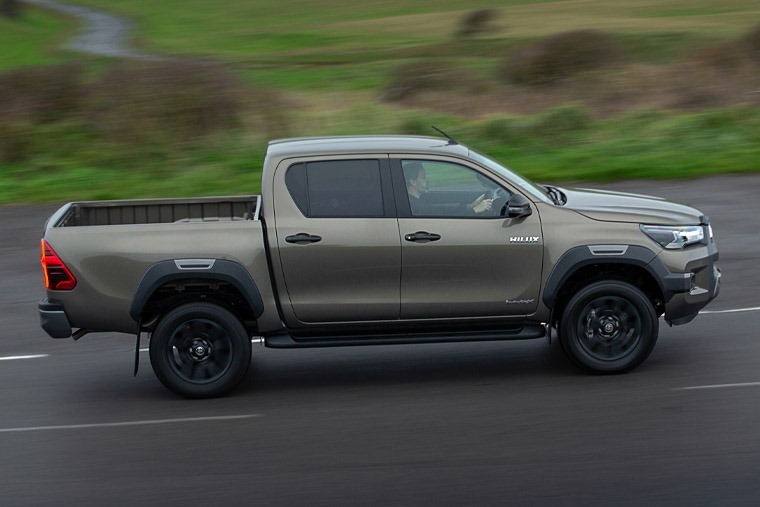 Fortunately, Toyota has remedied this in the latest Hilux facelift, an update that’s seen the relatively soft face of the truck taking on a large, hexagonal grille that sits above a revised front bumper. Opt for the top-of-the-range Invincible X and you get an even more dramatic nose, with a grille surround that flows down to a skid plate, surrounded by blackened chrome headlights. There’s also pseudo-tough plastic cladding around the wheel arches and a chunky panel on the tailgate.

Despite being a relatively mild cosmetic update, the result is significant, bringing the Hilux bang up to date.

There’s less going on inside, but the new 8in infotainment touchscreen lifts the cabin a little, and it now comes with Android Auto and Apple CarPlay so you can avoid using Toyota’s less than stellar system. The screen has physical shortcut buttons around it though, which is a welcome addition and makes it far easier to use when driving or being thrown around off-road. 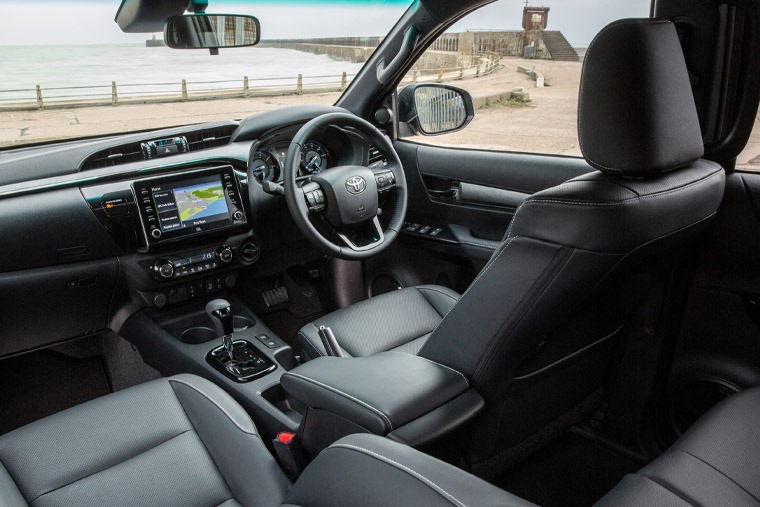 Splash out on the X and you’ll get navigation and a JBL sound system with nine speakers. Everything else gets a DAB radio, Bluetooth connectivity and a regular sound system, apart from the Active that makes do with an FM radio and CD player, and no touchscreen.

The screen has physical shortcut buttons around it though, which is a welcome addition...

The cabin borrows design cues from road-going Toyotas, albeit Toyotas from ten years ago. It’s a reasonably car-like environment, and top models are loaded with kit; you’ll find climate control, adaptive cruise control, heated front seats, a leather-covered steering wheel and steering wheel mounted audio controls on this Invincible test model. We’re less impressed by the single USB port, which feels rather stingy, and the Active’s paucity of equipment might upset some users but fleet managers will appreciate the savings.

End users and owners will appreciate the new engine, and it’s the addition of a 2.8-litre turbo diesel that’s the big news for the revised Hilux. Producing a hefty 204hp, and matching that with 500Nm of torque, the new unit puts the Hilux right up towards the top of the class in terms of power.

Performance is improved dramatically, with the truck now powering to 62mph in 10.1 seconds, but it’s the mid-range acceleration that’s been transformed - no longer are overtaking moves things that need careful planning, a lot of luck and a following wind, making the Hilux safer in the real world.

No longer are overtaking moves things that need careful planning, a lot of luck and a following wind, making the Hilux safer in the real world.

A smooth six-speed automatic transmission keeps up with demands well, the decision to avoid chasing countless more rations allowing the Hilux to rely on its surfeit of torque instead of endless gear changing.

However, the new engine is only available on those high-spec Invincible models, with everybody else relegated to the old, wheezy 2.4-litre unit. 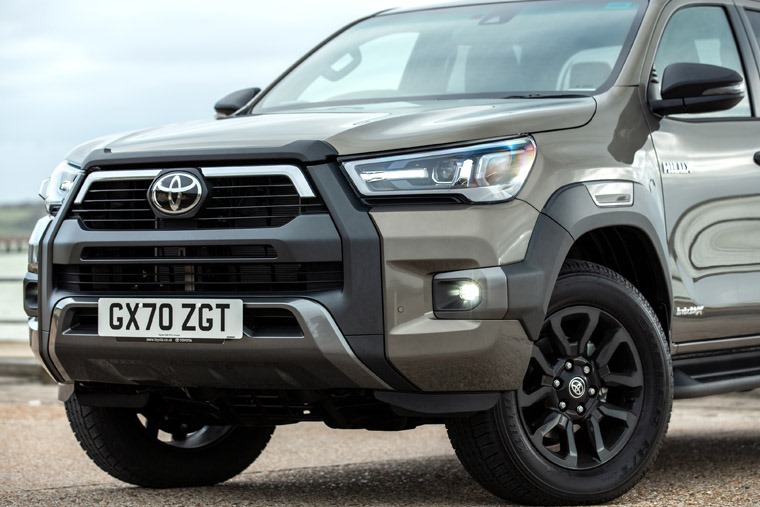 Revised suspension improves the ride quality, too. It’s still got tough leaf springs at the rear, but they’ve been lengthened and the dampers and bushes adjusted. It’s now set up to ride best when empty, reducing the bounce and shake you get from pickups on the road. It’s still firmer than a Ford Ranger or Volkswagen Amarok but is definitely improved. How will these changes affect the handling when fully loaded? Unfortunately, we’ve not had a chance to test that yet.

Off-road action remains as impressive as ever, but the inclusion of an automatic limited-slip differential makes a forest track a piece of cake to pass through.

The changes have reduced the Hilux’s payload, with the Invincible X rated at 1,085kg for HMRC purposes. The Active grade double cab, which retains the existing 2.4-litre engine, can carry 1,105kg. All models retain the ability to tow up to 3.5 tonnes, but also now benefit from Toyota’s trailer sway control, a system that works with the brakes to keep a truck and trailer in a straight line if the trailer starts to swing from side to side. 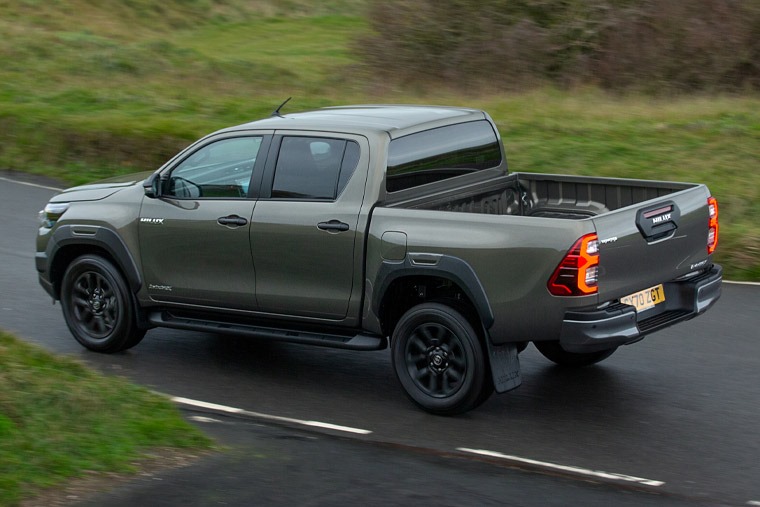 Toyota has managed to address most of the issues with the Hilux, although that’s quite easy when they tend to revolve around the engine. The new engine has transformed the truck, but it’s decision to install it into the lifestyle-friendly Invincible models shows us what buyers Toyota is targeting.

All models retain the ability to tow up to 3.5 tonnes, but also now benefit from Toyota’s trailer sway control.

Commercial users will still appreciate the Hilux’s rugged abilities, even if the workhorse Active and Icon spec miss out on the new power unit, but it’s those switching from SUVs have the most to gain.