If Volkswagen released this car in 2020, nobody would bat an eyelid. If you spot a good deal, snap it up. It still feels fresh, drives well and looks good.

There might be a new-generation Volkswagen Golf available now, but there won’t be an electric version to replace the outgoing e-Golf model. That honour goes to the slightly futuristic-looking ID.3 model that Volkswagen is hoping hip young buyers will flock to. 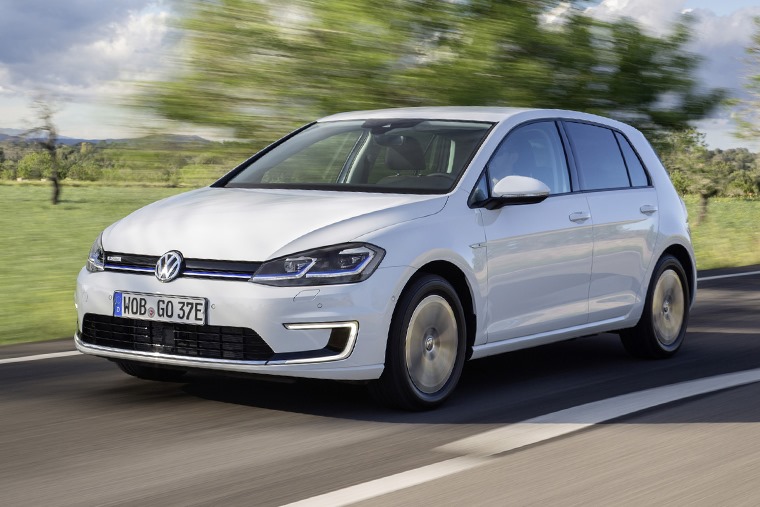 For many, eco-friendly motoring isn’t about driving something that alerts everyone to how worthy you are. It’s more about quietly going about your day, saving some money and relaxing in a car that’s easy and quiet to drive.

Fortunately, Volkswagen isn’t stopping production of the current e-Golf for some time yet, which means you can still drive an electric Golf that looks just like a regular Golf. 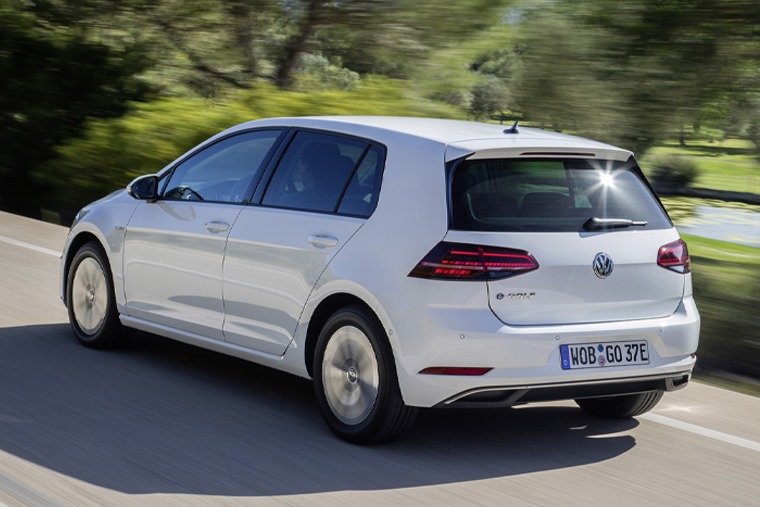 You can still drive an electric Golf that looks just like a regular Golf.

It even feels like a regular Golf, as it shares the same chassis and suspension as the petrol-powered models. Only by opening the bonnet and spotting the electric motor in place of the usual engine options will give the game away, although the eagle-eyed will spot that it has a unique wheel design, e-Golf-specific lighting at the front, and some blue detailing dotted around.

The same holds true inside the car, where it’s very much like a Golf. It’s got the same dashboard setup, with a lovely 8in touchscreen mounted in the centre stack. Ahead of you sit traditional dials, while even the gear lever echoes that of the regular automatic model. 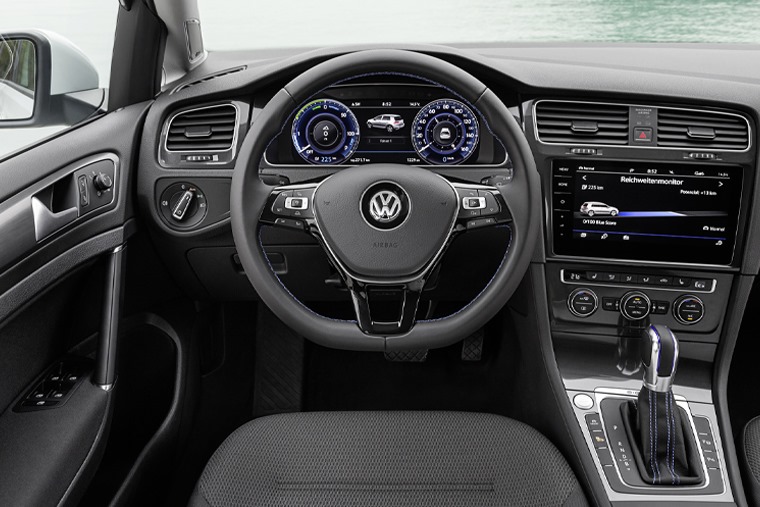 Volkswagen has placed the battery pack beneath the floor of the car, including under the boot, so it loses a little of its luggage carrying capability. However, that’s all taken from the compartment below the boot floor, an area few actually ever use, so you may find there’s no difference at all. The now-old Golf has a boot that can take 380-litres of shopping, pushchairs or photocopier maintenance agreements, while the e-golf sees that drop to 341 litres. As a comparison, you can get 375-litres of stuff in a Ford Focus. 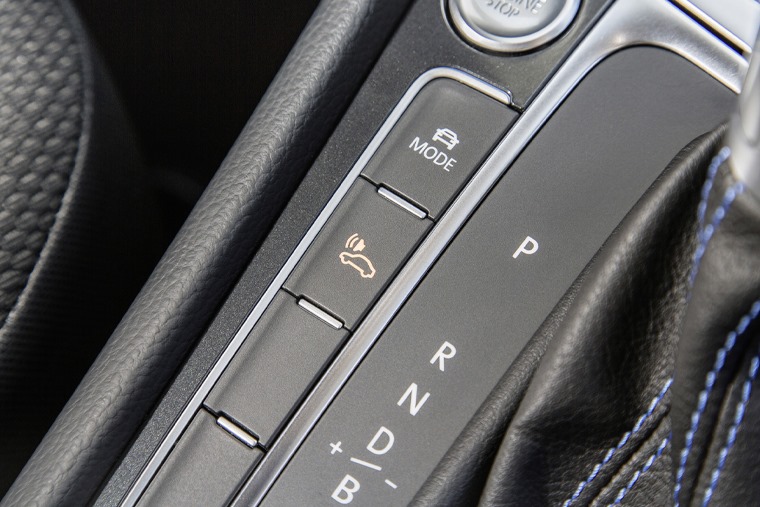 By taking that space, Volkswagen has left the cabin entirely unmolested, so there’s enough room for four adults to get comfortable, or five to squeeze in and grumble about the matter.

Everybody will be happy with the equipment Volkswagen has squeezed in, from DAB radio and Android Auto to climate control and cupholders all around, amongst a long list of standard equipment.

Drivers will appreciate the adaptive cruise control, driving modes and built-in navigation. They’ll also appreciate the way the e-Golf drives, especially if it’s being compared to a Nissan Leaf. As with all EVs, acceleration is brisk, especially up to urban speeds, and cruising at the motorway limit is a cinch - there’s 136hp available, and a healthy 290Nm of torque, which is enough to power the e-Golf to 62mph in 9.6 seconds. It reaches its terminal velocity at just 93mph, but that’s well above the UK speed limit so shouldn’t worry anybody. Right? Good. 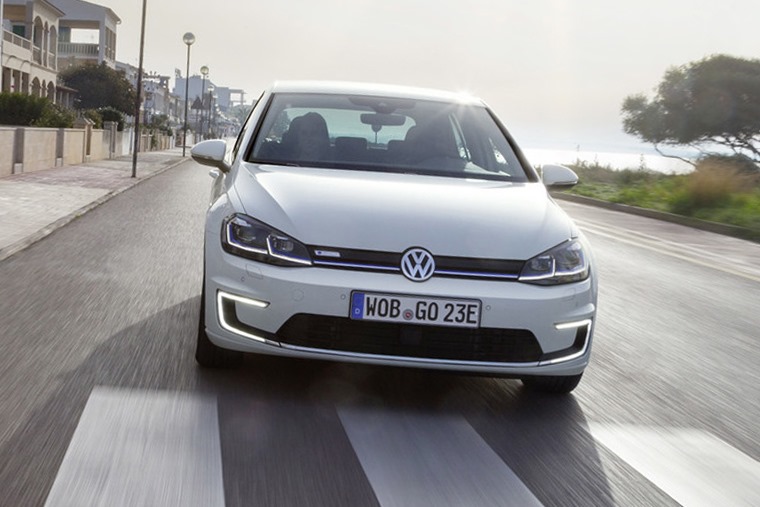 It’s more engaging than you might expect and more pleasurable than anything this side of the premium choices.

Corners are also a joy, with beautifully damped suspension allowing you to place the e-Golf with precision. It’s no sports car, especially with the extra weight of the battery pack to be lugged about, but it’s more engaging than you might expect and more pleasurable than anything this side of the premium choices.

Reviewing an electric car means nothing if we don’t talk about the elephant in the room - range. The e-Golf has a 35.8kWh battery pack, which is smaller than you’ll find in any comparably sized car, which means the official range is just 186 miles. Real-world results put that at closer to 120 miles and, should you find yourself covering lots of motorway miles in the dead of winter, you might be lucky to reach 100 miles.

Anything else I need to know? 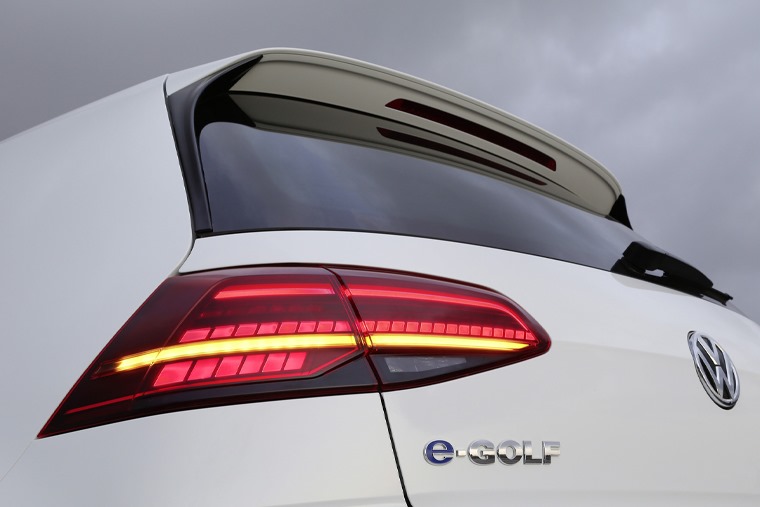 The infrastructure is much improved from the early days of EVs, and a common rapid charger will see the Golf topped up in 45 minutes.

Those high-mileage drivers who need more should look elsewhere - the e-Golf will be nothing but frustration to you - but most drivers really only cover 30 or so miles a day. That 120-mile range means you can travel without worry for most days, and put up with the mild inconvenience of recharging when travelling farther afield. The infrastructure is much improved from the early days of EVs, and a common rapid charger will see the Golf topped up in 45 minutes. Splash out on a home-charger and it’ll become second nature to simply plugin when you get home, ensuring the car is fully charged whenever you want it.

With a new Golf on the market, and the ID range of cars on the way, there’s a chance you might suffer buyer’s remorse and worry that you’ve got an outdated model, but that’s to do the e-Golf a disservice. It still feels fresh, drives well and looks good. If Volkswagen released this car now, nobody would bat an eyelid.

It’ll also save plenty of money - as a very rough idea, your electricity bill will be a quarter of your petrol bill, with somebody covering 1,000 miles a year saving as much as £1,200 on their fuel bill. Add in zero-rated car tax and, for business users, a 0% BIK rate, and there’s plenty of money to be saved.

And, thanks to some cracking lease deals, it’s more cost-effective to lease the electric Golf rather than facing the rather steep £31,075 retail price tag. For those savings, you might just overlook the limited range and consider the rest of the e-Golf benefits to be had.