The Geneva Motor Show took place this week and provided enough thrills and spills to last us well into the future. If you missed out on anything, check out our top five concept cars from the show and the key cars revealed. 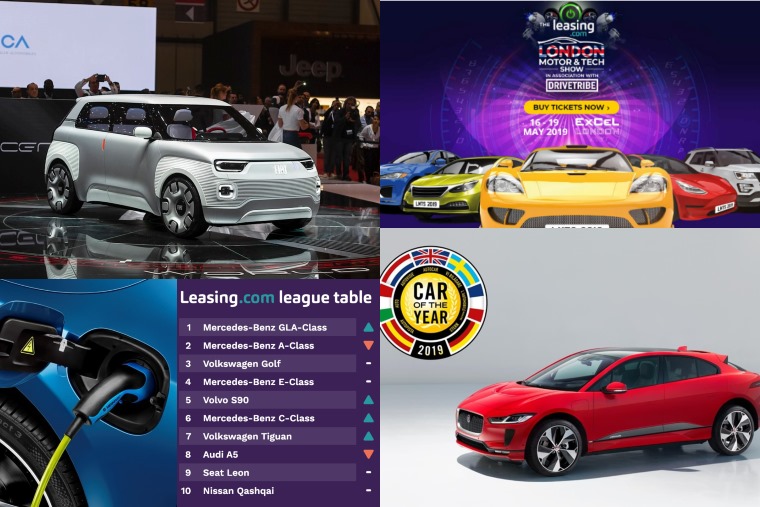 While a variety of reveals from the show stole the headlines, here’s what else you might have missed this week: 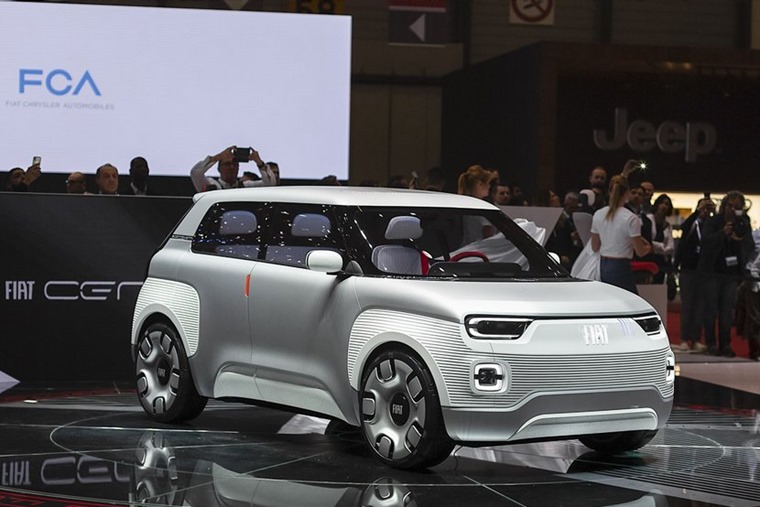 If there’s one thing people seem to go crazy for at motor shows it’s supermini electric cars. First there was the Honda Urban EV back at Frankfurt Motor Show in 2017 and now there’s the Fiat Centoventi at Geneva 2019.

To celebrate Fiat’s 120th anniversary, Centoventi offers unprecedented customisation, with the interiors, accessories and spaces all adaptable to create a car which is genuinely unique.

This level of customisation goes a step further with a modular battery pack which allows drivers to extend the range from 62 to 310 miles simply by buying or renting additional battery units.

At the rear, the large tailgate features an innovative display that enables you to display messages to those behind you. When the vehicle is on the move, the car will only show the Fiat logo, but once it stops, the driver can switch to "messenger" mode. We’re sure people will use that feature responsibly…

2. Leasing.com London Motor Show will host the Women’s Car of the Year Award

Given the rise of female car purchasers world-wide, the female voice is more important than ever. As such, it’s fitting the Women’s World Car of the Year award trophy is set to be presented at the Leasing.com London Motor Show.

On the 16 May the journalists will present a trophy to a representative from Volvo for the XC40 winning the 2018 Women’s World Car of the Year supreme award. The following day, the Woman of Worth award will also be presented to Fiona Pargeter, Global Comms Director for JLR.

To celebrate International Women’s Day and the announcement, visitors will be able to get 10% of ticket prices by entering the code ‘Womensday” at ticket checkout. This offer will be valid until midnight on the 8th March. 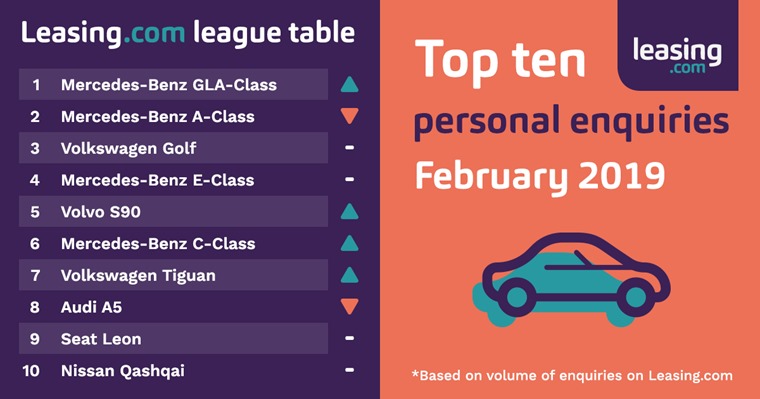 Half of the vehicles in February’s top ten most popular vehicles are from Mercedes-Benz, with Volkswagen Group also featuring prominently.

The Mercedes-Benz GLA-Class compact SUV was the most enquired on vehicle during February, rocketing up the table and just pipping its hatchback stablemate, the A-Class, to top spot.

The rise of the GLA-Class during February can be attributed to affordable deals on the GLA 180 Urban Edition 5dr Auto, the derivative that earned most of the enquiries on Leasing.com.

It was a close contest between the I-Pace and Alpine’s Porsche-rivalling A110 coupe, with each car sharing 250 votes – that’s the first time there’s been a draw since the European Car of the Year award started in the 1960s.

Taking into account which of the jurors voted each car ahead of the other in the shortlist, a recount took place, and the Jaguar emerged victorious with 18 votes more than the Alpine.

5. The plug-in sector helped the UK car market grow for the first time in five months 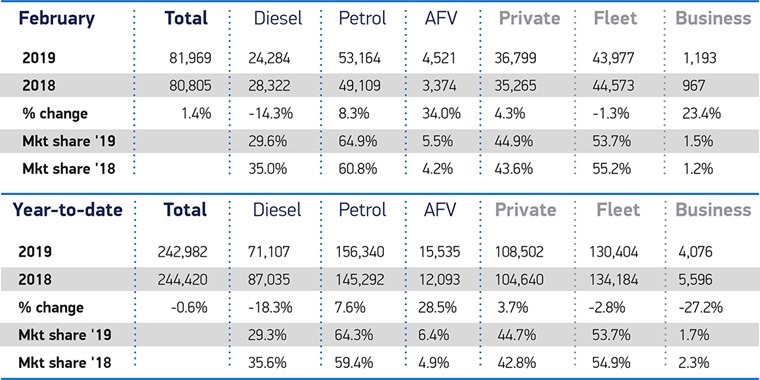 New figures from the Society of Motor Manufacturers and Traders reveal that the UK’s new car market enjoyed marginal growth of 1.4% in February – breaking five consecutive months of declining registrations.

Demand for alternatively fuelled vehicles (hybrids, plug-ins and electric vehicles) continued to increase – up 34% year on year and marking the 22nd consecutive month of growth for the segment.

The positive news for the electrified sector comes as manufacturers revealed more than a dozen all-new electric and plug-in models at the Geneva Motor Show. There’s already around 40 models available in the UK, with another 20 or so expected to launch during 2019 so expect this trend to continue.