Citroen has revealed further details of its all-electric e-Berlingo range – a small van that’ll be available later this year and offer an alternative to the Renault Kangoo ZE.

Like the combustion-powered version, it’ll also be available as a large passenger vehicle, making this one of the most practical electric MPVs on the market with a 174-mile range.

It’s one of three near-identical small vans receive an electric drivetrain – the others being the Vauxhall Combo-e and Peugeot e-Partner.

On the outside, things look much the same as any other petrol or diesel-powered Berlingo. Two body styles are available, with the e-Berlingo capable of carrying a maximum of 800kg across 4.4 cubic metres.

Passenger versions can be specified in five- and seven-seat format, with Citroen confirming it’s packed full of clever storage places too (26 to be exact). Options include a panoramic sunroof, while all models get sliding rear doors – handy for those tight car parks.

Under the floor, however, you’ll find a 50kWh battery pack that powers a 135hp electric motor. The batteries’ placement also means internal cargo space remains the same as combustion-powered Berlingos too.

Citroen says it can achieve up to 171 miles between charges, while charging the batteries via a 100kW fast-charger will see the e-Berlingo receive an 80% charge in just 30 minutes. Plugging it into a wall box, you can expect the same charge in around seven hours. The interior gets several updates, mainly revolving around the new EV drivetrain. There’s a new drive mode selector, while the 5in infotainment system has been redesigned to incorporate key info such as the battery state and available range. Head-up display is also available, as it a larger 10in touchscreen infotainment system with satnav.

You can order the e-Berlingo with keyless entry, a rear-view camera and front parking sensors to name but a few options, while safety equipment has been enhanced too. Lane keep assist, active braking and a trailer assist system are all options. 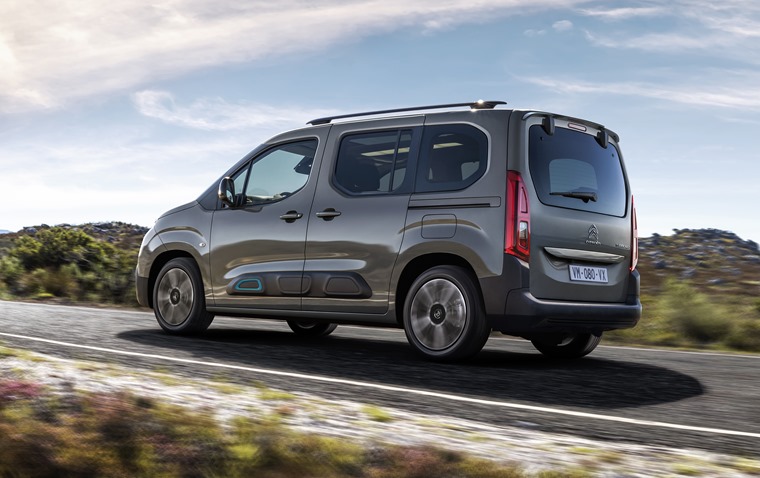 Set to arrive towards the end of 2021, the e-Berlingo will suit fleet drivers that require EVs for city driving, while its impressive range means it can be used for longer journeys too.

We’ll bring you more details when we hear more.