There might be quicker cars to cross a country in, but I can’t think of one that engages in the same way, that connects with you and lets you feel as if you’re a genuine part of the driving experience. 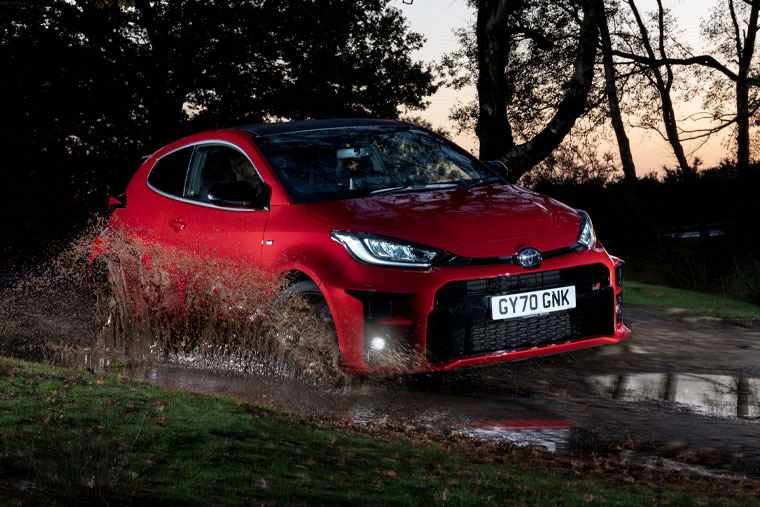 The Toyota GR Yaris is an absolutely epic hot hatch. Those words, hot and hatch, don’t even do it justice, as it’s so much more nuanced than that. This isn’t a one-trick pony that can nail a 0-62mph sprint, but a car that makes every drive, every cross country run, something closer to a piece of art than a simple journey.

Now you know that this is a five-star car, somewhat giving the game away as to how this review is going to go, allow me to explain why.

The car for the experience.– Leasing.com five-word review.

Yes, there are faster, more powerful cars on the road. The Yaris, as good as it is, won’t hold a candle to a McLaren Senna down a drag strip. But, give it a twisty lane through rural Sussex and the McLaren driver will be wondering which way the GR Yaris went. 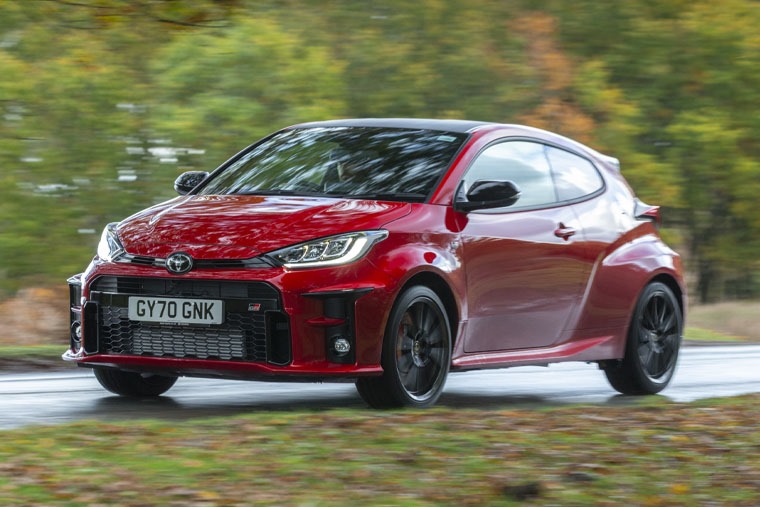 To find out why we need to rewind a little. Toyota’s entry in the World Rally Championship has been a success, with the last-generation Yaris performing well, and even winning the manufacturer’s title in 2018. It wanted to do better, but the rules for rally cars are tight - you need to make 25,000 road cars before you can enter that model into the championship. Not a problem for the Yaris, as Toyota has sold more than eight million of them in its first 20 years on sale.

However, the way to win is to design a car specifically for rallying, rather than compromise with a converted road car, but the maths just don’t add up which is why it’s 20 years since the last rally special, the Mitsubishi Lancer Evolution VI. Add in the market changes wreaked upon the world by the coronavirus pandemic and the inevitable ban on internal combustion engines and you’re left with a business case weaker than a can of Foster’s.

When you’re as mighty as Toyota, with its £17.5bn of profits in 2019, a bit of money spent on a niche model isn’t such a difficult decision to make, which is where the GR Yaris comes in. 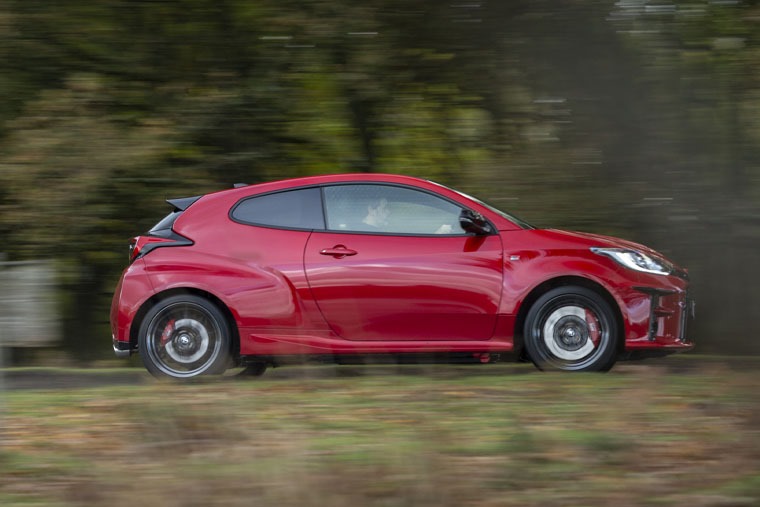 Don’t be misled by the Yaris name. There’s a passing resemblance, but this is a custom-designed model built for rallying rather than a modified family supermini. Externally, there’s not a single body panel shared between the GR and the normal hatchback, although the headlights remain the same.

What looks broadly similar to the Yaris’ bodywork is made from steel, aluminium (the doors and boot lid) and carbon fibre (the roof), boosted by huge wheel arches, a number air intakes, and huge wheels and tyres.

Underneath, there are many more changes. The very front of the chassis is similar, but then it’s all custom made from there. It houses the world’s most powerful production three-cylinder engine, a 1.6-litre unit boosted by a turbocharger to produce 261hp. That power goes through a six-speed gearbox before being fed to all four wheels with mechanical limited-slip differentials at both ends of the car on the Circuit Pack model tested here.

Crawling through some urban roads, the GR Yaris feels fine. The seating position is a little high for my liking, but the pedal location is spot on, the gear lever has been moved a little closer to the driver, and the reshaped and leather-covered steering wheel is adjustable so, even with that extra height, you’re in a near-perfect driving position.

There’s also a track mode, a mode you’d be unwise to use on public roads in most cars. But the GR Yaris isn’t most cars.

Finding the open road, you’re tempted to try the different driving modes. By default, the GR Yaris sends 60% of its power to the rear wheels, which is well balanced and provides a predictable and somewhat exciting driving experience. There’s also a track mode, a mode you’d be unwise to use on public roads in most cars. But the GR Yaris isn’t most cars. 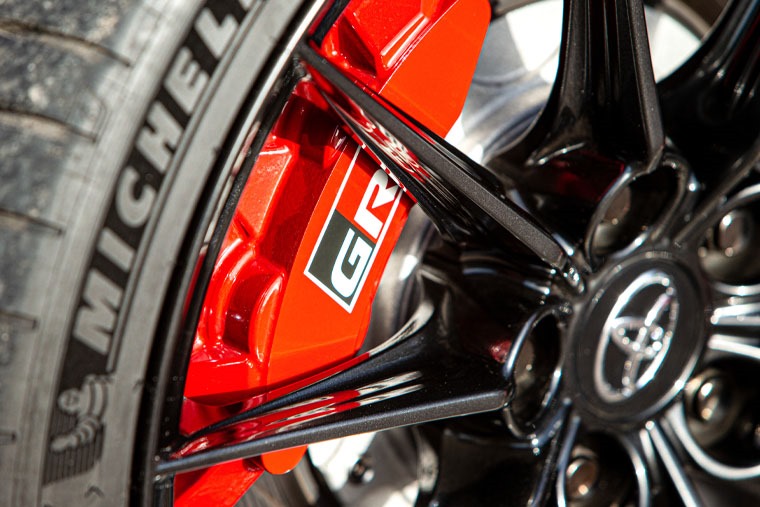 This switches the power to a 50/50 split and transforms the car. It was good in its normal mode, but this enlivens the Yaris, becoming less of a car and more a form of entertainment. Look at an apex and turn in and the front just darts straight there. Millimetre perfect in its trajectory, you can plant your foot on the throttle at the midpoint and feel the differentials working as the car flings you out of the corner towards the next bend. It’s stable, thanks to that wide track, which provides confidence to hold the brakes right into the apex without the car baulking, with the four-wheel-drive system providing incredible traction on the exit. It’s perfectly balanced, compensating for your own ineptitude and demanding that you try again, try harder. Rally legend Tommi Mäkinen helped develop the car, and it briefly lets you think you could take him on, the exhaust note combining with the engine note, transmission noise, g-forces, and every other sensation to release all the good chemicals in your body.

It was good in its normal mode, but this enlivens the Yaris, becoming less of a car and more a form of entertainment.

Electronic aids are there to help but, surprisingly, it’s better without them. The rev-matching Intelligent Manual Transmission blips the throttle to match engine revs while changing gear, but the gearbox is good enough that you can outpace it, so leave it switched off and revel in your perfectly timed changes.

The cabin is a little disappointing. It’s fine in the Yaris, but this is a £30+k hot version and there’s little drama inside to indicate that. It’s spacious enough, equipped well enough, and has plastic that’s perhaps a little too cheap, but nothing to complain about. The rear seats are less convincing, with two tiny seats surrounded by a high window line making it dark and claustrophobic, assuming you can even squeeze through the gap behind the front seats to get in there. As for the boot… 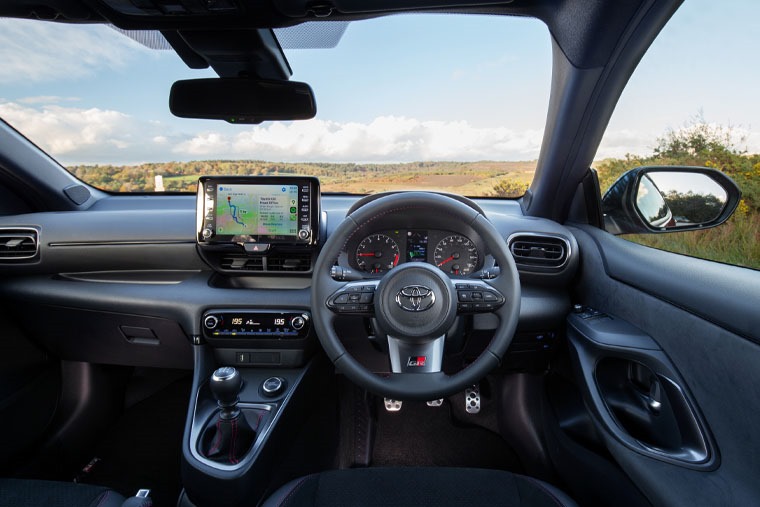 The supportive but not restrictive sports seats hold you in place, allowing you to feel the road beneath you. It's firm, but not uncomfortably so, falling somewhere between the rock-hard Civic Type R and the softer Volkswagen Golf GTI.

Internet forum users will highlight the fact that a Ford Focus RS is quicker to 62mph, or that a Civic Type R has set lap records without four-wheel-drive, but the GR Yaris is so much more than a numbers game. Linear measurements of time don’t explain what the GR Yaris makes you feel. There might be quicker cars to cross a country in, but I can’t think of one that engages in the same way, that connects with you and lets you feel as if you’re a genuine part of the driving experience. You don’t drive it, you feel it, working in partnership with it. Every journey, no matter how mundane, becomes something to savour.

You don’t drive it, you feel it, working in partnership with it. Every journey, no matter how mundane, becomes something to savour.

A supercar might be perfect on a wide-open road in the Spanish sunshine, but it’s useless on a damp, potholed, leaf-covered narrow lane in Sussex, and that’s what we really deal with in the UK. So keep your McLaren, keep your Ferrari. Even keep your Type R and RS. The Toyota GR Yaris trumps them all.

Compare all Toyota GR Yaris deals
Categories:
Previous Post Next Post
Not sure what car you want?
Find your dream car