Volkswagen has given its ID.3 EV a nip-tuck for 2023, with the updated car benefiting from tweaked styling, better infotainment and numerous other upgrades. 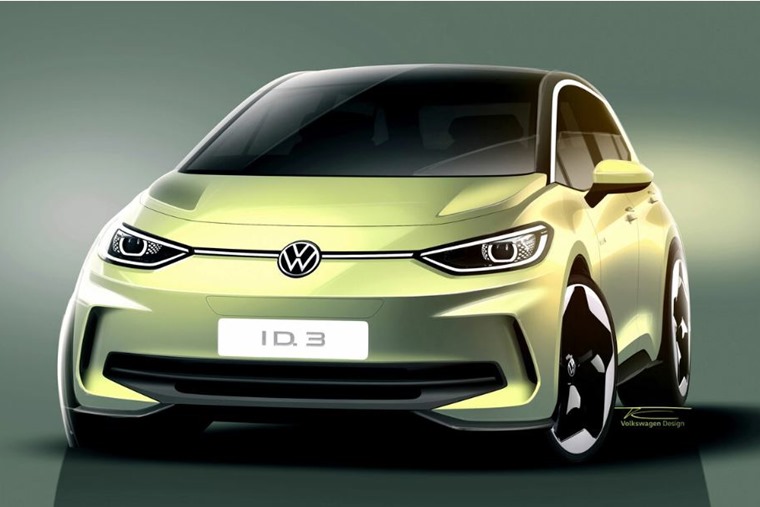 The revised ID.3 has yet to be revealed, but a number of teaser sketches suggest it’ll get an external rework with fresh headlights, a new set of bumpers and several other design tweaks.

The bonnet looks more shallow, with the panel towards the windscreen now incorporated rather than being a separate piece. We’ll have to wait until it’s revealed in full to find out the exact design changes though.

Changes are more significant insude, with the ID.3’s infotainment system getting a significant revamp. For starters the screen has grown from 10in to 12in, and the operating system has been updated.

This means it’s slicker to use than before, while also being easier to understand and navigate. Other changes include new trim pieces and some ergonomic improvements like an extra cup holder and an adaptable boot floor.

No updates to the drivetrain have been revealed, and we expect the battery and power options to remain the same meaning range and power goes unchanged.

There have been some changes though; a clever new system will allow ID.3s to communicate with each other in traffic, warning fellow drivers of accidents, traffic jams and incidents.

We should get some fresh pictures of the ID.3 sometime early in the new year, with the updated model expected to launch in the UK in the Spring months of 2023.

If you can’t wait that long, hit the button below to jump straight into ID.3 deals and compare prices on the current model now.