Volkswagen's ID.3 and ID.4 EVs are now available to lease, but what are the key differences? Which one is the best lease for you?

Volkswagen is well on the way to launching its very own electric revolution. Its range of ID electrified models started out as a host of striking concept cars, but now several are in production and available to lease.

These include the compact ID.3 hatchback and slightly larger, family-orientated ID.4. So, if you’re in the market for an electric Volkswagen, which one of these should you pick? Are they really so different? We take a deep dive. 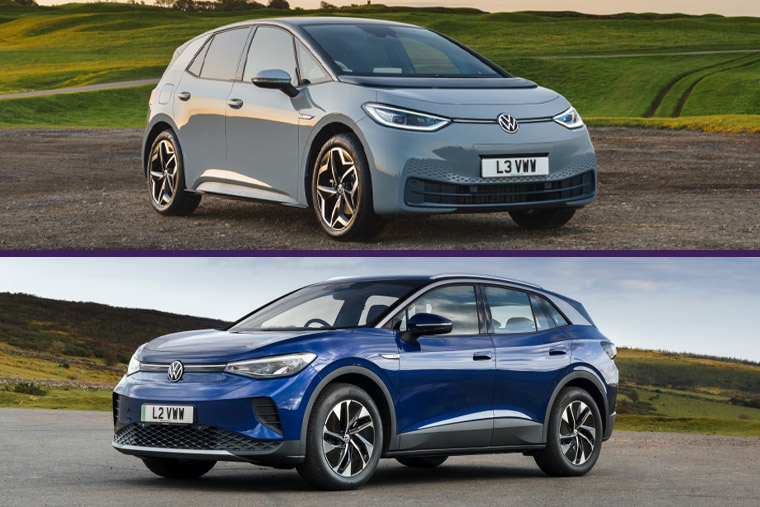 The most noticeable different, from the outside at least, is the body styles of these two cars. The ID.3 takes the form of an average sized hatchback, while the ID.4 looks more like a crossover or SUV. Up front, the ID.3 gets a sloping face that doesn’t even feature a grille. You do, however, get an illuminated Volkswagen badge and a full-width lighting bar depending on specification.

Size-wise, the ID.3 is designed as a direct alternative to the Golf, and its proportions reflect this. The ID.4 is the noticeably larger vehicle of the two, and adds that crossover-SUV appeal thanks to chunky body cladding on the bottom of its doors and around the wheel arches. It’s also 4,584mm long, as opposed to the compact ID.3 that is 4,251mm.

While the ID.3 certainly looks a little out of the ordinary compared to most combustion-powered hatchbacks available, the ID.4 looks more conventional. It doesn’t have a grille, but its more upright appearance at the front and shorter A pillars give it a different appeal to the ID.4. It doesn’t have the wave-effect bumper trim as is present on the ID.3. Instead you’ll find a honey-comb lower air intake and a pair of fake vents on either side.

There might be differences, but the two cars are clearly related closely when it comes to styling cues. The wheelbases are the same for a start. In fact you can expect further ID models to follow the same design philosophy as the ID.3 and ID.4 – the ID.5 is just around the corner. That said, both are easily distinguishable too; in plain; if you want a Golf-sized hatch, go for the ID.3. If you need more space and want a little SUV appeal, the ID.4 is the one for you. 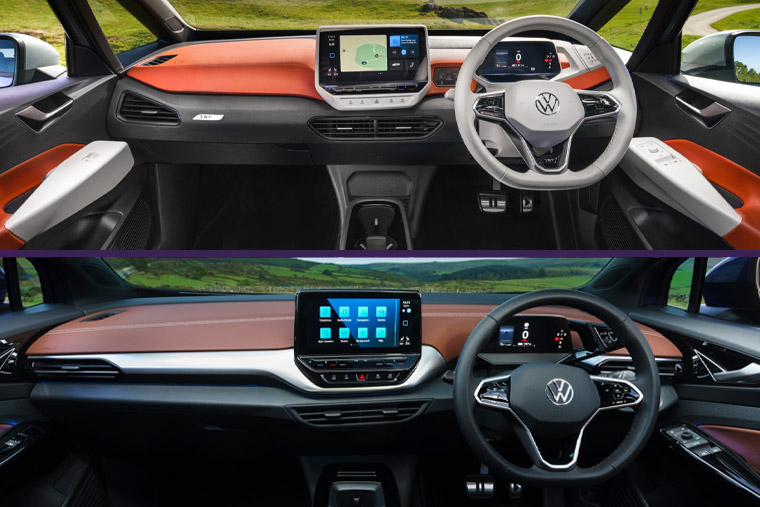 From the driver’s seat, the cars certainly feel and look very similar. For starters, they’ve both adopted a very minimalist approach when it comes to the interior. The dashboards are uncluttered, with the centre-piece being a touch-sensitive panel that includes the infotainment system and climate controls.

These might seem like a nice modern touch, but some people have found that the controls are rather fiddly to use. The same goes for the steering wheel buttons. The pair also benefit from a digital driver cluster, which is crisp and clear, allowing the driver to easily view key information on the move.

Despite having a similar width, the more practical two is by far the ID.4. It immediately feels the more spacious of the pair whichever seat you find yourself in. Leg room and head room the the rear seats are impressive, while its 543-litre boot is a big improvement over the 385 litres the ID.3 offers.

There’s no argument here: if you want the more practical car that’s a perfect fit for families, the ID.4 wins that one hands down. 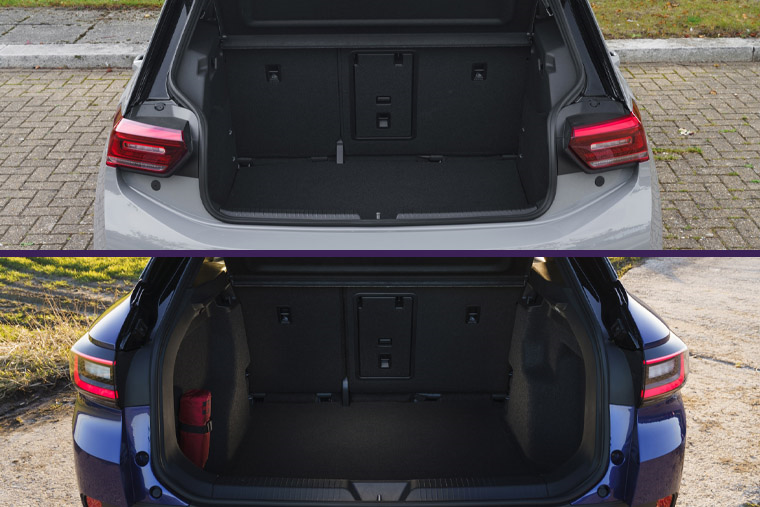 Whether you pick the ID.3 and ID.4, both are available with a plethora of trim levels and packs with many being like-for-like. They might seem a little confusing at first, especially when you’ve got to pick an electric drivetrain option too, but below we’ve done our best to explain the key ID.3 and ID.4 trims currently available.

Let’s start with the ID.3. Trims include Life, Style, Family, Max, Tour, Business and Tech. Depending which one you choose, they’re available in conjunction with a host of battery and drivetrains including Pro, Pro Performance, Pure Performance and Pro S – but more on those later. Each trim also gets a range of packs that are specific to that model.

The entry-level option is Life, which gets the 10in infotainment screen, air conditioning and voice command. There are some oddities though; it gets steel wheels rather than alloys. If you want alloys you’ll have to opt for Style, Max, Tour or Business. The various packs these models come with add features such as keyless entry, dual-zone air conditioning, panoramic sunroofs and loads more besides. 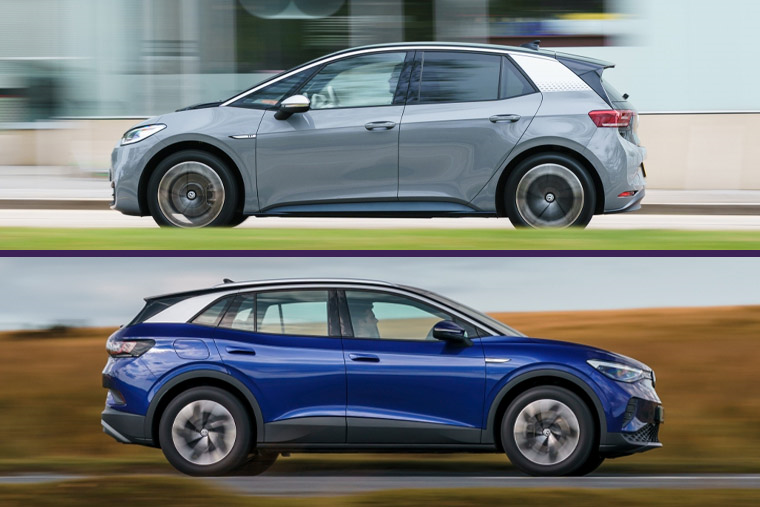 While it might seem complicated, the good news is that ID.4 specifications and trims are pretty much like-for-like with the ID.3, with one big exception: the range-topping model in the ID.4 line-up is the sporty GTX model.

You can consider this the equivalent of Volkswagen’s famous GTI but for the electric age. Kit-wise, it features a sportier-looking bodykit, 20in diamond-cut alloy wheels, augmented reality head-up display, a 12in infotainment system and automatic headlights. The GTX Max takes things to an even higher level, with 3-zone air conditioning and a dynamic chassis control included as standard. 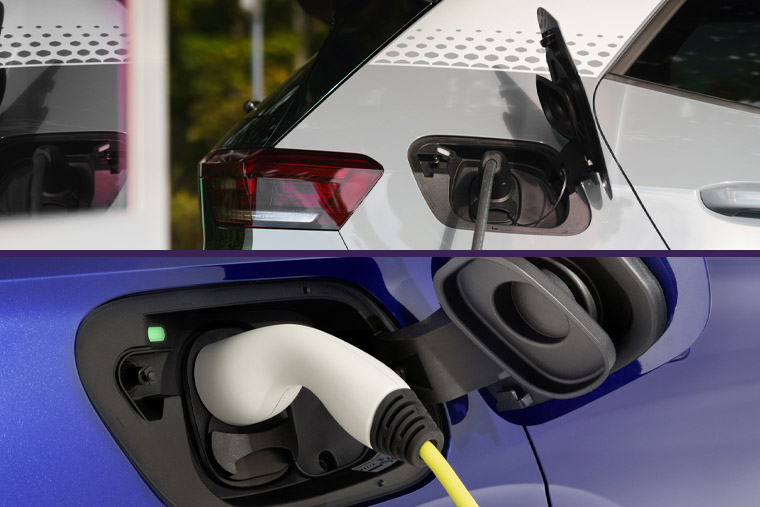 Both these cars offer a fantastic driving experience we’ve come to expect from the latest all-electric cars, but there are some definite differences to the overall driving experience. If you value a high-riding and clear view of the road, the ID.4’s crossover ride height and larger footprint give it more presence on the road. The steering is extremely light and easy to use on both cars, while opting for the GTX can give it performance that can take on the hottest of hatches. But what about these cars’ other battery options?

The ID.3 Pure Performance is the most affordable and smallest battery and drivetrain; it produces around 150hp and musters up to 217 miles of range between charges. There’s also the Pro and Pro Performance models to consider. These make 145hp and 204hp, but both up range to a maximum of 263 miles. The most impressive version from a range perspective is the Pro S model – it gets the more potent 204hp electric motor, but its battery can provide up to 366 miles of range.

Just like the driving experience itself, the range and performance of the ID.4 is very similar to the ID.3. The Pure option uses a slightly less potent 52kWh battery than the ID.3, and provides a range of around 213 miles. It’s not the quickest though. The better option is the Pure Performance model for the ID.4. This reduces 0-62mph times to around 9 seconds but keeps the range.

The Pro Performance model improves 0-62mph times again, getting the car there in 8.5 seconds. Thanks to a larger 77kWh battery, this will increase range to an impressive 322 miles too. At the top of the range you’ll find the GTX models. They get the same 77kWh battery as the Pro Performance, but the dual electric motors are tuned to provide 300hp to the all-wheel drive system. The result is 0-62mph in 6.2 seconds and around 300 miles of range. 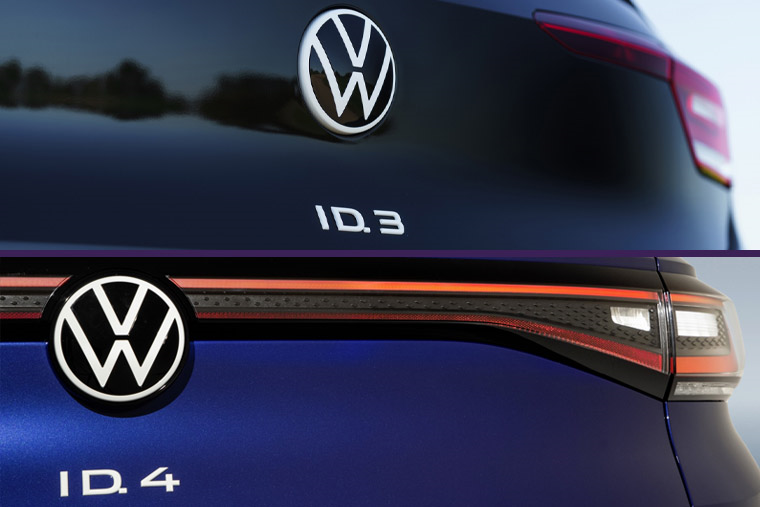 Both the ID.3 and ID.4 are available to lease right now, but which one should you lease? Leasing.com hosts hundreds of deals from the UK’s leading leasing companies, dealers and franchises, so you’ll have unrivalled choice. But, which is best value? As to be expected, the smaller ID.3 starts from around £250 per month with a nine-month initial payment, while an ID.4 in Life specification costs from around the £300 per month mark.

While the ID.3 is a great hatchback, we can’t help but think that for an extra few pounds a month, the ID.4 proves better value for money. It’s larger, but it comes with the same tech and options available on the ID.3. What’s more, in sporty GTX form it gets performance that the ID.3 just can’t match. Whichever you prefer, the key takeaway here is that an all-electric Volkswagen can be yours for the price of a combustion-powered Golf or Tiguan – something that should only boost their popularity over the next few years.