Two performance EVs. Two very different approaches. Is there an obvious winner? We compare the two head to head.

The new car world is increasingly dominated by electrified cars from top to bottom, and in the higher echelons of the EV marketplace, you’ll find the Ford Mustang Mach E and Polestar 2. The pair are aiming to take on Tesla and beat it at its own game.

Both feature impressive performance, class-leading range and offer a great glimpse into what we can expect from the respective brands’ other models over the next few years. We’ve compared them in a number of key areas to see where the similarities and differences lie. Is there an obvious winner? Let’s have a look. 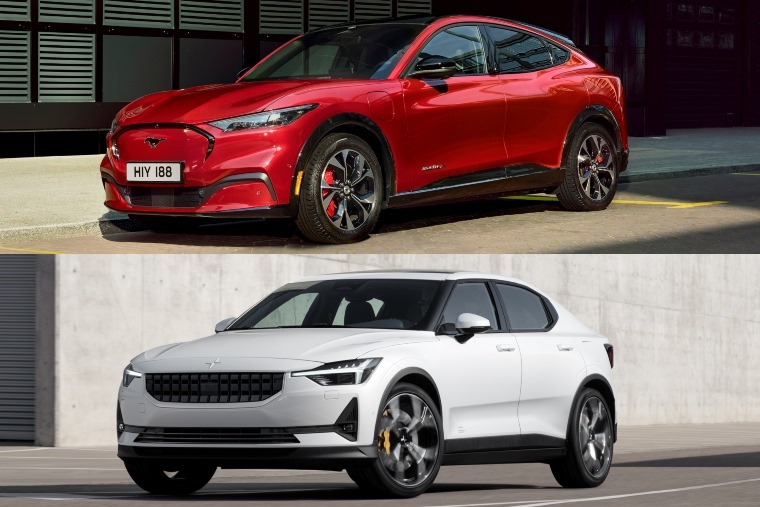 When the Mustang Mach E arrived, it rewrote the EV rulebook. Not only does it offer a look into the future with electric EV styling, but it’s directly inspired by a high-octane past. The Mustang name is not put on any old car, and its styling reflects this. It’s muscular from all angles, with the front being particularly sharp and bulges from every angle.

Unlike Mustangs of the past, however, there’s no engine to keep cool. The grille therefore a one-piece plastic affair that moulds neatly into the bumper. Of the two cars, the Mach E is definitely the one that can claim to be more of an SUV. It’s a little taller than the Polestar, and round the back you’ll find a swooping roofline and a pair of tail lights that are unmistakably Mustang – if the prancing horse didn’t already give it away. 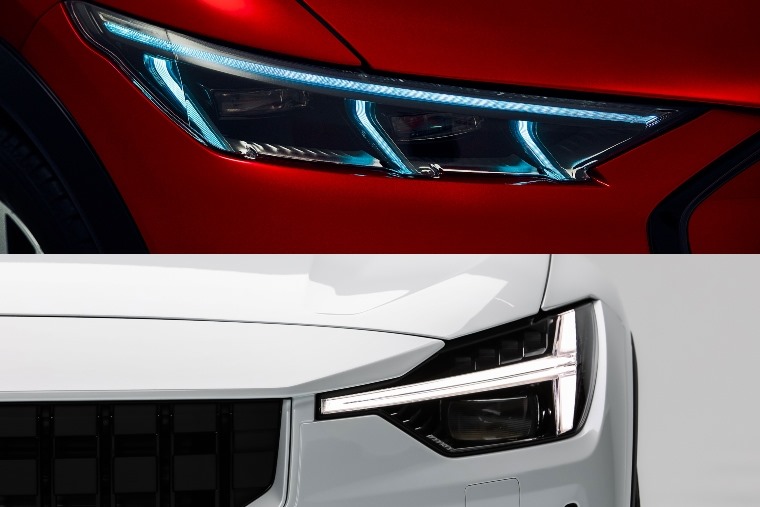 In the looks department, the Polestar 2 is more subdued. It’s still imposing and certainly a sporty looking car, but up front there are less bulging lines and it gets a more defined grille in contrasting black. Although the Polestar is very much a brand in its own right, the influence of Volvo is still strong, particularly when it comes to the light design.

As a car, the Polestar 2 is more hatch than SUV too, although in terms of proportions (and outright size) it’s very similar to the Ford. The rear end is more raked, with the boot featuring a notchback taillight, where you’ll find an integrated tail light bar that runs the width of the car. The lines are clean and sharp, which arguably gives the Polestar a slightly more premium look than the Ford. 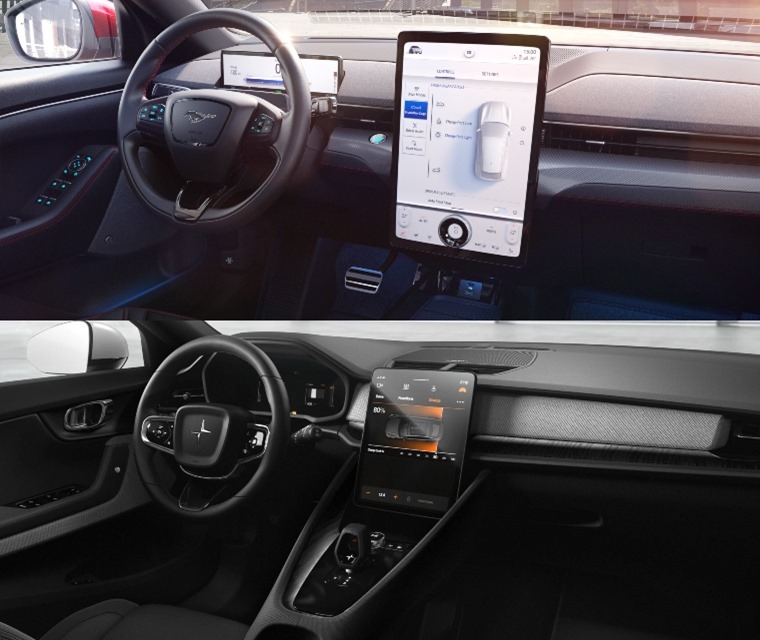 The Mach E’s cabin is impressive. It’s taken the best bits about a Tesla, and somehow made it better. The infotainment system is operated via a huge 16in touchscreen in the middle of the dashboard. It’s very similar to Tesla, with most features operated via this screen. You’ll find the heating and climate control functions at the bottom of the screen, with the larger upper portion displaying the satnav and sound system, among myriad other functions.

The Mach E feels like a premium product too, with the interior benefiting from “vegan-friendly” materials that are exceptionally well-screwed together. In the rear, there’s plenty of room for adult passengers and, thanks to a flat floor, you can quite easily accommodate three people. In the boot, there’s 402 litres of capacity – not exactly terrible, but not class leading either. You’ll also get an extra 100 litres in the “frunk” – although that’s primarily used to store your charging cables.

In some ways, the Polestar’s interior is very similar to the Ford’s. For starters, the layout of the infotainment system is like for like, with the Polestar 2 getting a large, portrait set-up too. Even the heater controls are in the same place, and the driver gets an equally vivid digital display in front of them too. Quality wise, the Polestar comes out on top. The Ford’s build quality is good, but it can’t trump the thought and details that have gone into the Polestar.

Everything feels extremely premium, with the dashboard, air vents and door handles featuring that minimalist, brushed aluminium look. Also like the Ford though, you’ll find the entire interior is vegan friendly and are sourced from sustainable and recycled materials.

The Polestar is a practical family vehicle, although room in the rear isn’t quite on par with the Ford. The boot is also pretty much like-for-like, with 405 litres on offer. The frunk is smaller though, at just 35 litres. That means neither of these cars offer the outright load lugging capacity of a Tesla Model 3. That said, the Polestar’s rear seats are very adaptable and, if you fold all three flat, you’ll extend your load area to more than 1,000 litres. 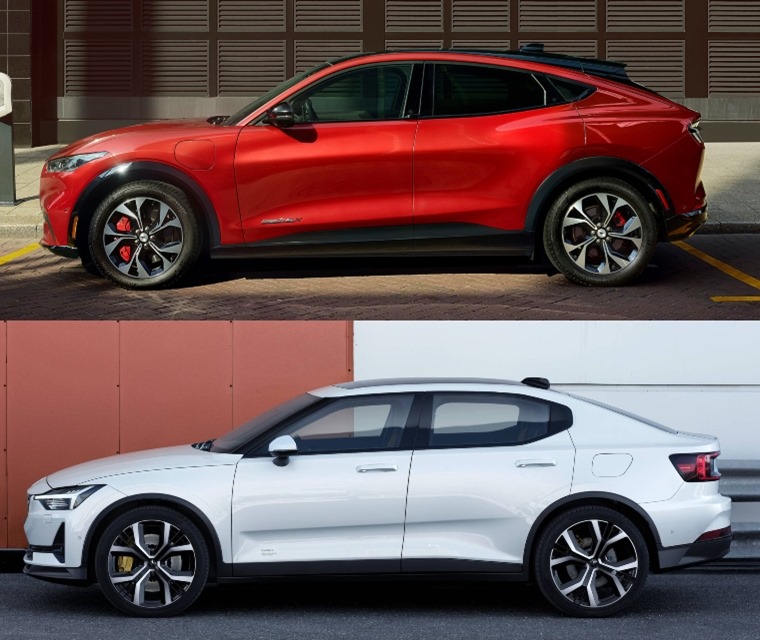 Let’s talk power. The pair are both available with a range of potent electric motor options, and can be specified as two or four-wheel drive.

The Ford range kicks off with the Standard Range model, which features a 70kWh battery. Two models are available – a rear-wheel drive and all-wheel drive, and both produce around 275hp. You’ll get from 0-62mph in less than seven seconds, and the battery will manage around 250 miles before it needs charging. Next up is the Extended Range models, which again can be specified as rear or all-wheel drive. 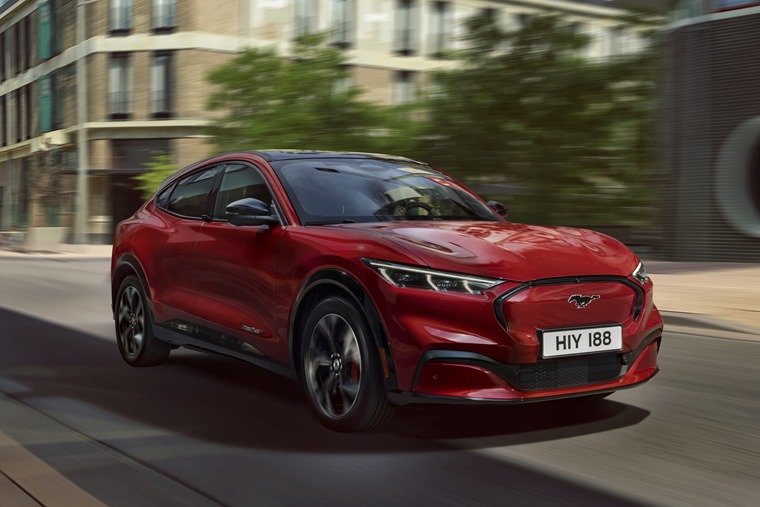 That Mustang name isn’t just given to any car though, and as such the Mach E proves that you can create a really sporty-feeling EV. Despite being a relatively high-riding SUV, it’s great fun to drive – particularly if you plump for one of the higher powered models. 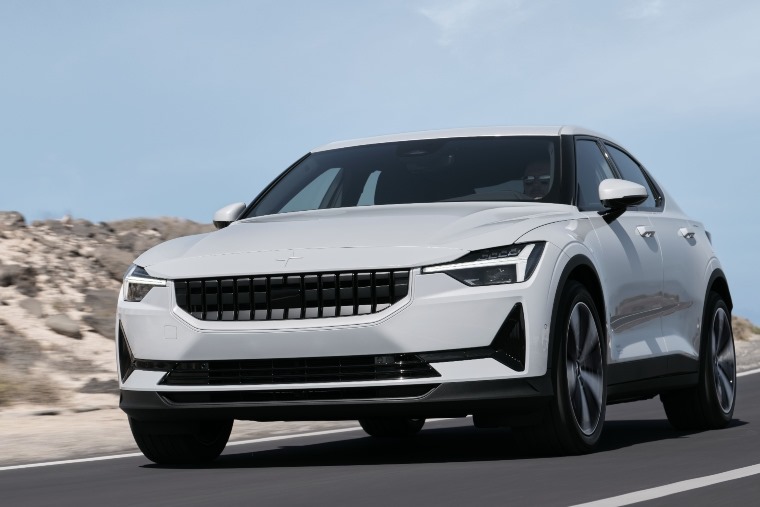 It gets an official range of 292 miles, while the 61kWh Standard Range offering 273 miles, and the Long Range up to 335 miles – very similar to Ford’s figures then. On paper at least. But how does it drive?

It’s a slightly more relaxed feeling than the Mach E, particularly on motorways. While the standard models – and the performance variant – aren’t quite as quick as the Ford – it still delivers power in a way only a premium EV can. The regenerative braking system is endlessly adaptable too, with one-pedal driving adding further to that relaxed feel around town. 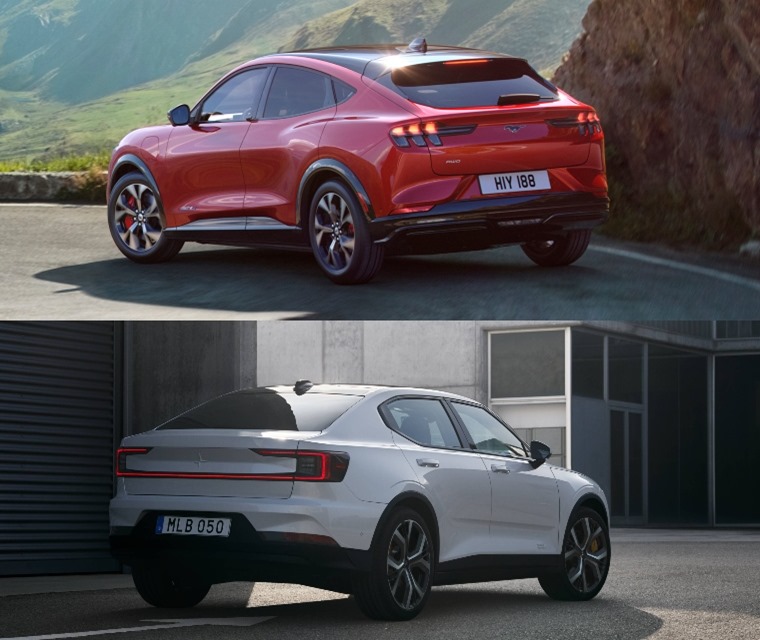 This is a tricky one. Both these cars offer a fantastic alternative to a Tesla and, while they are similar in lots of ways, the styling and overall feel of the pair are actually quite different. The Mustang Mach E is a tad quicker, and there are more options when it comes to drivetrains and batteries.

But in the real world, the Polestar’s performance is equally as impressive – and it’s got a slightly bigger official range too. In many cases, deciding between these two will be a matter of personal taste. Do you want the all-American muscle car reborn for 2022, or an understated and classy Swede that wafts you around in supreme comfort?

If it comes down to price, however, at the moment you’re best off with the Polestar. Monthly prices and total lease costs currently undercut those of the Ford, with monthly payments from less than £400. You can check out Polestar 2 and Mustang Mach E deals right now by hitting the button below. Or alternatively check out another electric head to head – the Hyundai Ioniq 5 vs the Kia EV6.