The arrival of the Cupra Born has hotted up things for the Volkswagen ID.3 in the electric hatchback segment. Which one is the best to lease?

Electric cars are coming thick and fast across the new car market. We recently compared two Korean SUVs – the Kia EV6 and Hyundai Ioniq 5 – but now things are hotting up in the hatchback segment too. 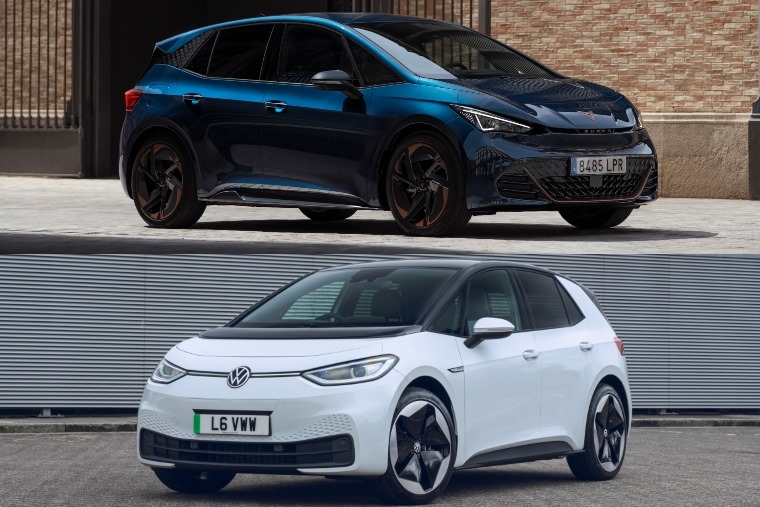 Volkswagen’s ID.3 is quickly establishing itself as a go-to family EV. But now there’s a new contender – the Cupra Born. It’s actually based on the same platform and uses much of the same formula as the Volkswagen, but which one should you lease?

What does the Cupra offer that the Volkswagen doesn’t? Below, we’ve compared them side-by-side to help you decide. Let’s jump into it.

The pair share the same general proportions and are around the same size – no surprise really, considering they are more than a little related. They’re even produced in the same factory.

The ID.3 is the older of the two, but still looks like a sleek and modern car compared to many combustion-powered rivals. Its thin grille, cool wheel designs and contrasting roof colour gives it a smart, minimalist look.

The Cupra on the other hand, gets a much more aggressive front end. All models also come with at least 18in alloys, with 19in and 20in options on the cards further up the trim hierarchy. 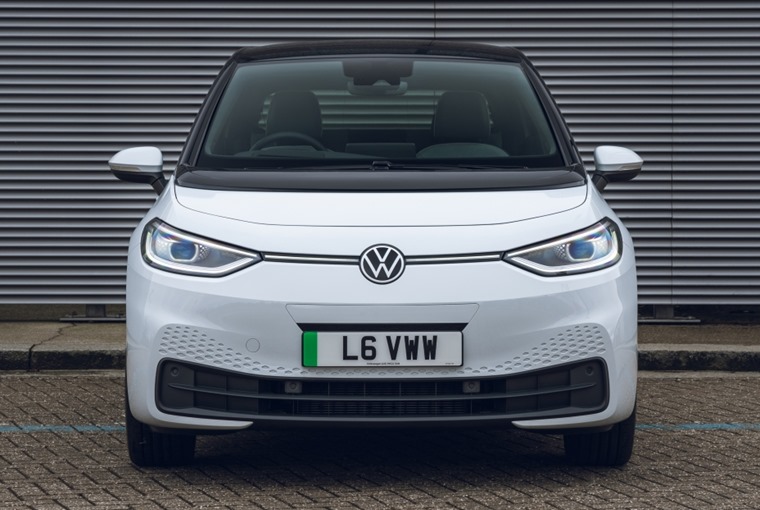 The headlights are more poised and the grille is larger and lower. The bumper also features a large honeycomb vent where the VW gets a simple yet elegant spoiler.

From the side, however, it’s possible you could mistake the Cupra for the Volkswagen and vice versa. The lines are the same, as is the rear end bar a few sporty touches on the Born. The most notable difference in some ways is the way you can specify the cars.

While the ID.3 boasts bright, friendly colours, the Cupra is available with contrasting copper colouring on the wheels and trim. It looks fantastic now, although it’s arguable whether the look will age well. Although if you’re leasing, that’s shouldn’t be a particularly big worry. 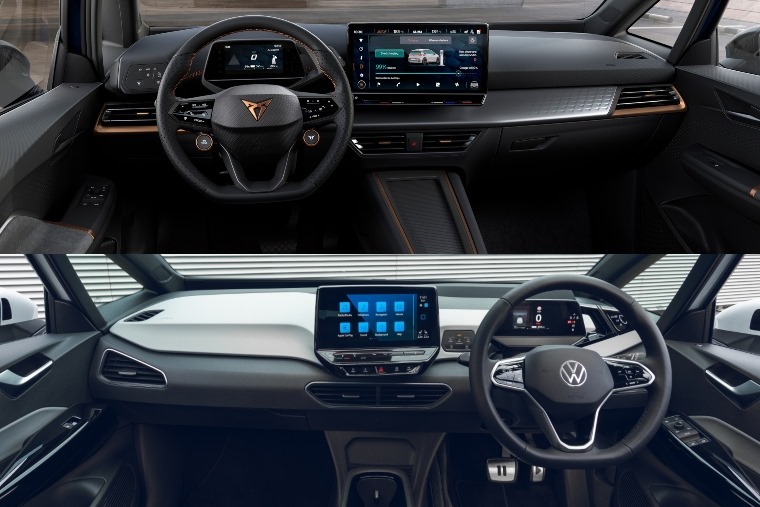 Let’s talk trim levels. On paper, the Cupra gets more kit from the off, but that’s mainly due to the ID.3 being slightly older. For example, the Cupra gets a 12in infotainment system and, thanks to a recent update, so does the ID.3.

In fact lots of the tech is carried over. Whether you opt for the V1, V2 or V3 Cupra, there’s plenty of standard equipment. Entry-level V1 models get a rear camera and 5.3in digital driver display – as does the Volkswagen.

If there’s another area that shows you just how similar the pair is, on the practicality front they offer like-for-like luggage capacity. Both boots have 385 litres of space, and rear passenger room is nigh on identical too.

Where the cars to differ, is the trim on offer. Although both share a similar clutter-free dashboard and touch-sensitive controls, the Cupra’s seats and interior trim pieces are sportier than the ID.3’s. On most models you’ll find that contrasting copper colour is carried over.

Both models come with all the tech you’ll need though, with the majority of functions controlled via that large 12in touchscreen. While the system isn’t the best on the market, it gets satnav and is compatible with both Apple CarPlay and Android Auto. 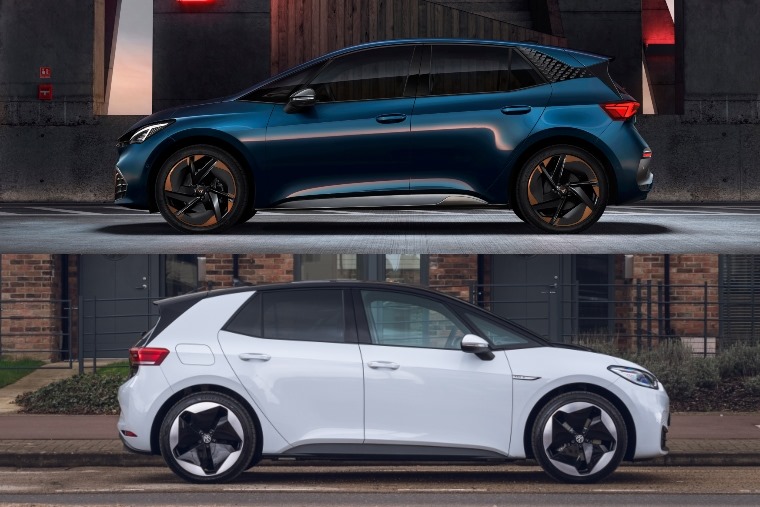 For the Cupra, this is where things really matter. It might be based on the same platform and feature a similar level of equipment, but given that sporting Spanish badge, you might expect it to offer the more poised and exciting driving experience.

Well, from launch the Born is available with – you guessed it – the same line-up of motors and batteries as the ID.3. Both models kick the ranges off with a 45kWh battery pack that produces only 150hp. Both take 8.9 seconds to get from rest to 60mph and both offer an official range of between 210 and 215 miles.

The better option for both cars, would be to opt for the larger 58kWh battery pack. This ups range in the ID.3 to around 260 miles, and is available with a 150hp or 204hp electric motor. With the Cupra, the larger battery is only on offer with the more potent electric motor and drops 0-60mph times to 7.3 seconds.

Whichever you go for, we reckon this is the best option. The ID.3 is already available with an even larger 77kWh battery pack that ups range to more than 330 miles, and this is expected to arrive as an option for the Cupra in 2022 too in the form of the Born e-Boost. These models also get a boost in hp, up to 230hp.

From behind the wheel, the Cupra feels a little more sporty. Whether that’s thanks to the trim and sports seats is debatable, as except for the adaptive dampers offered as an optional extra, it’s pretty much like-for-like with the Volkswagen as far as body control and agility go.

As for charging, well things are like-for-like too. Using a rapid charger at a rate of 170kW, both the Cupra and Volkswagen can get from 10% charge to 80% in around half an hour. 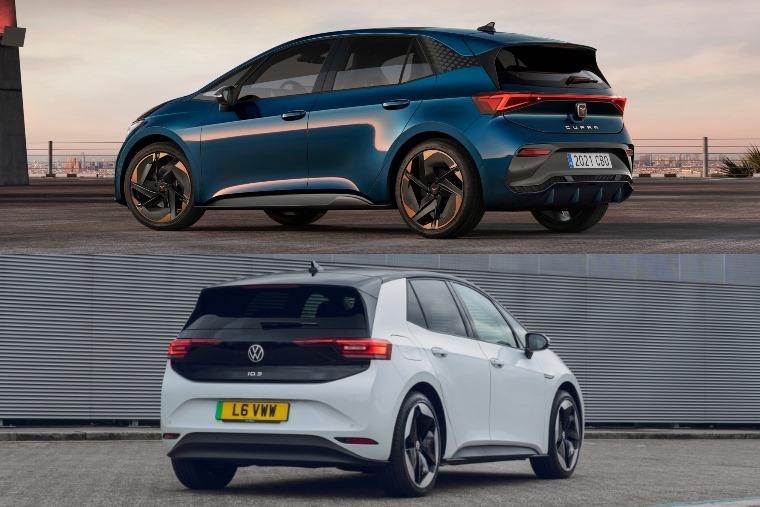 Two cars. One electric platform with similar levels of tech. This is a difficult one. The important thing is when you’re deciding, it should be the styling that should be the main deciding factor; for now at least, the Born doesn’t offer a significantly sportier drive than the ID.3.

That’s not to say it isn’t a great choice, but if you were expecting a hot electric hatch, then it’s not quite there yet. It looks great in its sportier shell suit though, and for day-to-day driving, it’s every bit as easy to live with as the ID.3.

The ID.3 doesn’t have the associated baggage of trying to be sporty though and, at the moment at least, it’s more affordable to lease in the vast majority of trims and rental profiles. If the Cupra Formentor’s popularity is anything to go by though, the Born might just become the more popular model. Time will tell.

Considering going electric? See how the ID.3 compares to the larger ID.4, or check out our comprehensive A to Z of the EVs available now and coming soon. Or jump straight into comparing EV leasing plans by hitting the button below.