There’s a lot of love for Suzuki, the plucky underdog. In a competitive segment, the Vitara has a few aces up its sleeve and a ride that’s arguably better than most of its rivals.

When the latest Vitara turned up in 2015, it went down well. A lightweight sturdily built medium-sized SUV that has real off-road capability and a sensible balance of performance and economy. 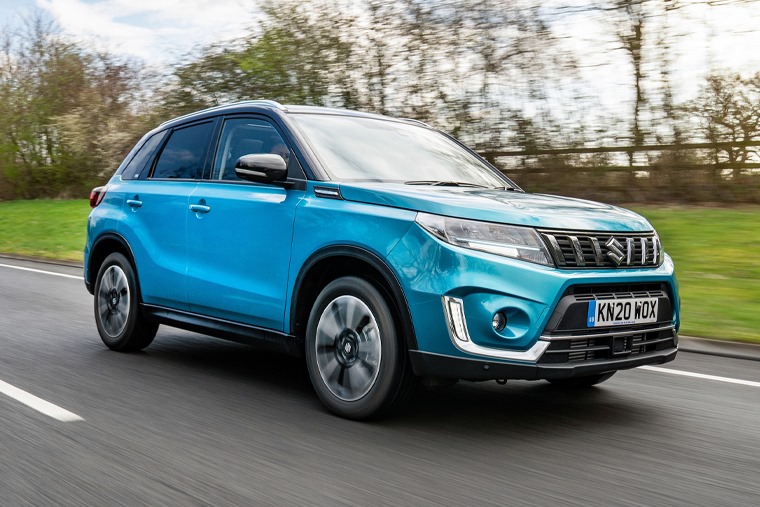 Time moves on and, as other shiny new models have been launched (the impressive Ford Kuga, Skoda’s Kamiq, and the sensible Volkswagen T-Cross to name just three), it’s easy to notice the areas that the Vitara falls short. Fortunately, Suzuki has given its SUV a mid-life refresh in a bid to keep it competitive.

Chief amongst those changes is a new mild-hybrid system bolted on to the well-liked 1.4-litre Boosterjet engine. The change saps a bit of power, dropping down to 129hp from the previous 140hp, but it adds extra torque, improves fuel economy and reduces emissions. As performance hasn’t been affected at all, it’s a win-win situation - at least on paper.

Over a week of mixed motoring, from motorway runs to bodging around congested town centres, the Vitara returned an economy figure of 40.4mpg, only slightly down from its official combined economy figure of 45.4mpg. Given that, I’m happy to claim it’s as frugal as it claims to be. 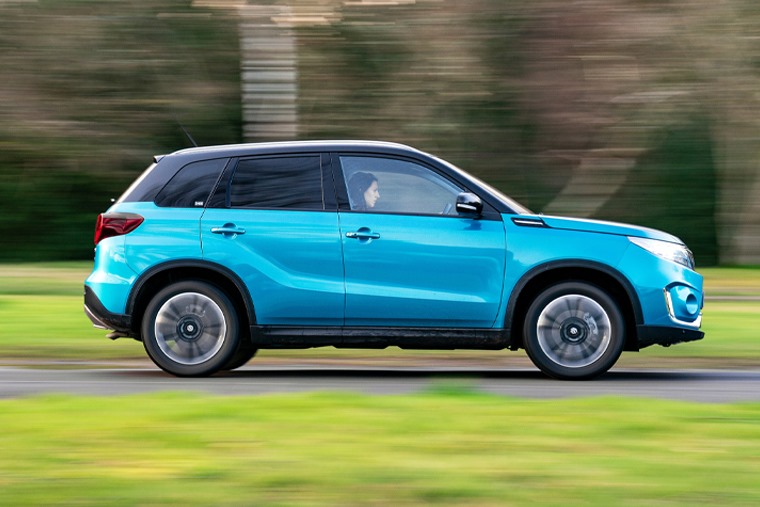 I’m also happy that Suzuki’s claims for its performance are as accurate as you can expect. Officially, the Vitara will hit 62mph in 9.5 seconds, exactly the same as the previous model, and it feels every bit as quick as that. Mid-range acceleration is decent too, thanks mostly to the lightweight nature of the Vitara rather than the amount of power on offer.

The Suzuki has a decent amount of tyre to absorb bumps and, with that light chassis and body, doesn’t need particularly stiff suspension to keep it under control.

It rides well, too. By sticking with 17-inch wheels, rather than supersizing them up to 18 or even 19 inches, the Suzuki has a decent amount of tyre to absorb bumps and, with that light chassis and body, doesn’t need particularly stiff suspension to keep it under control. The result is a ride that’s arguably better than most of its rivals, without sacrificing handling. That said, a mid-corner bump can unsettle the car slightly when travelling at speeds probably beyond those that a VIatara should be driven at. All the controls are light and easy to use, backing up the don’t-drive-me-flat-out message the chassis gives. 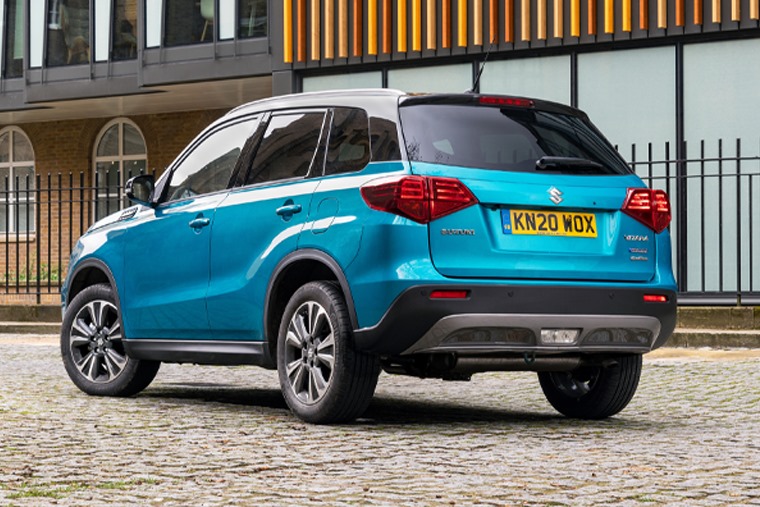 Venture off-road and the AllGrip four-wheel-drive system tries hard to keep you under control, preventing the car getting stuck in the mixed conditions I put it through. Even leaving a wheel or two floating in the air won’t stop it, but I imagine the Darian Gap might. 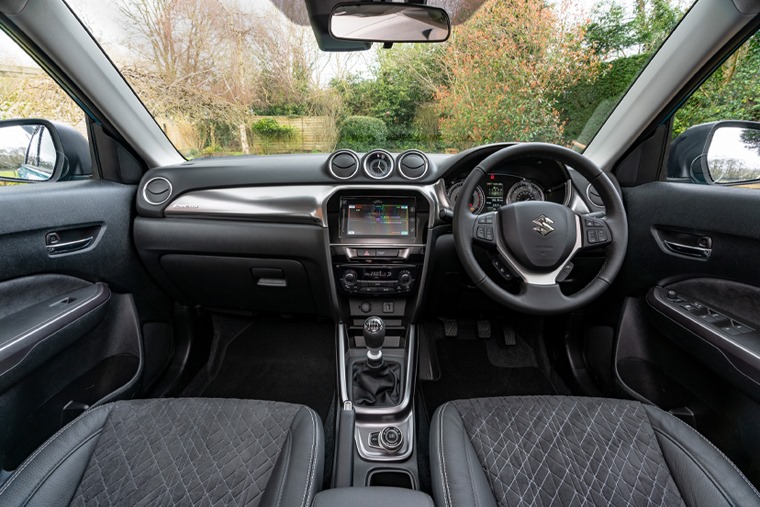 The interior has taken a step forward too, which was needed as the car felt a little cheap even at launch. The basic layout remains, with three circles sitting atop the dashboard, above the glossy centre stack. A metallic-looking panel has been added that sweeps across the width of the car which has an almost liquid0like finish that adds real depth to the cabin.

The basic layout remains, with three circles sitting atop the dashboard, above the glossy centre stack.

The infotainment system operates through a 7.0-inch touchscreen. It’s not great but, fortunately, there’s both Android Auto and Apple CarPlay available so you can bypass the system entirely. If you are stuck with what’s fitted, the navigation is actually pretty good and easy to use, but doing something as simple as finding a digital radio station needs training and years of practice.

The rear seats offer just about enough legroom, although there’s something under the front seats that prevents you from sliding your feet all the way under. On this model fitted with a glorious panoramic roof, rear headroom is poor - if you’re transporting adult passengers in the back frequently, it would be worth looking for a lower-spec model without the glass. 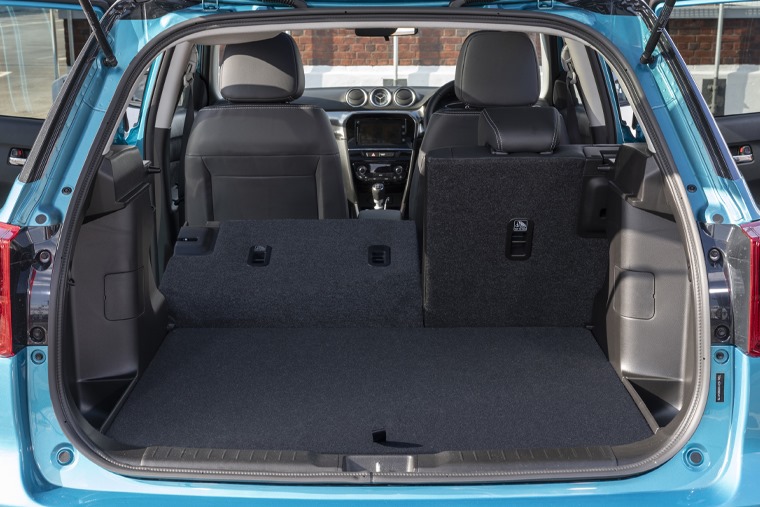 Storage capacity in the back is par for the course, with 375 litres of space available. That’s more than you’ll find in a Fiat 500X, but less than any of the rivals mentioned earlier.

The Vitara usually ends up cheaper to lease which might allow you to overlook a couple of its shortcoming.

Does it all add up to an option you should seriously consider? There’s a lot of love for Suzuki, the plucky underdog that consistently comes up with cars that are just a little bit different, that are built well and are well priced. However, newer rivals are more practical, plusher and every bit as frugal, which makes it difficult to build a really strong case for the Vitara.

But it’s got a couple of aces up its sleeve; none of its obvious rivals offers a four-wheel-drive option, which might well be a critical omission, and the Vitara usually ends up cheaper to lease which might allow you to overlook a couple of its shortcoming.